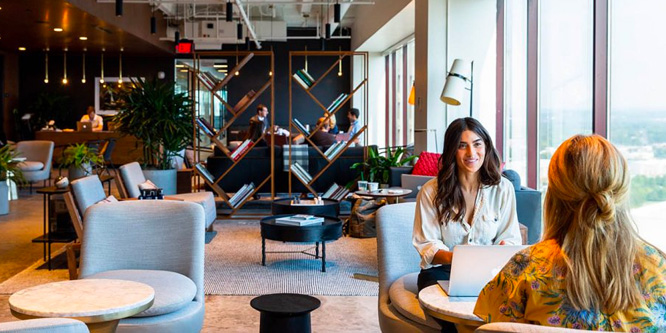 Mall operators have been struggling to replace big name anchor stores that have closed over the past few years throughout the country, whether due to underperformance or chainwide bankruptcy. One of the latest tactics is by filling the vacancies with coworking spaces.

Mall owner Macerich has partnered with coworking company Industrious at a mall in Scottsdale, AZ to fill a former Barney’s with shared office spaces, according to CNBC.

The multi-property deal is reportedly the first of its kind, but with the coworking model predicted to grow 25 percent yearly through 2023, there will likely be plenty of companies like Industrious, WeWork and Regus looking for spaces in which to expand. Industrious currently has around 50 locations nationwide. Macerich owns more than 50 malls across the country, according to its website.

Shared office spaces have grown in popularity as they allow urban entrepreneurs, freelancers and other employees that work remotely to have a place to go other than coffee shops and other spaces open to the general public.

Retailers and tech companies have been getting more hip to the model. J.Crew and LinkedIn, for instance, recently collaborated with shared workspace giant WeWork on a series of discussions about entrepreneurship.

Shared office spaces have also been making moves into retail on their own. WeWork announced last month that it was launching WeMRKT, a shop dedicated to selling products created by users of the WeWork workspace.

Last year, for example, Southdale Center Mall in Minnesota announced that it would fill a spot occupied by J.C. Penney with a three-story health and fitness center set to open in 2019.  Other malls have placed grocers such as Wegmans and Whole Foods 365 in their vacated anchor spaces.

And the discussion, as reported recently on PYMNTS, has even extended to malls adding apartments or hotels as a new type of anchor that brings a built-in clientele to the rest of the mall’s stores.

DISCUSSION QUESTIONS: Do coworking spaces offer malls a good solution for both filling available space and situating resident shoppers? Should malls consider retooling their retail mix to better suit the people using coworking spaces and, if so, how?

Please practice The RetailWire Golden Rule when submitting your comments.
Braintrust
"Successful mall owners are looking for more and interesting experiences to offer and this sounds like a good one."

"This is a larger conversation about land use, sustainable development, and righting the suburban real estate wrongs committed in the 1950s-1990s."

"If the strategy is to fill space to replace retailers (which is critical) focus on that. Don't pretend that you are bringing new shoppers to the mall."

Scottsdale Fashion Square is my local mall. It is very successful and constantly crowded. However, I think Macerich has struggled to find a tenant for the big space that Barney’s exited some time ago.

A shared working space is a sensible solution. I know a lot of people who work from home or work independently who would use such a facility. I just hope that they have a range of working options which are very flexible to allow for all working needs.

Malls need to become relevant for today’s customers. Fitness centers and co-working spaces are two good examples of using mall space to attract people who will make regular, routine trips to a central location. The question for the mall owners is the business model. Will co-working spaces generate enough rent per square foot to replace retail rents? Probably not. On the other hand, some rent is better than no rent … IF the renters bring enough foot traffic back to keep some retail space viable.

I agree with you, Chris. Some rent + extra foot traffic is better than no rent and less foot traffic.

No, it doesn’t. Malls need customer traffic. To rent out bigger mall space to coworking office can only be a nice add-on my opinion. Malls need to look for solutions that create customer traffic. I see more e-commerce players who are trying out physical store solutions like fitness centers and other formulas that would drive more traffic to the mall than a coworking office. With less traffic, the remaining store tenants will simply die off over time in that mall.

In the growing gig economy, this is a great way for malls to leverage the trend and fill empty inventory. However just as traditional offices are increasingly being shunned, so to are the traditional 9 to 5 so participating malls will have to adjust to best meet the needs of the shared workspace market.

Mall operators, keenly aware of the dwindling number of store locations in their malls, are aggressively trying new avenues to keep spaces filled and revenue flowing. I suspect that they will continue to throw things against the wall and see what sticks. They can experiment and determine what works, what consumers just love and what is a learning experience that doesn’t work.

Successful mall owners are looking for more and interesting experiences to offer and this sounds like a good one. The shared office space business is growing and this is a great way to accommodate both the malls and the need for affordable space. Assuming it is indeed affordable. Is this concept going to work for every mall? No, but it is great option to consider if the shoe fits. For my 2 cents.

One must be realistic about their strategy. If the strategy is to fill space to replace retailers (which is critical) focus on that. Do not pretend that you are bringing new shoppers to the mall. Yes, some users of the co-working space will buy lunch, pick up supplies and do a little convenience shopping, but we are talking about a little.

Focus on filling the space — co-working, fitness centers, movie theaters, anything that pays some rent. Do not fool yourself that this will create a retail turnaround in your mall.

Office eats mall. Housing eats office. Woman inherits the earth? This is a larger conversation about land use, sustainable development, and righting the suburban real estate wrongs committed in the 1950s-1990s. We’re having to reinvent the whole dang thing: How we work, which now will sometimes happen in malls, where we live, which will now happen in renovated offices, and how we share space and move in it without running each other over. Mall owners hip to the zeitgeist, who are creative and curious, will usually come out ahead, but that could be said of any retailer with a lot of property who dares to take a risk and do something interesting.

This ain’t particularly a new thing. These ULI reports go back to the early 2000s:

Those big empty stores aren’t going to fill themselves, and it’s unlikely that existing retailers will step up to fill them. It makes sense for malls to seek unconventional tenants like grocers and co-working spaces. Let’s hope these tenants will be enough to bring new traffic to the existing retailers.

We moved our offices to Main Street because we wanted to be around retailers; co-working at a mall sounds like a good time to me.

I strongly agree with Chris Buecker’s comments. This will have a limited affect on mall businesses UNLESS they are a dry cleaner or convenience mart (but only if there are a good number of workers occupying spaces).

I know for mall owners it’s a revenue generator, but I don’t think this kind of tenancy can create the magic needed to convince any retailer to invest and sign a lease. It certainly is not the long-term answer for a mall.

This is a welcome development, as the sharing and global economy are increasing the sheer number of remote workers. In addition, with all of our digital connectedness and the ability to work offsite, we should expect the amount of remote virtual office work to increase 30 percent to 40 percent in the next several years.

In the effort to meet this increasing need, malls such as the one owned by Macerich, have a prime opportunity to redefine their purpose, provide an affordable flexible option for this remote workforce and in part help to make the mall a relevant and lively place again.

We have seen companies such as Spacious in NYC partner with restaurants to provide remote workspace solutions during the off hours, so why can’t malls follow suit? Now if you add a top-level gym, an upgraded food court and unlimited cold brew, then people will flock back to the malls and maybe even go to one of the retailers there.

Some ideas just make sense and this is one of them. Coworking spaces are a popular option for a lot of workers, malls have space and usually are well-located with lots of nearby transport connections (and parking) so why not? The set-up helps to bring a new mix of people into the mall and hopefully this will translate into higher spends in the other stores in the space. I can see that coffee shops located in malls with coworking space will do well. I am not so sure about massively changing the retail mix to suit people using the coworking spaces though — remember these aren’t just people who do work but have families, holidays, anniversary, hobbies and interests and more to buy for. I think malls should focus on having a good retail mix that’s attractive for their core customer base in general.

WeWork is booming! The 9 to 5 model for many does not exist. All generations of workers have made the move to remote work. Not a new concept. Over the past decade, retailers have struggled, some collapsing upon themselves. Most malls are cavernous, with acres of free parking, accommodated by being a destination usually requiring a car or other form of transportation.

Will malls be the new go-to space for co-working? It depends. Malls are diametrically the opposite of inner-city walking, biking neighborhoods, where workers can imbibe coffee in quaint and cozy settings to talk shop. No doubt there will be a few malls, creative enough to attract and compete with WeWork’s inner city concept. Otherwise, it is all just more traditional office space.

A great example of a consolidated retail/community destination is Stanley Marketplace in Aurora (Denver) Colorado. Not only does Stanley Marketplace combine retail services with workplace facilities, but also provides space and activities specifically designed for children as well as events for the entire family. Stanley Marketplace goes beyond the standard concept of a retail mall to that of a community-focused asset enhancing all aspects of day-to-day life.

Yes, yes and YES! Innovation is the driver of success. Mall management has got to get creative with all the vacant space across the country. Sure, there are some very successful all-retail malls, however, the big picture shows that evolution toward the ideas mentioned in this article is the key to future growth.

Braintrust
"Successful mall owners are looking for more and interesting experiences to offer and this sounds like a good one."

"This is a larger conversation about land use, sustainable development, and righting the suburban real estate wrongs committed in the 1950s-1990s."

"If the strategy is to fill space to replace retailers (which is critical) focus on that. Don't pretend that you are bringing new shoppers to the mall."