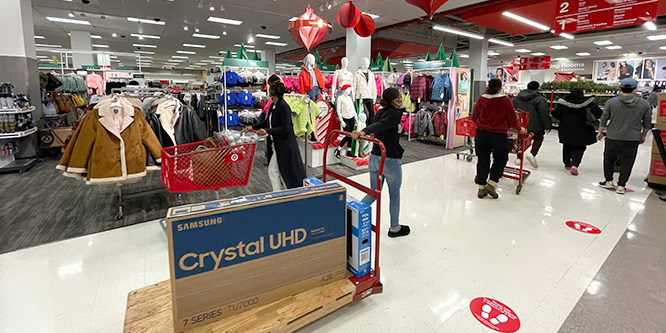 Target is not standing on its laurels. The retailer announced earlier this week that it is making changes to its executive leadership team with continuing improvement and growth as the focus.

Christina Hennington was named executive vice president and chief growth officer for the retailer. Ms. Hennington has been with the company since 2003 and “was instrumental in the retailer’s efforts to modernize its merchandising organization, leading the industry by blending its physical and digital buying functions,” according to a press release announcing the move. In her new role, she will work across the organization to identify and act on ways to deepen Target’s relationship with its customers and drive sales.

Jill Sando, who has been with Target since 1997, is being promoted to executive vice president and chief merchandising officer. In that role, Ms. Sando, called a “skilled merchant” in Target’s announcement, will lead buying for all of the retailer’s hard and softline categories.

Rick Gomez, who most recently served as Target’s chief marketing, digital and strategy officer, has been named executive vice president and chief food and beverage officer. Mr. Gomez, who joined Target in 2013, has received kudos for launching the chain’s loyalty programs and playing a major role in driving its digital growth. His experience managing major brands for companies including MillerCoors, PepsiCo and Quaker Oats for more than 20 years is expected to help elevate the retailer’s grocery business, a key traffic driver for Target’s stores.

Cara Sylvester is moving into the executive vice president and chief marketing and digital officer role. Ms. Sylvester, who started with Target in 2007, has served in a variety of merchandising and strategy roles. She most recently served as senior vice president of home for Target, which achieved sales and market share gains under her leadership.

Target CEO Brian Cornell credits much of the chain’s success during his tenure to “the depth of experience” among its executive leadership team. He said the changes just announced will “create new opportunities” for the team members to further elevate Target’s position as a “best in class retailer” in the near and long term.

The retailer posted a 17.2 percent increase in same-store sales during the holiday season driven by a 4.2 percent gain in store sales and a 102 percent jump online. Target, which saw both traffic and ring increases, said it gained market share across its five core categories over the last two months of 2020. It is expected to report its quarterly results on March 2.

DISCUSSION QUESTIONS: How does Target’s executive leadership stack up against its retail industry peers? What do you expect to be the practical outcome of Target’s creation of the chief growth officer role within its team?

Please practice The RetailWire Golden Rule when submitting your comments.
Braintrust
"I have high regard for Brian Cornell and his ability to place the right folks in the right seats."

"There’s still some runway from existing strategies, but longer-term Target will need to explore new initiatives if it is to keep up the momentum."

"Target has done a terrific job of developing future leaders from within. Give Brian Cornell credit for recognizing talent, developing them and promoting when ready."

Target’s leadership, from the top down, stacks up very well. The team is experienced, savvy, and unafraid to take calculated risks. Most importantly leadership is very customer-focused. I’d say it’s one of the best teams in retail.

The creation of a chief growth officer role is interesting and reflects the fact that Target needs to work harder to achieve growth. So many gains have already been made and a lot of opportunities have been exploited. There’s still some runway from existing strategies, but longer-term Target will need to explore new initiatives if it is to keep up the momentum.

The only way to grow domestically is to take share from others. Who will they take share from? Those operators without the skilled and forward thinking management and resources of Target, Walmart, Amazon and a very few others. Who will get hurt? After we write the obituaries for department stores, it will be the little and local guys who can’t compete.

I believe the leadership bench for Target has been deep and the changes will strengthen the bench even more. I see the chief growth officer as the chief digital officer/chief analytics officer (that we discussed last week). Ms. Hennington’s job will be to work with all groups that have a hand in driving sales.

In my opinion, of the many things that Target does very well, food and beverage is not among them. I believe that moving Rick Gomez, an accomplished leader with CPG experience, to run that portion of Target’s business is both telling and smart. I have high regard for Brian Cornell and his ability to place the right folks in the right seats.

A flexible, progressive strategy helped Target seize new opportunities to thrive during the pandemic. The chief growth officer will pounce on consumer and competitive trends to differentiate Target and keep associates and shoppers loyal.

Target still has big growth opportunities — not only in online sales, which drove its growth in 2021, but also by developing new store formats. There is an empty department store near me being reopened soon as a 120,000 square foot Target store, and there are plenty of vacancies like this one. More importantly — if you look at the list of 2021 openings, many of them are urban locations in small formats, often between 25,000 and 40,000 square feet. This is a wide-open chance for Target to gain share, as long as the right sites are available — the company certainly appears to have the team in place to execute the strategy.

Relentless growth, innovation, and staying ahead of the competitive and disruptive forces requires the right executive leadership team to keep on the right path. Target has done an outstanding job of keeping its strategies laser-focused on the customer experience.

Target’s diversified investment mix of private label growth, fresh and perishables, and beverages makes them a force to be reckoned with in the grocery space. The appointment of Rick Gomez to lead those initiatives is a wise one. Deep and sustainable growth requires the right leadership to navigate through the fiercely competitive landscape. Christina Hennington and the team will be well-positioned to continue driving forward.

Target has done a terrific job of developing future leaders from within. Give Brian Cornell credit for recognizing talent, developing them and promoting when ready. Target’s greatest challenges and accomplishments in the last few years have been on the grocery side of the business. However, these new leaders have the talent and experience to grow this side of the business even more.

Target’s success in 2020 is from taking share from department stores and stores like Bed Bath and Beyond. They come off as an easier to shop and more affordable alternative to those stores.

I think their food program may actually slowly be improving … maybe the fresh food just looks better since the foot traffic in the store has increased so much during 2020.

Braintrust
"I have high regard for Brian Cornell and his ability to place the right folks in the right seats."

"There’s still some runway from existing strategies, but longer-term Target will need to explore new initiatives if it is to keep up the momentum."

"Target has done a terrific job of developing future leaders from within. Give Brian Cornell credit for recognizing talent, developing them and promoting when ready."