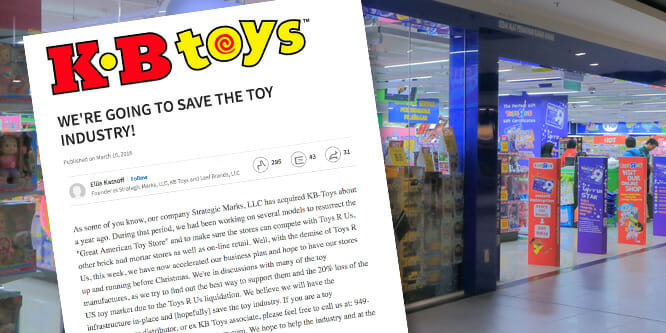 Toys “R” Us is now a part of retail history. But a major competitor from big box retail’s past is planning a return in hopes of filling the void left by Toys “R” Us’s closure.

Elia Kassoff, president of Strategic Marks, the company that currently owns the KB Toys brand, announced on LinkedIn that the company would be accelerating existing plans to relaunch the toy chain’s online and brick-and-mortar presences because of the Toys “R” Us closure announcement. Mr. Kassoff wrote that KB Toys plans to have stores up and running before Christmas.

Strategic Marks’ brick-and-mortar launch is pegged on pop-ups, according to CNN Money. The company is planning 1,000 pop-ups for Black Friday and the holiday shopping season, after which it will decide which locations will remain permanent based on performance and lease availability.

Though competitive with Toys “R” Us for much of its history, the KB Toys brand was, in fact, bought by Toys “R” Us after the KB Toys store chain went officially defunct in 2009. The brand was, as CNBC reported, purchased by Strategic Marks in 2016.

The “About” section of retrodepartmentstores.com states that the plan is to eventually branch out with the brands listed into boutiques, exclusive apparel and, eventually, brick-and-mortar stores. It is not clear at present how far Strategic Marks has pursued plans for bringing these brands it owns back into the physical world.

Mr. Kassoff is also the CEO of Leaf Brands, a classic candy brand he revived in 2011.

Some big box-era retailers have had trouble with their new-millennium reboots.

For example, Circuit City, after years of chatter about impending relaunches since the brand came under new ownership in 2015, announced in January of this year an online and subsequent brick-and-mortar relaunch.

However, the morning after the scheduled February go-live date, news broke that the website had not launched due to an unexpected deluge of traffic. Since then, the website has displayed the same corporate page announcing something coming soon.

DISCUSSION QUESTIONS: What will KB Toys have to do in order to successfully come back? Is the strategy of launching pop-ups during the holiday season a good first step to take?

Please practice The RetailWire Golden Rule when submitting your comments.
Braintrust
"I like the idea. I guess I’d have to see where the KB stores 'pop-up' and what the digital strategy will be. "

"Heavens, not EVERYONE in the world shops online 100 percent of the time, and there is that impulse buy factor."

"Holiday pop-ups are a good place to start for any toy retailer. Then again, a Times Square holiday pop-up was a big part of the TRU comeback strategy."

It was a dirty, dingy group of stores a decade ago — I don’t get who would clamor for that experience again with piles and piles of toys and no merchandising. Didn’t Toys “R” Us show that doesn’t work?

At the tail end, they had too much product but people LOVED the experience of finding a great deal and knowing they could do this in a short period of time in the mall.

Deals — seriously, in a mall — on toys? KB never had any experience with online retailers and I doubt they could do it now either.

Toys, like electronics, have become a commodity business, one dominated by a handful of brick-and-mortar and online players. Without proprietary and exclusive products, I don’t see how KB Toys can make it during the holiday season.

We will have exclusives and collectables just as the original KB Toys. To say they are all a “commodity business” is incorrect. Private Equity and greed killed both KB Toys and Toys “R” Us, not the market. Toys “R” Us made more than $350 million in profit this year but had that $400 million debt payment to make thanks to Bain, Vornado and KKR.

This is going to be a tough road to revive this brand and category. The key is to be able to have the latest and greatest toys available. But even then, those products will be available on Amazon.com, Walmart.com and many other places.

Couple that with the move to more electronic games and they will have their hands full.

I do think it is very smart to build pop-up stores as a revival strategy. This keeps costs down, does not commit the company to long-term leases and allows them to test the waters before committing. This will also be a great help to mall operators who have excess space from store closings.

It will certainly be interesting to watch and I admire the approach.

Many of you are forgetting that toys are an impulse item. You can’t turn to your crying kid and tell them you are going to buy the product online and they will get it in a few days. We will have that online option with more inventory for the holidays, and have an amazing selection of product.

A mom can find a “shut up toy” in the grocery store, drug store and gas station. They have PLENTY of places for impulse items without going to the mall.

The difference is we’re working with people in the toy industry who know how to sell toys.

KB Toys will need to have a digital strategy in order to be anywhere near successful in a come back. I am not sure they can do that in the limited time before the Christmas season. Their strategy of launching pop-ups during the holiday season may not work either. Walmart and Target now own the toy market and without Toys “R” Us they can only get stronger. KB did not make it against Toys “R” Us so why would they think they can compete with the likes of a Walmart or a Target? KB Toys needs to consider major ads on children’s programs and need to get online fast in order to do any real successful business in this category. KB Toys and Toys “R” Us belong in the history books!

Walmart and Target will expand their toy selection but will not become toy stores.

KB Toys has an opportunity to be successful and possibly become a major toy store player. One-thousand pop-ups is a brilliant first step and I like that they’ll wait until after the holiday season to see which ones will remain permanent, so they are not committing to too much debt long-term.

KB has to realize that every retailer who sees an opportunity with toys will attempt to go after that business, so they must focus on being different and the new toy brand leader. With the right locations, promotion, toy selection, technology, prices and service, KB has a real shot of gaining significant market share, enough to take them to the next step which would most likely be additional pop-ups followed by full brick-and-mortar locations, whether in malls or free standing.

Let’s hope they have the right leadership and enough dollars to back them up, and if so they just might become the toy store of the future.

Someone who gets it!

Sadly, this sounds more like a case of wishful thinking than a commercially viable plan.

KB Toys may get some traction from toy manufacturers and suppliers keen to see another player in the market. Getting customers to shop there is another matter.

What is KB bringing to the party that Toys “R” Us wasn’t, and how are they planning to compete on price/range/convenience/etc. with Amazon, Walmart, Target, and others? I am not sure there are clear answers to those questions.

We already have millions of people waiting for KB to come back. These are the people who were the KB kids and will now take their kids into KB to share the experience. We have proven this model over and over with our other projects.

I doubt anyone is clamoring for the crowded, dirty, discount environment that was KB Toys in underlit and poor locations in malls — much less millions. They didn’t come back to Toys “R” Us no matter how much Toys “R” Us wished, either.

Leveraging an old, defunct brand name is clever. There is a sense of “I know them from somewhere.” But then avoid the errors of the past. Yes pop-ups and a smaller format is a good move. Use these to get a good geographic footprint, AND marry that with a solid e-commerce base (make it an omnichannel offering as a good differentiator). Most importantly, make it a spot that kids want to go to — to play with the toys and have a fun experience. Fail here, and the revival attempt will be futile!

Yes! You get it, Charles!

I like the idea of pop-up locations, but KB Toys had better be prepared to deliver great merchandising and hire “experience teams” to deliver what shoppers have been looking for in this category. They’re going to need strong relationships with toy brands as well, which they may not have now. A scenario that leaves a lot of unsold inventory in temporary stores is the last thing the major toy brands will tolerate. Maybe it’s best to let sleeping dogs lie.

Pop-ups will be used to get quick traction. Our plan is to work with the largest pop-up companies who have the methodology down and can replicate it. After the season, we then decide which locations will become permanent and shift the inventory. We already have every major toy manufacturing group asking to help to ensure our success.