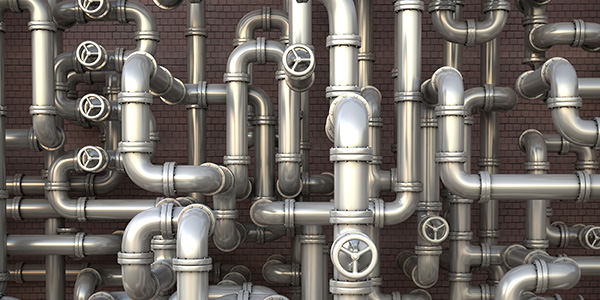 Through a special arrangement, what follows is a summary of an article from Retail Paradox, RSR Research’s weekly analysis on emerging issues facing retailers, presented here for discussion.

It wasn’t that long ago that the IT department drove IT investments. However, now business leaders (mostly) make those decisions. IT infrastructure investments have consequently taken a hit.

The problem is that while parts of IT may be specific to specific uses, a lot more is a shared resource (i.e., the network). And there may be projects that need specific hardware that on their own cannot come up with a business case big enough to justify a large hardware investment.

But if that hardware could be considered as infrastructure for multiple projects relying on that hardware platform … well, now you’re talking about something that enables several — not just one — business case. Taken together, those projects deliver more than enough value to pay for the hardware needed. A case in point: IoT.

If multiple groups within a company each independently decide to take on an IoT project, infrastructure issues may arise if those projects are not coordinated. Users may face network bandwidth challenges if the solution is not architected properly. Incompatible hardware or software decisions may require steep integration costs later on.

One way to avoid this is to pull infrastructure spend from the project and establish it as its own project as part of a portfolio management approach. If an advertising project needs to add digital signs in stores, the digital signage part of the project becomes stand-alone. Both projects enter a limited pilot phase, part of the goal of which is to make sure the infrastructure requirements are well-understood — things like, how much bandwidth to stores do we really need to keep a digital signage network running?

If you look at infrastructure on its own, you’ll never justify it. Using a plumbing analogy, it’s not the pipes that are valuable, it’s what the pipes carry. But if you never invest in pipes, you’ll never have running water. So it goes for retail technology.

DISCUSSION QUESTIONS:
What’s your advice for helping to improve the funding of infrastructure projects amid increasing demand for more specific IT projects? What do you see as the pros and cons of a portfolio management approach as described in the article?

Please practice The RetailWire Golden Rule when submitting your comments.
Braintrust
"IT investment is like building a highway. You know you have to get from here to there, and you know it will make us better in the long run, but there is no measurable ROI."

"A corollary to this concept is that, to the extent possible, we should invest in architectures that can be grown as needed without re-building. That should be a critical requirement of an investment in infrastructure."

"The good news is that infrastructure and IT are significantly cheaper than they were even 10 years ago. ... If businesses are having difficulty justifying the costs of internal networking, custom software or Internet of Things projects, then they’re more likely than not over-estimating them."

11 Comments on "Justifying IT infrastructure investments"

A very complex topic for sure, but if we understand that an IT department has a fixed cost to maintain the current infrastructure and solutions, then all other projects need to be based on a “cost center” accounting basis. The only projects IT works on are those that are both profitable and add to the bottom line. The pro of a portfolio management approach is cost savings and the con is that some really necessary projects are never done. What is needed for the stores rarely matches what is needed for lets say transportation, etc. IT needs to be a service organization meeting the needs of the company based again on cost and bottom-line gains.

Infrastructure spend makes more and more sense the farther you move away from individual projects and silos.

So while the demands are for specific solution sets — a demand that is only likely to increase by the way — the IT strategy must be guided with an eye tho enterprise-wide solutions.

Managing a portfolio is a start toward reducing cost, reducing duplicative efforts and increasing efficiency and productivity, but the ideal would be to design from a broad IT vision down to task, not the other way around. So aggregating tasks is a step in the right direction but it isn’t the place to start.

The correct way to make these decisions is portfolio management. The problem, particularly with IT, is that the people making those decisions don’t understand the IT needs nor opportunities.

IT investment is like building a highway. You know you have to get from here to there, and you know it will make us better in the long run, but there is no measurable ROI.

Generally the article is insightful but so shortsighted on one major point. I keep harping about the damage old Newtonian mindsets are doing by treating organizations as a collection of parts. That’s what is happening here with the suggestion that infrastructure should be “it’s own portfolio.” That doesn’t go nearly far enough. If we don’t recognize the total interdependency of a system and learn to operate that way, we will revisit this issue till the end of time. IT is now going through the same myopic executive mindset that HR has been enduring for millennia. HR, traditionally, was seen as clerical function located somewhere without windows. They were supposed to be busy generating forms and filing things. Huge mistake by senior leaders and they’re doing it again. Both HR and IT are strategic resources NOT merely tactical necessities. For goodness sakes, put both functions on the most senior strategic team you have. People and technology … what could be more important? I learned this lesson years ago helping transform the sales strategy for a major… Read more »
0
|
0
-   Share

I agree that leveraging economies of scale via consolidating cross-functional business needs can help identify as well as justify investment. First, I’d almost always suggest to move your workloads to a high performance global cloud infrastructure. It’s far more agile, effective and affordable than on-premises infrastructure. A network of networks public, private and management that links together local and/or global data centers with security and efficiency is the growing norm. Building the robust virtual servers you need for your production workloads using an enterprise-grade infrastructure as a service platform will allow the retail-specific needs of literally every line of business (store ops, HR, supply chain, marketing, etc.) to optimize the performance of their organizations with a great ROI. That is a best, most direct approach to source funding for IT projects.

The best everyday analogy to this quandary is the foundation of a house. Most homes are built with a foundation that supports an addition, or an additional level added onto the original house. We can think of the foundation of the house as infrastructure onto which we can piggy back a (not-limitless) load of something. If we build the foundation on the cheap, we limit what and how much we will be able to add onto the house. Same in information systems. Another (I think) good analogy is that of the George Washington Bridge that spans the Hudson River in New York City. The bridge opened to traffic in 1931 and, because of the “factor of safety” with which it was built, it was able to support the addition of a lower level opened in 1962. Try doing that without the proper infrastructure! You would have to build a new bridge and all the roads leading to and from it next to the GWB. We emphasize the ability to be “nimble” in retail. If you… Read more »
0
|
0
-   Share

IT investment is something which should be an essential part of any business’ budget and plan. Competing in any market requires current technology (including software as well as hardware) to maintain dynamic growth and stay abreast of your competitors. Invest, perish, or cease growing….

I love that Nikki has pulled Infrastructure out as its own subject. This is long overdo. The reason so many retailers are so very far behind the 8 ball is just that. The lack of attention and/or funding for infrastructure.

This is great thinking. My only concern is that in following a portfolio management approach, retailers may delay critical first moves because they don’t have enough long-term support for the required infrastructure changes.

I say, this is a good place to start so let’s keep thinking in this direction!

The good news is that infrastructure and IT are significantly cheaper than they were even 10 years ago, and they continue to get cheaper. Programming languages have become much higher level, open-source solutions have matured and lots of consumer hardware is now sufficient for enterprise use. If businesses are having difficulty justifying the costs of internal networking, custom software or Internet of Things projects then they’re more likely than not over-estimating them.

There is no debate about the challenge to get retailers to fund infrastructure projects. Everyone realizes the need for better infrastructure, but nobody wants to pay for it. Most companies manage IT budgets based on a “hard savings” perspective and the annual planning processes is based on a goal to reduce IT and business spending by X%. This hard savings approach is short sighted and lacks the ability to consider innovative projects and investments in the future. This hard savings method to budgeting will lead to less competitive retailers and it has to stop! Retailers need to consider the “soft benefits” of investments in innovative technology that drive increased satisfaction and sales — soft benefits. Retailers that will be successful in the long-run will use soft analysis to help drive investment decisions and will invest in the infrastructure that enables innovative technology that drives a better customer experience. Whether it is the soft benefits approach or a portfolio management approach, it doesn’t matter, as long as retailers step up to the plate and invest for the… Read more »
0
|
0
-   Share

Braintrust
"IT investment is like building a highway. You know you have to get from here to there, and you know it will make us better in the long run, but there is no measurable ROI."

"A corollary to this concept is that, to the extent possible, we should invest in architectures that can be grown as needed without re-building. That should be a critical requirement of an investment in infrastructure."

"The good news is that infrastructure and IT are significantly cheaper than they were even 10 years ago. ... If businesses are having difficulty justifying the costs of internal networking, custom software or Internet of Things projects, then they’re more likely than not over-estimating them."