Joann Fabrics’ new concept is all about the experience 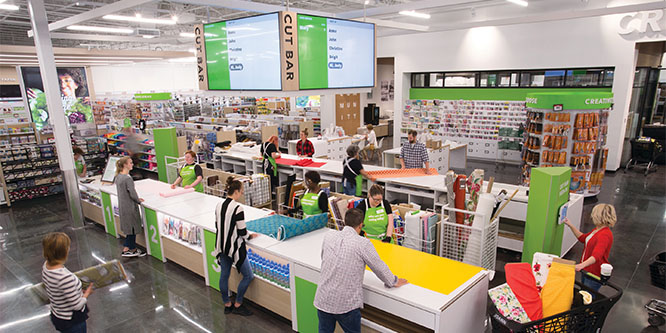 Many more traditional retailers have been pursuing revitalization through reinventing the in-store experience. Now, 70-year-old retailer Joann Fabrics is launching a new experiential store concept geared towards getting customers to hang out and collaborate.

The prototype of the new store concept will be opening near the company’s headquarters in Ohio, according to CNBC. It will feature a “Creator’s Studio” section in the middle of the store for classes and community events, an in-store coffee area, custom sewing services, rentable sewing machines and other crafting tools plus concierge services and personal shoppers to accompany customers.

The store also features some technological enhancements like touchscreens that pull up craft projects from Pinterest and a bar for fabric cutting, which will allow users to check-in via mobile and receive alerts when their fabric is ready. The company, which operates 800 stores, plans to bring the concept to other cities after perfecting it in the pilot location.

In modernizing its look, feel and assortment, Joann Fabrics may be able to build a greater appeal with the vibrant world of crafters and “makers,” many who sell their products on websites like Etsy.

Rethinking stores as places for customers to meet and work together, like the new Joann Fabrics concept, has proven to be one popular model for retailers that hope to increase both customer traffic and dwell time.

In the flagging brick-and-mortar office supplies space, for instance, Office Depot has launched a concept called BizBox in an effort to become a go-to place for entrepreneurs and SMB owners to find services, network and collaborate.

In apparel, Nordstrom opened a concept store late last year so focused on acting as a gathering spot for customers that it doesn’t even contain inventory. Nordstrom Local allows customers to meet with personal stylists, try on clothing and have products that they want to purchase delivered.

Even bathroom fixtures have gone experiential. Last year, kitchen and bath brand Kohler opened a location called its Experience Center in Manhattan. At the store, customers can try out kitchen and bath fixtures and even test out next-gen shower technology in a “private bathing space.”

DISCUSSION QUESTIONS: Will the enhancements in in Joann Fabrics’ new concept store help to reinvigorate its brand? Do you think the experiential offerings will appeal to the chain’s target demographic while attracting new customers at the same time?

Please practice The RetailWire Golden Rule when submitting your comments.
Braintrust
"While the company has a rich heritage, it needs to connect with younger crafters and deepen its relationships with its traditional customers."

"This is the future of retail. It’s collaborative, it’s visual and it provides an experience well beyond product. "

"There’s markets where playing it safe isn’t going to cut it, and arts and crafts is one of them."

Sounds pretty darned terrific to me. I’m trying to craft my own definition of “experiential retailing.” I think I have settled on EXPLORE + EXPERIMENT = EXPERIENCE. And you could add INTERACT, LEARN and TOUCH, FEEL, HEAR, TASTE. Are the senses, and therefore emotions, involved? But I like the simplicity of EX + EX = EX. Sounds like Joann Fabrics is doing something that perfectly fulfills their brand promise.

There are a lot of consumers who enjoy this brand and its offerings as a hobby, a business or a craft. Adding more education enhancements and collaboration will probably bring in new customers who wanted to try but were not engaged.

I also think this is a category ripe for community engagement and collaboration. Great job thinking about the customer.

I like the new store concept and I can see it being successful. However with 800 stores, many that are old and outdated, it is going to be quite an expense should Joann Fabrics attempt to roll this concept out to all stores. Moreover, as good as the new idea is, its success will rely on how well their store associates engage with the customer. Customer engagement has been a considerable challenge for Joann Fabrics as so much of the social media complaints talk about the poor store service, including long lines at the register and much confusion about their coupons. It’s smart to think of new concepts, but I believe Joann Fabrics would be best served to address the issues of their existing 800 stores while gradually bringing them into the new world of technology.

This is the future of retail. It’s collaborative, it’s visual and it provides an experience well beyond product. The Store Operations Council meeting, coming up in September, will feature presentations from retailers who will describe news ways of interacting with customers and creating compelling experiences in the store. So exciting.

Very smart. Joann Fabrics noticed that 25 percent of their online orders were for custom birthday shirts, and are using that data in their stores. I look forward to seeing how this impacts their sales.

I think the fact that Etsy exists sort of tells us the market for do-it-yourself fabric and crafts is shrinking. I would say it’s aging out, honestly.

So I don’t think this will be successful in a big way, but more because the market isn’t clearly identified.

This is a smart move for Joann. While the company has a rich heritage, it needs to ensure that it connects with younger crafters and deepens its relationships with its traditional customers. Creating a more engaging, experiential store environment is one way of achieving this.

The issue is that there are a lot of older stores that will need extensive refurbishment to get them up to this standard, so rolling this out will not come cheap. Returns may also be weak as the market is very competitive with other physical crafting retailers trying to drive sales, including the ever-expanding Hobby Lobby.

All the talk of experiential really still comes down to traffic and conversion. Will the Joann Fabrics’ store move the needle on these business outcomes? Yes, without doubt. An ROI period of less than six months can be expected on each element in the pilot store, which when refined and optimized will improve performance further.

I think this looks fantastic! Retailers need to innovate to add value to their customers’ lives. There is a whole community of “makers” and DIYers that are inspired by Pinterest, Etsy, The Grommet, etc. As someone who has personally had a few “Pinterest fails,” it would be awesome to have a place to go to not only get supplies, but get inspired by like-minded people. This should help differentiate Joann Fabrics from other crafts stores where you can simply get supplies. The key for Joann will be the execution. Having the right employees will make or break this experience.

Full disclosure — I was part of the BizBox team at Office Depot.

There’s markets where playing it safe isn’t going to cut it, and arts and crafts is one of them.

Looking at the converse strategy, Michael’s shares dropped ~14 percent following their 2018 Q1 earnings call. The messaging from CEO, Chuck Rubin was pretty typical — mobile, BOPIS, CRM — sales down due to timing of holidays (“weather” has also been popular in recent earnings calls from other large retailers).

With the commoditized nature of the merchandise, physical retailers in the space will need to be doing things that are truly different to succeed against (often cheaper, more convenient) online competitors.

In my opinion, Joann Fabrics is definitely taking a step in the right direction and should be focused on tuning this prototype and scaling it quickly.

My partner Rich and I were part of the craft and creative industries before we started our company, and have been active here ever since. I was on the design team for the prototype layout that most craft stores still use today. Over the years that layout has been tweaked by one company or another, but it really is much the same as it was in the ’80s. Just gondolas and power aisles. There are wonderful makers spaces out there, retailer attempts at creating communal spaces and success stories like Pinspiration, and the indie-owned Ben Franklin Crafts & Frames in Redmond, Washington. And there have been a lot of hyped-up false starts. Crafting is all about creativity. You can find the components you need in any big box craft store, but you’d be hard pressed to find a creativity center — and sometimes even creativity. Indies in this industry do a much better job encouraging crafters to stick and stay in their stores. The “Creator’s Studio” in the center of JoAnn’s sales floor is exciting,… Read more »
14
|
0
-   Share

Of all the experiential approaches mentioned, Joann Fabrics’ is one where a type of shift in the store to draw people makes sense. That said, let’s not over-hype this. Home Depot, Lowe’s, Menards, and other hardware dealers have explored things like this for years. Their learning? They are nice additions to the store — but not magic bullets.

Joann Fabrics will do well to offer some classes and a place to learn skills (which are now becoming scarce in society but are a fundamental human need). They will also do well to keep their eye on the ball: Look for the smart things that increase profitability not just the things that get headlines. There is a difference.

The root issue of the question is “reinvigorate the brand.” While enhancements to a concept store will provide insights and marginal business success, I question whether Joann Fabrics as a physical store has relevancy with today’s shopper. If they create a meeting point and a destination experience for the sewing community then they’ve only solved a fraction of their challenge. The bigger challenge is revenue. Will their store experience generate more revenue? Will new people begin to sew and craft and will the new store environment facilitate that transformation? I have my doubts.

I would love to see this first hand, seems like a hybrid between the Apple Store and The Home Depot DIY workshops. Only thing missing is a Pintrest board.

As shoppers continue to search for retailers that educate them regarding their hobby, this could be a big win for Joann Fabrics.

Joann Fabrics faces a stark choice: either stand by while their core customer base ages out of the population or courageously reinvent their store concept to appeal to the next generation. Recreating its stores as studios/gathering places for like-minded hobbyists is high-stakes, but there’s no doubt I would do the same. I’d even counsel re-vamping the brand to something like “The Sewing Room” to signify the stores as havens for makers.

To put the the “maker” culture in perspective, consider the upcoming NBC television series, “Making It” that is slated to launch July 31. It’s conceived as a competition show that pits talented crafters on creative projects. Think “Chopped” but with glue guns instead of kitchen knives.

Do you remember 2012’s show Craft Wars? It ran for a season with Tori Spelling. Same kind of concept. I’m looking forward to “Making It.”

Great step indeed towards the experiential retail. The challenge would be to scale this up to 800 stores and maintain that experience over time. It would be interesting to see how much of that additional cost affects the store’s balance sheet.

Braintrust
"While the company has a rich heritage, it needs to connect with younger crafters and deepen its relationships with its traditional customers."

"This is the future of retail. It’s collaborative, it’s visual and it provides an experience well beyond product. "

"There’s markets where playing it safe isn’t going to cut it, and arts and crafts is one of them."