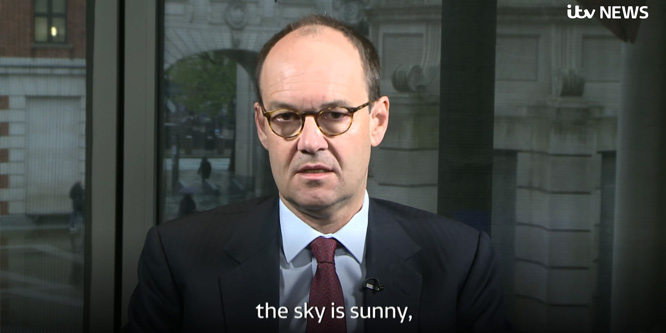 Mike Coupe, the CEO of J Sainsbury, had plenty of reasons to feel good after the announcement earlier this week that his company and Walmart’s Asda division had agreed on a merger that would make the combined business the largest grocery store operator in the U.K.

While waiting to do an interview on the set of ITV News, Mr. Coupe expressed his glee in song. His rendition of “We’re in the Money” was caught on video and distributed on social media along with subtitles, for those not familiar with the lyrics. The result was swift — public derision as Mr. Coupe was depicted as another insensitive executive set to benefit financially while many workers will likely to lose their jobs as the merged company goes in search of efficiencies.

In the 40-second ITV News video on YouTube, Mr. Coupe sings, “We’re in the money, the sky is sunny. Let’s send it, lend it, spend it, rolling along.”

“What on earth will Asda workers who are worrying about their futures think when they see this,” asked Tim Roache, general secretary of the GMB union, which represents retail workers in the UK. “It’s not only crass, it’s completely, utterly unprofessional and insensitive.”

Sainsbury’s CEO apologized for the optics surrounding the video.

“This was an unguarded moment trying to compose myself before a TV interview. It was an unfortunate choice of song, from the musical ‘42nd Street’ which I saw last year, and I apologize if I have offended anyone,” said Mr. Coupe.

DISCUSSION QUESTIONS: What do you make of Mike Coupe’s singing on the set of ITV News and the apology he offered following the distribution online? Will the video have an effect on Mr. Coupe’s ability to lead the combined companies should the merger of Sainsbury’s and Asda be approved?

Please practice The RetailWire Golden Rule when submitting your comments.
Braintrust
"It’s unfortunate but it’s a storm in a teacup. I can’t see it doing much long-term harm … though the words may yet come back to haunt Mike Coupe!"

"When we asked for transparency from the C-suite, this wasn’t what I had in mind!"

"First, he should have realized that if there’s a camera in front of you, assume ANYTHING and EVERYTHING will be taped."

His choice of song was in very poor taste and shows clearly where his mindset is. Unfortunately, many CEOs are not leaders any longer.

I found his apology to be insincere and I do think it will be difficult to get the respect of the people who make the company work every day. Without respect, he cannot lead effectively.

Oh boy. How unfortunate. This reminds me of White House economic advisor Gary Cohn’s comment that, with a $1,000 savings on taxes, families could purchase a new car. So out of touch.

I hope that Mr. Coupe’s apology was sincere.

Much ado about nothing.

Seriously. He’s clearly prepping himself for the interview. This is not news.

This video is a sad moment for J Sainsbury. No, the CEO didn’t intend for it to be videotaped and posted however his choice of the song no doubt negatively affected many people. Today we are living in a world led by greed. Greed was always active, but today it is more than ever. It is no longer, “let’s make money” but has become “we need to make as much money as we can, and as quickly as we can, no matter what or who we have to sacrifice.” Many people are feeling it, especially those that lose their jobs for someone else’s gain. So I appreciate his apology but it’s the mindset that has to change and hopefully as the younger generation continues to see how today’s greed has caused so much damage, they will implement a new policy which will be a little less about them and more about everyone once they take the reins.

When we asked for transparency from the C-suite, this wasn’t what I had in mind! Sure, everybody has unguarded moments…but this choice of song, in this setting and context… Just, wow!

As silly as it was for Mike Coupe to do this in front of a camera, it is highly unprofessional and unethical of ITV to release footage which was neither intended nor recorded for broadcast.

The choice of song is also ironic as, arguably, it is Walmart that’s “in the money”. Sainsbury’s actually has a great deal of work to do to make this deal work and to generate money. Whether they can, remains to be seen.

As for the long-term effects, it’s unfortunate but it’s a storm in a proverbial teacup. I can’t see it doing much long-term harm … though the words may yet come back to haunt Mike Coupe!

All of your points are good ones Neil, though I suspect that Mike Coupe’s interests may be even better served as he has declared so clearly his loyalty to shareholders.

Ha! Well, at least he didn’t opt for that other 42nd Street number, Boulevard of Broken Dreams!

Nothing to see. Move along. Geez.

The tongue can no man tame; it is unruly evil, full of deadly poison declares James 3:8 in the Bible. Disciplining the tongue is surely the top priority for leaders whose hearts are so easily revealed by this mighty organ.

It’s an unforced error. Fairly innocent, I think, but it sends the wrong message to customers and employees. He should have realized he is in front of a camera, in an era of social media hype.

So a union leader is criticizing management … imagine! This non-controversy will matter to exactly seven people in all the universe, and for three days.

First, he should have realized that if there’s a camera in front of you, assume ANYTHING and EVERYTHING will be taped. Especially in this day and age of instant social media fame and fury! That said, I believe while this is an innocent error, in poor taste, on his part, it won’t have any lasting damage. However, it does give a glimpse into where his mindset is with the Walmart transaction and it’s curious since it’s more appropriate for Walmart execs to be singing this song than for Sainsbury’s!

Having been in the UK this week hearing news report after news report on this deal with Walmart, it really sends the wrong message to the public. UK consumers want to know that their interests are being watched after, and this does nothing to make them feel better about what is happening to their grocery brands.

Clearly an unfortunate and telling show of typical c-suite hubris and lack of awareness. However, it will likely have zero impact on him or his ability to lead. If this is exposing his authentic self, I am fairly certain that his team already knows this.

Braintrust
"It’s unfortunate but it’s a storm in a teacup. I can’t see it doing much long-term harm … though the words may yet come back to haunt Mike Coupe!"

"When we asked for transparency from the C-suite, this wasn’t what I had in mind!"

"First, he should have realized that if there’s a camera in front of you, assume ANYTHING and EVERYTHING will be taped."