Is Walmart’s Alphabot what the future of e-grocery fulfillment will look like? 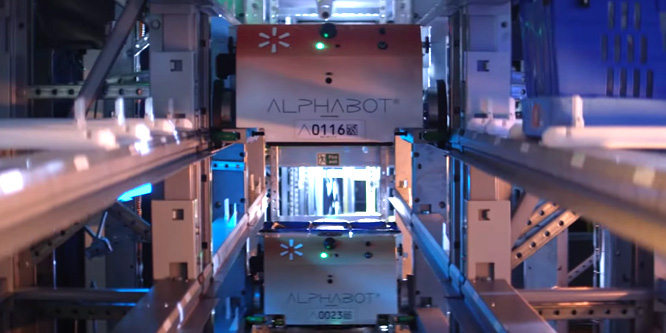 When customers place an order online, Alphabot retrieves uses autonomous carts to retrieve products. Robots assemble orders and then send them to a human associate to check order accuracy, bag them and complete their delivery. Alphabot will manage all shelf-stable, refrigerated and frozen products, but fresh products will continue to be picked by Walmart associates.

The Alphabot test has been in place since the middle of last year and Walmart plans to improve the service with an eye towards a broader rollout. Walmart does not foresee the warehouse becoming a feature in every store but possibly having one mini-warehouse supporting customers in the service area of multiple Walmart locations. The retailer has two new Alphabot-enabled warehouses planned, both of which will be smaller than the Salem test location.

Walmart is not the only major grocer in the U.S. with plans to use robotic warehouses as a way to speed up picking and packing to better manage e-grocery.

Last year, Kroger announced plans to build 20 robotic warehouses for this purpose. Its facilities are operated by Ocado, which made a name for itself in the U.K. as a standalone e-grocer with no physical presence outside of its automated fulfillment warehouses. Ocado then launched a partnership with U.K. grocer Morrisons and, later, with Sobeys in Canada before beginning to work with Kroger stateside.

One major difference between Ocado fulfillment centers and Walmart’s Alphabot solution is the size. Ocado’s warehouses tend to span hundreds of thousands of feet. The one that Kroger announced will open in Pleasant Prairie, Wisconsin, its sixth planned Ocado facility, will be 350,000 square feet, according to Supermarket News. The facility will prospectively be open within 24 months.

Startups have also gotten in on the act with a few vendors last year announcing turnkey automated micro-warehouse solutions.

DISCUSSION QUESTIONS: Is Walmart’s plan to expand its pilot of the Alphabot an indication of how important automation will be to other e-commerce grocers? What might be the downside of robotic mini-warehouse technology, and how can grocers justify the investment?

Please practice The RetailWire Golden Rule when submitting your comments.
Braintrust
"This overcomes (over time) the giving away of margin to payroll on low margin goods and allows for some give-away on higher margin fresh produce."

"There is little doubt the Kroger/Ocado approach with centralized warehousing will be more efficient than Walmart’s mini-warehouses."

"...take care not to be wowed by technology while ignoring the key question: Is e-commerce grocery really the huge opportunity it’s being hyped as?"

10 Comments on "Is Walmart’s Alphabot what the future of e-grocery fulfillment will look like?"

In my view, micro-fulfillment, and automation within individual supermarkets is going to play a bigger role in grocery e-commerce. The big-scale automated warehouses – of the kind Ocado has pioneered – will have a role to play. However, their disadvantage is they can only profitably serve a limited catchment which within many parts of the U.S. is limited by low population densities. By contrast, the local fulfillment model can serve a much wider spread of the country and boosts the productivity of existing stores.

You only have to look at Amazon, UPS and FedEx to know automated warehouses and fulfillment are the future for moving high volume packages. There is little doubt the Kroger/Ocado approach with centralized warehousing will be more efficient than Walmart’s mini-warehouses. The interesting question is whether they will be sufficiently effective and flexible to meet consumer expectations at the final point of delivery.

I do think this is the future of grocery home delivery. It overcomes (over time) the giving away of margin to payroll on low margin goods and allows for some give-away on higher margin fresh produce.

I also think it’s not entirely new. I believe frozen food warehouses have been fully automated for some time. What IS new is the notion of picking individual orders.

I’m with you on this Paula. Now, if they can just figure out how to pick fresh produce. For my 2 cents.

The U.S. e-commerce market is really a set of markets that are highly diverse in terms of population density and traffic flows, with widely varied consumer profiles in each. Thus there is not a one-size-fits-all grocery delivery solution in the U.S. The Ocado model will be right in some markets, microfulfillment solutions will be right in others. And others will be able to get away with old-fashioned employee picking. And of course, this will evolve over time as online grocery penetration grows in the U.S. from today’s levels, which are low by global standards.

This is a long time in coming. Picking in the store is inefficient and costly.

And in the Whole Foods I visit, not only do you share the aisles with the other shoppers, you share them with the employees with shopping carts picking for home deliveries. Could the system be any worse?

I agree with you Gene, I was in Whole Foods recently and experienced the same thing.

Automating warehouses is the present, not the future. The supermarket industry is just running to catch up. The downsides are associated with volume — not enough and it’s hard to justify the investment; and publicity — too much about how workers are being “replaced” by machines isn’t the kind of press any retailer wants.

I don’t think robotic technology is a strategic advantage for any grocer – it’s part of the jacks or better to enter the game. So it’s hard for me to get excited about this company’s robot or that one’s automated system.

As technology, they may be fantastic — an effective robot is not an easy thing to build. But we need to take care not to be wowed by technology while ignoring the key question: Is e-commerce grocery really the huge opportunity it’s being hyped as? I’m quite skeptical.

One of the biggest problems with automated warehouses is the lack of flexibility they offer the retailer. While they can be scoped for optimum performance, they are often difficult to scale up or down as demand varies beyond certain parameters. It becomes very difficult to work around them to increase volume. However, they do have the advantage of being able to work round the clock if necessary.

Robots are undoubtedly coming and they will have a place, particularly in supply chain operations like warehouse picking. The replacement of large numbers of jobs is another matter but will inevitably become an issue if in the future robots take a significant share of the operation in retail.

Braintrust
"This overcomes (over time) the giving away of margin to payroll on low margin goods and allows for some give-away on higher margin fresh produce."

"There is little doubt the Kroger/Ocado approach with centralized warehousing will be more efficient than Walmart’s mini-warehouses."

"...take care not to be wowed by technology while ignoring the key question: Is e-commerce grocery really the huge opportunity it’s being hyped as?"