Is Trump declaring war on counterfeits or Amazon and other e-marketplaces? 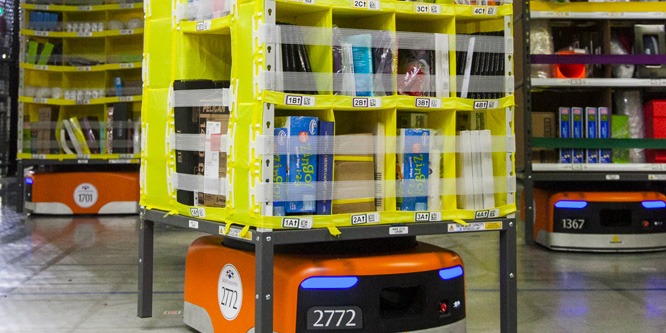 The Trump administration is looking to exert pressure on e-commerce platforms and warehouses to reduce the number of counterfeits sold to American consumers.

The Department of Homeland Security is expected to formally announce today “immediate actions” to pursue fines and other penalties “against third-party marketplaces and other intermediaries dealing in counterfeit merchandise,” according to reports.

The U.S. government, which has little recourse against foreign exporters of counterfeit goods, appears to be focusing its attention on more accessible domestic sites.

Peter Navarro, director of trade and manufacturing in the Trump administration and a chief proponent of its tariff policy against China and other nations, said the new initiative is intended to make all e-marketplace operators do the right thing.

“We don’t love regulations in this administration, but what we do love is corporations accepting their appropriate responsibility. Right now, it’s skewed,” Mr. Navarro told CNBC after the signing of the Phase One trade deal with China last week. “If you’re an intellectual property rights holder, whether you’re Michael Kors or Louis Vuitton or Pfizer selling prescription drugs, the onus is really on your company to police the internet, where a lot of this counterfeiting occurs. That’s not right.”

In an interview with The Wall Street Journal, Mr. Varro said, “This is not about any one e-commerce platform  — this is about e-commerce playing by a different set of rules that simultaneously hammer brick-and-mortar retailers, defraud consumers, punish workers and rip off intellectual-property rights holders. It’s Amazon, Shopify, Alibaba, eBay, JD.com, Walmart.com and a constellation of lesser players that provide the digital hubs.”

DISCUSSION QUESTIONS: Who bears the greatest responsibility for counterfeits entering the U.S. — the government, manufacturers, retailers or marketplaces? Will fining and pursuing other penalties against e-commerce marketplaces be effective in cutting the sale of counterfeit goods?

Please practice The RetailWire Golden Rule when submitting your comments.
Braintrust
"In the end, the consumer is going to hold the retailer ultimately responsible for what they sell. "

"Amazon and other marketplaces should be cracking down on these sellers and removing them and their items from their platform."

"It’s not just a brand issue, it’s a safety issue. I’m grateful that measures are finally being put in place to protect American consumers."

16 Comments on "Is Trump declaring war on counterfeits or Amazon and other e-marketplaces?"

The question is interesting as posed — but from the standpoint of the retailer it may also be irrelevant. In the end, the consumer is going to hold the retailer ultimately responsible for what they sell. Whether platforms like Amazon will catch that fury, or it will be aimed directly and exclusively to the seller, is an interesting nuance though.

I believe it is the government’s responsibility to verify the provenance of a product that enters the U.S. If it says it’s Gucci then this needs to be proven upon entry. Marketplaces and retailers also have a responsibility, we can’t act as essentially fences for counterfeit goods.

Each player in the game must take ownership to protect the consumer, including said consumer. If it sounds too good to be true then it is!

I must disagree Ken. The government trying to check if a Gucci is real is well beyond their expertise. The product coming into the country was ordered by someone. Either that someone knew it was counterfeit or was terribly naïve. Prosecution of the buyer is what will stop this. Not the government trying catch as catch can.

Look, I’m no fan of the current administration, but expecting uneducated consumers to have the brand knowledge to protect themselves against inauthentic purchases in an open marketplace is risky—especially when it comes to cosmetics. The manufacturing process and ingredients of many of these fakes make them dangerous. We need more regulations in place to protect consumers against potentially poisonous products.

This question does not have a simple answer. All these entities share some responsibility. Manufacturers know that what they are manufacturing is a knock-off and will be liable for counterfeiting. Retailers certainly know what it is that they purchase from suppliers and it is the retailers’ responsibility to inspect the products they bought for legitimacy. Marketplaces are caught in the middle because they do not often see or test the products. Marketplaces can, however, levy sanctions on, or even remove unethical sellers from their marketplace. Finally, the government is probably the least responsible until such time as a breach has been reported to them. At that point, they could enter the picture and prosecute the offenders.

Hmmmmm … motives? Why do we need the government’s help with counterfeits before, or more than, help with clean air, clean water, health care costs, prescription drug costs?

The idea that retailers don’t know they are buying counterfeit merchandise is bizarre. Do they not vet their suppliers? Do they not recognize the product? Do they not suspect something is amiss due to a low price?

If they don’t know it is because they are purposely looking the other way. Let’s just hope the government goes after the true retailers and not the little guy with a street cart on the corner who is selling counterfeit products and everyone who buys them knows.

It seems to make sense on the face of it. But this is unnecessary, introduces additional bureaucracy, and may prove to be a barrier to smaller marketplaces.

The FDA already bars importing the class of products that it governs, counterfeits or not. For the rest, the typical retail consumer goods, the market forces will work — Nike and IKEA walking away from Amazon is an example, and consumers having recourse with the retailer is already there.

Somehow I think “the government” has better things to do.

Retailers should be applying the old rule – if sounds too good to be true, it probably is. The starting point for this verification process is the cost being offered.

The problem with this approach is that the retailer must want to know the goods are counterfeit. In the marketplace world where the site may be used by dishonest retailers, who is to blame? The short answer is: all parties involved.

You know the old saying “even a broken clock is right twice a day?” While this legislation was probably put in place to further reduce imports, the fact remains that unsafe, often contaminated counterfeits are being sold on Amazon alongside authentic merchandise. It’s not just a brand issue, it’s a safety issue. I’m grateful that measures are finally being put in place to protect American consumers.

Counterfeits being sold on marketplaces like Amazon have been all over the news lately. It is a growing problem, partly due to the influx of third-party sellers (many of them from outside the U.S.) looking to make a quick buck by selling what looks like name brand items at low prices. Amazon and other marketplaces should be cracking down on these sellers and removing them and their items from their platform. If they are not getting the job done, having the government step in to put pressure on them to do so is a natural next step.

This has got to be a joint effort across all stakeholders, government, distributors, CPGs, retailers, etc. With the volume of bootleg goods crossing into literally the trillions of dollars with copyright infringement, etc., one entity alone cannot stop it all.

A retailer is responsible for what they sell, there’s no doubt about that. With third party sellers though, the complication is in deciding who “the retailer” is, the platform — Amazon, eBay, etc. — or the party that actually ships the goods. I don’t think you’re ever going to ever get a complete solution to this. Certainly the platform can, and should, set certain standards and practices that the vendors must follow, but it still has to be up to the latter to follow them.

As for this enforcement effort, specifically, we have an administration whose performance is suspect at best. Let’s not go into “at worst” — that frequently launches diatribes against the leading third-party platform … gee, what could co wrong?

This is a proper use of regulations to stop a market shortcoming. Counterfeit goods are 3.3% of world trade and rising, according to the OECD. A report several years ago by Euromonitor estimated 8% of China’s economy was at that time driven by counterfeit goods.

Online marketplaces profit tremendously from counterfeits sold by third party sellers, because most buyers buy them willingly. The frequency of adverse outcomes such as injury or sickness are tragic, but too rare to influence marketplaces to police more rigorously.

So unless regulations AND enforcement intervene, the manufacturers bear the costs as they compete with cheaper knockoffs of themselves in the same retail channels.

I agree with Ralph, not a simple answer. However it should be a joint effort. Counterfeits are so good that as a consumer its hard to detect. How can a consumer hold a retailer accountable when they do not recognize a counterfeit?

Braintrust
"In the end, the consumer is going to hold the retailer ultimately responsible for what they sell. "

"Amazon and other marketplaces should be cracking down on these sellers and removing them and their items from their platform."

"It’s not just a brand issue, it’s a safety issue. I’m grateful that measures are finally being put in place to protect American consumers."