Is there a ‘right way’ for retailers to help in times of disaster? 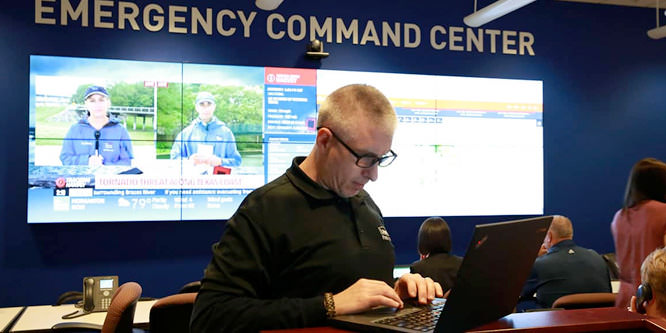 In the wake of the unprecedented destruction caused by Hurricane Harvey, retailers and brands, both local and nationwide, have jumped in to aid in the recovery.

In trying to take action in the face of disasters and tragic events, retailers and brands can find themselves walking a difficult line. On one hand, it’s important for businesses to take authentically charitable steps in such instances. High-profile charitable acts can also encourage other brands to step in and donate or act.

However, the fact that businesses are motivated by profit can make such efforts appear like cynical branding exercises if not handled properly.

Companies are taking different steps to help victims of the latest tragedy:

Some others reaching out as reported in AdWeek are:

DISCUSSION QUESTIONS: What is the appropriate reaction from retailers or brands for national disasters on the scale of something like Hurricane Harvey? Where should retailers and brands draw the line in providing aid without giving the appearance of profiting from the disaster?

"Sometimes it is not about the money, it is providing a platform leveraging a large retailer’s resources and network...beyond the scope of government."

"No doubt that the charitable arm of a company is about community and connection. We help because we care."

19 Comments on "Is there a ‘right way’ for retailers to help in times of disaster?"

It’s a thin line between charity and marketing. I think the examples of breweries shipping out potable water clearly falls on the side of charity since water isn’t their core product. Donating money or matching funds is also a fairly “high road” approach to charity.

The fact is that the people of Houston have two kinds of needs — immediate needs like water, food, clothing and temporary shelter and longer-term needs associated with recovery.

It’s easy for companies to be “one of many” addressing immediate needs, but more difficult when it comes to the long, hard path to recovery and reconstruction. One way to avoid the trap of being seen as exploitative is to form alliances with other companies offering co-branded, or non-branded, solutions.

Right now though I doubt if Houstonians are too worried about why help is coming and are just grateful that it is.

I think it is imperative for companies to pitch in when there are disasters like Harvey. It can be damaging to them when they are a company with a huge presence and choose not to. However the company must do it for the right reason, and that is to help those in need and not for photo ops and press releases letting everyone know how great they are. If done discreetly with success the company will generate plenty of positive press from those who are impressed and pleased with the efforts the company has made.

Quickly, quietly and generously. Social media will reward those who deliver in the months to come. $1 million dollars from folks like Home Depot and Lowe’s is nothing. Come on folks, step up! Both of you stand to gain hundreds of millions (even billions!) in the rebuilding of southeast Texas and Louisiana in the months and years to come.

The devastation is on such a scale that these donations, nice as they are, are a drop in the bucket. The latest estimate of damage I’ve heard is $30 billion, with a “b.” So, it’s great for retailers and brands to pitch in, but it is going to take a lot more than what is listed above, and local, federal, and state governments are going to have to come up with much of the money for recovery. The term “authentically charitable” is troubling because it implies that charity is often or sometimes not authentic. It rubs me the same way as the term “fake news.” Either it’s news or it’s charity, or it’s not. It also seems that brands and retailers should sometimes try doing things without issuing press releases to pat themselves on the back. If it is really about charity, just do it without the fanfare and PR department. (Like the mattress store owner who opened his store to all displaced residents, without any PR). I saw a Ford press release announcing a… Read more »
3
|
0
-   Share

All the comments have listed the appropriate ways in which companies can react. The worst way is to turn what they are doing into part of a publicity campaign or, even worse, some sort of ad. I have to believe that no major company would be so foolish.

Ryan is absolutely correct. What we are seeing is companies helping with the immediate needs. The question is, will they still be around to assist with the longer-term needs of recovery when the news cycle has moved on?

Disaster victims and their families need goods and information. Most companies take immediate advantage of on-site presence. Insurance companies for example, which tend to be some of the first on site, seek to make fast settlements. But they are missing the opportunity to provide information. Several years ago it was contemplated that large pop-up LED signs could provide visual information at central sites in order to provide information and instruction. These can be as valuable as blankets, food and water.

Lyle – side note on insurance companies. We had a tornado come down our street in January, seriously damaging about 15 homes, and totaling a few of them. Here we are 8 months later and 5 of these homes are still in limbo, with tarps on their roofs, etc. At least in south Florida, it is an arduous process dealing with some insurance companies, so some of these homeowners have to go through hurricane season without proper roofs.

The right way is to do things that genuinely assist those in need. If a retailer does that and helps to make a difference, it’s good. There’s no need to over analyze this!

As our society has become overly sensitive and judgmental, I feel for any organization that the public feels “should” contribute to disasters, as these organizations cannot react quickly enough nor can they donate enough to keep everyone happy. I applaud those that have donated and I recommend to just lay low, don’t brag about it, just do what you can to help.

Retailers are human and humane people concerned about the environment, society and people in need. Yes profits are important. And there are times when the acts of the companies above make so much sense — to connect us all as people. Frankly, this is in the profit interest of the retailer too. These acts of helping people in need engender a positive brand appeal and brand loyalty. Retailers do need to set their limits, but in a time of such dire consequences, hardship and need these acts are important and go a long way. Helping consumers in their times of need is not only the right thing to do, those consumers will pay back the brand — royally — in the years to come. The memory of the generous acts go a long way. Please keep it up, fellow retailers!

No doubt that the charitable arm of a company is about community and connection. We help because we care. We also know the more we give, the more we get. The law of reciprocity is in play. No doubt some customers will do business with a company because of their community involvement and their charitable contributions. There is nothing wrong with any of this. I truly believe the companies mentioned in the article are giving with no strings attached. And that is the best strategy. Give and/or help with no expectation other than the knowledge you are giving and helping.

When talking about large organizations generating billions of dollars in revenues and profits, it only makes sense that they do something to contribute to relief efforts both in the short term and long term. The issue is whether or not they actively try to publicize it through PR and media or just let the world see them doing it and let the word spread organically via social media. What matters is helping the people who desperately need it in the wake of the storm. In the end, it’s a matter of doing the right thing. Retailers and brands shouldn’t act any differently than other large companies when it comes to large relief efforts.

I agree with the policy of “quickly, quietly and generously.” However, I think that the speed and generosity of retailers and food brands in this disaster have generally been under-reported by the mainstream media.

Obviously I’m not going to criticize any business’s efforts to help, but as noted, there’s often a thin line between “helpful” and “promotional.” Companies in the affected area(s), or companies anywhere who are in a position to offer specific assistance — like building supplies, transportation, heavy equipment, etc. — are IMHO the logical choices to be coming forward.

More generalized offers of donation matching I find somewhat problematical: sure it’s great to come forward in a massive disaster, but what about all the other times the Red Cross (or whomever) needs assistance? Aren’t everyday victims equally deserving of support, yet how can a business offer that without becoming a charity itself?

It is heartbreaking to watch the devastation and human tragedy in Texas and now today in Louisiana. In the months/years to come, rampant homelessness, loss of income, children without schools. Companies like Amazon and Walmart could take a long term leadership role in setting up programs leveraging their resources to help the victims of Harvey go through the long and arduous task of rebuilding their lives. Sometimes it is not about the money, it is providing a platform to bring people together leveraging a large retailer’s resources and network — networks of people and support beyond the scope of state, local and federal governments.

Authenticity is the key to responses to natural disasters as it is for everything else. Retailers should address the needs of their employees and their customers and then expand out to the wider community. If the retailer can do so consistently with their core positioning (e.g. The Home Depot and building supplies), so much the better. If not, then merely providing safe spaces, food and living supplies, is the key.

I’ve seen a variety of retailers and brands pitching in — but my favorite story has been “Mattress Mack” turning the Houston area Gallery Furniture stores into shelters and housing and feeding 400 evacuees. It’s authentic and inspiring to people even out of the area.

Do it for the people you are helping, not for the media coverage. The media will come given the coverage by social media, but do it quickly and focus on the speed and scale of delivery to deliver the maximum good. Don’t just pose for the media.

There is certainly a WRONG way to respond…

"Sometimes it is not about the money, it is providing a platform leveraging a large retailer’s resources and network...beyond the scope of government."

"No doubt that the charitable arm of a company is about community and connection. We help because we care."