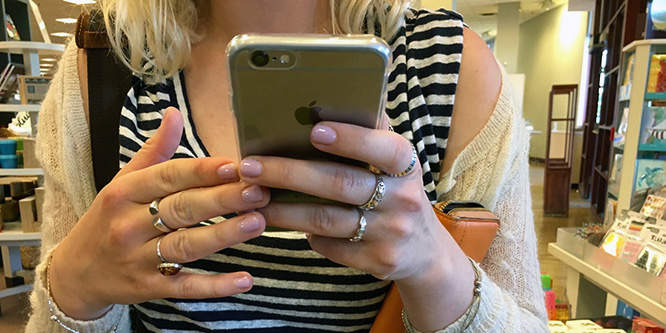 A survey from retail consultancy Luxury Institute finds 83 percent of U.S. consumers between the ages of 18 to 49 willing to license their social and digital platform data (i.e., Google, Facebook, Instagram) for rewards and benefits of value to them.

The findings appear to run counter to other studies that show great apprehension by consumers over the use of their social data. For instance, KPMG’s “Corporate Data Responsibility: Bridging the Trust Chasm,” study released earlier this year found 86 percent of consumers saying data privacy is a growing concern and 64 percent saying companies are not doing enough to protect consumer data.

The contradiction between individuals’ intentions to protect their privacy and how they actually behave in the online marketplace is often referred to as the “privacy paradox.”

In a column last year in The Conversation, university scholars led by Ivano Bongiovanni of The University of Queensland cited three explanations given for the privacy paradox:

In a PwC study last year, 67 percent of consumers said that, despite “nervousness” over sharing data, the benefits outweigh the risks. Seventy-six called sharing personal information with companies a “necessary evil.”

PwC wrote, “Consumers aren’t finding businesses they can trust, but if they do so in the future, they’ll choose those companies instead.”

DISCUSSION QUESTIONS: What’s causing the privacy paradox (i.e., consumers’ inaction to protect their privacy online) and is it becoming less relevant or more so? Are consumers reaching a tipping point in their privacy trade-offs online?

Please practice The RetailWire Golden Rule when submitting your comments.
Braintrust
"As more and more data savvy consumers enter the consumer market, I suspect we will get real clarity about how, and how much, informed consumers value their privacy."

There’s a stark difference in consumers’ minds between knowingly giving over their data and their data being collected without permission. Consumers assume their information is being collected by social platforms because they have to enter it themselves in exchange for being there and because of the inherent nature of what social media is. When it comes to shopping brands, consumers are only aware of the fact that they’re knowingly offering their payment information in exchange for the goods. If retailers were more transparent about the value in data collection, shoppers would likely be more on board.

There’s still a sucker born every minute. You get no long-term benefit from giving any company your private information. It’s not the company’s job to make you smarter – people know what’s right and wrong and yet they’ll give up everything for 10 percent off their next purchase. Consumers should have reached a tipping point years ago with the first of the big data breaches. “Nobody ever went broke underestimating the intelligence of the American people.”

We cannot generalize on this issue. Some people will hold their privacy concerns near and dear to their hearts. Others will weigh the risk/reward factor and continue providing personal information for the sake of bargains, deals and the convenience of shopping or schmoozing online. A third group will charge blindly into the ether of the market and wreak havoc on their own privacy.

There is always a segment of consumers that is willing to trade privacy for money. Millions of people willingly submit themselves for surveys and opinion polls, completing forms and typically earning a few dollars each time.

The problem is not with monetizing the information from willing participants. The issues are hard-to-manage privacy settings, lack of transparency, and unethical and illegal mining of data.

The digitization of everything has delivered tangible benefits to companies and consumers alike, but privacy invasion is a real threat and consumers ought to be vigilant in protecting their personal data. Since Europe’s GDPR has been enacted about 2.5 years ago, there have been over 120,000 data breach notifications! Companies in the U.S. are not immune to this, and consumers need to be on guard. Where are we with the tipping point? Closer than we think.

The observation that consumers have a difficult time perceiving the value of their privacy is key – except it’s not merely monetary value. Companies have succeeded using the Google approach – stopping just short of being creepy.

At the same time, the daily value delivered by Facebook and Instagram is quite tangible for the consumer. With few exceptions, tangible value wins out over intangible cost every time. Hence the privacy paradox.

There is a clear friction/reward principle at play as consumers opt-in to share their personal information, with the expectation of far more personalized shopping experiences. The heightened awareness around privacy concerns has required retailers and app developers to be far more transparent around their privacy and information sharing policies.

It’s commendable to see Apple take the lead around the privacy paradox. By enabling consumers to control when and with whom they share their data, there is far more confidence in the system that our data is safer and secure. However there continue to be widespread concerns when data breaches and system hijacks occur. We should all be far more guarded and protective about who we share our information with.

People feel like protecting their privacy is important but, outside of identity theft, they’re not really sure why it’s important. So when Facebook provides ongoing entertainment and all they have to do is offer up that privacy to gain access, it’s an easy decision.

I hate to dispute the researchers, but I am not convinced there is a real “paradox” here. Sure people tell survey takers that they have reservations about sharing their data but, in my experience, the vast majority of people share anyway — especially when there is a price incentive to do so.

The so-called privacy paradox is caused by a lack of consumer understanding. Actually there is no paradox. Consumers want both rewards and privacy and don’t see why those are competing concepts. As more and more data savvy consumers enter the consumer market, I suspect we will get real clarity about how, and how much, informed consumers value their privacy.

Yup. As with any optionality these days (e.g., in-store versus online) – it’s an “and” not an “or.” Consumers want a better understanding of how data sharing will benefit them, or they are less likely to share. And the definition of “privacy” is a complicated one…

The paradox is related to what question is being asked of the consumers. Yet this is a complicated and important topic for companies because they do need to improve how they protect the data they collect, while striving to collect more of the data that helps them deliver a better customer experience. In our experience, about 70 percent of customers will share more data in exchange for greater value or better experience – yet those same customers are increasingly aware of security concerns. As awareness grows, customers will be more careful about which brands are allowed access to their data – which is precisely why brands need to up their game in protecting it. One security breach can destroy a lifetime of building trust with many customers (albeit not all).

The operative phrase is “rewards and benefits” which implies awareness of the tracking. What consumers can’t stand is stealth.

When hundreds of entities are capable of collecting personal data storing, trading, and exploiting it in the name of personalized marketing, there is a dreadful mismatch of power. Once consumers lose ownership of their personal data, they also lose the ability to negotiate over its value.

The incremental cost of providing search, an app, a digital service, or a game to one individual is very near zero. Yet we blithely sacrifice our private data to obtain these things.

Because digital businesses launched and experienced mega-growth before any legal framework was created to keep them in bounds, they have naturally tested the limits of cultural acceptance. Today they are so pervasive and entrenched that only legislation and antitrust rulemaking can erect boundaries to protect the public.

I believe strongly in the establishment of a personal data lockbox, which would empower individuals to negotiate fair compensation in exchange for limited use of their information by corporations. This is achievable within a blockchain environment, if the digital infrastructure can be assembled.

It comes down to value. Sites, retailers or other partners who use data to make relevant offers or share relevant information will be trusted partners. They will provide information that helps the shopper. That experience will work for both trusted partners and shopper. But those who blast endless offers based on the last search which was a one-off or gift item with no relevance to the shopper will be blocked. It’s about an exchange of value. If no value is being delivered – or worse, the shopper is being annoyed – data will and should be blocked. Privacy? For some. For many others it’s more an evaluation of “What’s in it for me?” Exchange of personal data for value can work and does work but it takes work, not more triggered popups and email blasts.

Most people don’t realize the extent to which many companies and public organizations use their data. Few people read the Terms & Conditions, and even then, invasive/predatory behavior can sound innocuous when coated in a fine layer of legalese. People will always want convenience — they can clearly see what they’re gaining from that. But many don’t know the trade-off or what they’re giving up when they sell their data.

Braintrust
"As more and more data savvy consumers enter the consumer market, I suspect we will get real clarity about how, and how much, informed consumers value their privacy."