Is the future of retail being cooked up in a lab? 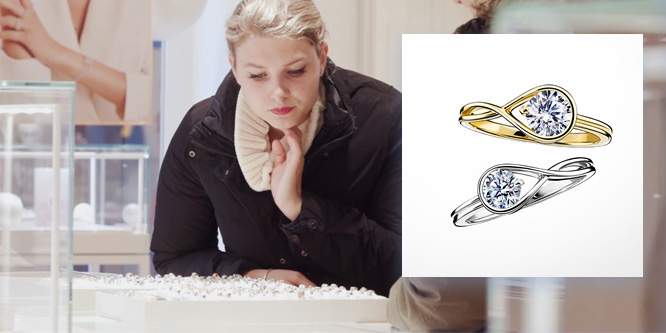 Pandora announced yesterday the launch of its first collection of diamond jewelry made exclusively with diamonds created in a lab.

The company, which is primarily known for its bracelets and sold 50 million diamonds last year, said that the new Pandora Brilliance line is its first step to phasing out the use of mined diamonds in its products. Pandora will launch the new line in the UK this summer before rolling it out globally next year.

The goal, according to the company, is to make jewelry more accessible to the public with pieces that are both affordable and sustainably produced.

Alexander Lacik, Pandora CEO, called  the new line “as much a symbol of innovation and progress as they are of enduring beauty and stand as a testament to our ongoing and ambitious sustainability agenda.”

CNBC, citing a Bain & Company as its source, reports that the price of diamonds grown in laboratories has fallen over the past two years and that they “are now up to 10 times cheaper” than those mined from the earth.

Sales of jewelry with lab-grown diamonds has grown significantly and quality is said to be equal to those of mined gems.

The products are also more environmentally friendly. Pandora says its new line has received a CarbonNeutral product certification in accordance with The CarbonNeutral Protocol.

Jewelry is not the only category that may be changed as a result of lab-grown products. A similar scenario may play out with meat products. A restaurant in Singapore became the first in the world to serve lab-grown chicken to patrons. The introduction of the chicken, made by Eat Just, a U.S. startup, marked the first time that a government anywhere in the world gave its approval for the sale of such products.

Eat Just co-founder and CEO Josh Tetrick called the sale a “historic step” that moved the world closer to the point “where the majority of meat we eat will not require tearing down a single forest, displacing a single animal’s habitat or using a single drop of antibiotics.”

CNBC, citing a Blue Horizon Corp. forecast, reports that sales of lab-grown meat is expected to grow to $140 billion by 2030.

Eat Just is not the only company pursuing lab-grown meat. Memphis Meats, a company backed by food giants Cargill and Tyson Foods, has raised nearly $350 million in funding in recent years to develop meat grown from the cells of livestock in its facilities.

DISCUSSION QUESTIONS: How likely is the emergence of lab-grown products to disrupt the consumer brand and retailing industries over the next decade? Are there broader implications for businesses and society?

Please practice The RetailWire Golden Rule when submitting your comments.
Braintrust
"It takes the question away from needing to be asked by the consumer and consequently eliminates a potential objection to the sale. "

"Ultimately the success of any of these products will hinge on accessibility and cost, with sustainability concerns an added benefit."

19 Comments on "Is the future of retail being cooked up in a lab?"

First things first: eventually we will need to stop categorizing these products as “lab-grown” products. Whether it is deserved or not, there is a negative stigma attached to lab-grown foods, and that stigma will inevitably carry over to most categories. If we can rebrand lab-grown to something far less negative, I think greater consumer adoption will follow, and then yes, I do believe retailers and brands alike will begin to adapt their assortment and range strategies to capitalize.

Lab-grown chicken? Is that actually a thing?

I think it’s currently in the works, but I’m not looking forward to it.

It is hard to tell. Diamonds are sought after because they are a precious commodity. We cannot compare them with other lab products such as meatless meat products or synthetic leather.

While the concerns around ethical sourcing and environmental impact are the same, the nature of exclusivity with diamonds make it an altogether different category.

So the success depends on how successful Pandora will be in marketing it as an as aspirational products as regular diamonds.

I love this. A real differentiation and way to focus on social and ethical perspectives. It takes the question away from needing to be asked by the consumer and consequently eliminates a potential objection to the sale. Being an early, if not first, mover in terms of using this is a huge boon – expect more of this from other retailers – we have already seen package reductions and other stances such as not buying from Brazil until rain forest destruction has been eliminated.
Retailers are realizing that consumers are seeking to buy from retailers with similar values.

We worked with a jewelry retailer last year who shared all the benefits of lab-grown diamonds vs. mined diamonds. Lab-grown is so much more ethical and you really can’t tell the difference. My mother was a jeweler so saying that is a lot coming from me.

But feeding my family lab-grown meats? Nope. Not gonna happen.

Georganne, a question: If I give my wife or significant other diamonds do you think there would be a difference over whether they would accept it if the diamonds were lab-grown or mined? Inquiring minds want to know.

I think it would depend on how much value a person puts on what is “real,” but lab-grown diamonds ARE real. From what I understand they are identical, even jewelers can’t tell. CZ and Moissanite stones are also lab-created but they are not the same as lab-grown diamonds. The color and hardness is different.

I agree with you Georganne. People wear cubic zirconias with pride, why the fuss about lab grown diamonds?

I’m not a student of the jewelry market, so lab grown diamonds prompts a “…who knew?” kind of response from me. But hey, if it’s earth- and or/human-friendly I’m all for it. I’m intrigued by lab grown meats but will confess to being in no hurry to sample them. The lab product I am anxious for is biodegradable plastic and polyester. Not just recyclable, but biodegradable. It’s great when we recycle, but for the amount of product that inevitably ends up in a landfill, we need for it to be biodegradable. From apparel to packaging, sustainability will be a bigger and bigger driver of product development going forward.

Limited if they keep the lab-grown nomenclature, not bad if they change it to something positive like Earth-friendly or responsibly resourced. That said, I think disrupting is the wrong word since these products will be released and/or accepted or rejected on an individual basis. I also think it depends a lot on the category and industry. Natural fabrics always sounds better to me than “synthetics.” Lab-grown food sounds a little Soylent Greenish around the edges. But lab-grown jewelry? Maybe that could be a thing. Rather than look at the implications on society, I suggest it might be more useful to look at how social attitudes impact market potential.

I couldn’t help by thinking of miners, ranchers and others that might find themselves looking for new lines of work if these products take off. The diamond case, I found interesting, because those made in labs are now cheaper than those excavated from mines. Can the same cost scenario play out in the production of meat? That could have major implications for consumption.

Adidas’ mushroom-based shoes and Nuud’s biodegradable gum suggest lab-grown products will shake up retail this decade. The broader implication is sustainability is no longer a nice-to-have – it’s a business essential.

Perhaps it’s not “lab grown,” but food has been cooked up in the lab for decades, probably not to the users’ benefit. What will the new chemistry be to make it happen? When considering other things (maybe even food) don’t ignore 3-D printing.

Sustainability is a growing concern among consumers. If the artificially produced products (diamonds) are of similar quality to the real thing and the price is a fraction of the cost, consumers will accept and buy these products. “Lab-grown meats” are going to be harder for consumers to accept. Many people will be concerned with the safety of alternative meat products that are not naturally produced. If lab-grown meats are proven to be safe and healthy, it could significantly reduce the environmental impact of producing meat.

It’s not just Pandora, Signet is adding more lab-grown diamonds into the assortment mix with a slew of services as they reinvent the jewelry shopping experience. I am not a fan of the term lab-grown, especially in food, but it is less problematic for apparel and accessories. There is an appeal for a product enabled by tech advances that replicate nature’s unique process and outcome in a highly sustainable way; I’ll wear it but won’t eat it.

The dramatic price drop of lab created diamonds shows that there’s no disruption here — mined diamonds retain their value. Those who leverage the new lab created versions will only succeed in doing so because they are in a unique spot. When it’s from Pandora, we don’t quite expect diamonds of true quality — we’ll find those at a jeweler. So Pandora seems likely to do well with these. But traditional jewelers? They’ll continue to make plenty of money with real diamonds.

Just like cars, the value of jewelry drops in half as soon as it walks out the door. Jewelry that retains or increases in value, like collectors’ watches, involves far more design and craftsmanship (and a lot of sustained brand development over time) than the actual cost of the jewels incorporated – the worth comes from the story. As the story of misery and violence around mined diamonds continues to degrade, jewelers will change the story for their products to celebrate the ingenuity and creativity of “crafted” stones. In a generation the thought of using newly-mined diamonds will be as abhorrent as using ivory, but more jewelry will be sold than ever.

Ultimately the success of any of these products will hinge on accessibility and cost, with sustainability concerns an added benefit. That said, for cultured meat products, it will come down to cost and making consumers understand potential benefits. Right now production costs will likely remain very high until scale helps bring them down, which means an expensive end product. That will be a natural barrier to entry for most consumers, much as it was in the early days of plant-based meat. But long term, there are potential benefits of cultured meat. Cultured fish/seafood, for example, eliminates the risk of mercury and microplastics. And seafood is generally shipped over large distances at high cost, which could be curbed significantly. Meat will never go away, but just as with plant-based alternatives, cultured meat will likely carve out a niche.

Braintrust
"It takes the question away from needing to be asked by the consumer and consequently eliminates a potential objection to the sale. "

"Ultimately the success of any of these products will hinge on accessibility and cost, with sustainability concerns an added benefit."