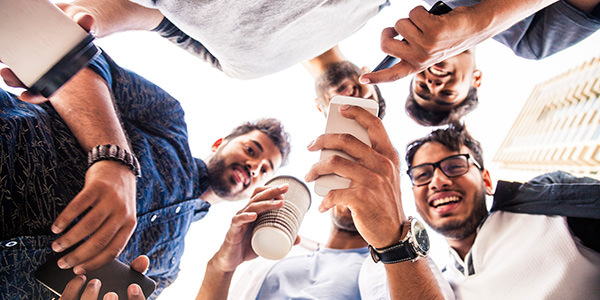 Through a special arrangement, presented here for discussion is a summary of a current article from MarketingCharts, a Watershed Publishing publication providing up-to-the-minute data and research to marketers.

Word-of-mouth (62 percent) edges TV ads (61 percent) and online ads (61 percent) as the leading way by which teens hear about new brands, according to a survey from Ebates. The results indicate that, while physical stores (58 percent) are among the leading methods of brand awareness for teens, social media also has a significant role to play.

Indeed, about half (49 percent) of teen respondents to the survey reported having heard about a new brand from Instagram, with this platform considerably ahead of both Facebook (37 percent) and Twitter (30 percent). While the study did not net the results for social media as an overall medium, the sizable proportions for each specific platform suggest that social media in the aggregate would be one of the leading brand discovery vehicles for teens. It’s worth noting that two-thirds of the respondents are female, which may influence the results, as women are consistently ahead of men in social media adoption.

(Newspapers and radio were not offered as options in the survey, though another traditional medium — magazines — failed to garner a large share with teen respondents.)

Not surprisingly, teens’ responses differed markedly from those of adult respondents in some areas. For adults, TV ads (70 percent) emerged as the top vehicle for new brand discovery, ahead of word-of-mouth. That’s an interesting result in light of research suggesting that global consumers are more likely to learn of new products via word-of-mouth than TV ads. Additionally, MarketingCharts research into perceived ad effectiveness indicates that word-of-mouth influences purchases for more American adults than TV ads.

Do you agree that brand discovery is changing because of social media? Will today’s teens graduate to discovering brands through more traditional methods such TV and magazines as they age?

Please practice The RetailWire Golden Rule when submitting your comments.
Braintrust
"The biggest challenge for marketers today is not "which" channels, but one of "where and when" consumers experience brands as they now consumer anytime and everywhere."

"This is a tough one. What influenced my purchases the most for the last 30 to 40 years? Word-of-mouth. Not TV."

15 Comments on "Is social media taking over brand discovery?"

Well, while I do agree that brand discovery is changing because of social media, I have to wonder how much word-of-mouth has played a role in teens’ brand discovery among the different generations, because I have to imagine that it has always been extremely important to teens. Isn’t teen life all about not being the uncool kid? Trying to fit in with everyone else? Of course word-of-mouth is going to be absurdly important.

Instagram, sure. And neither of my teens cares a whit about Facebook, so I’m not surprised there. But what happened to YouTube? I think my teens watch that more than TV. But they sure don’t pay any attention to the ads. What happens is, a cool video makes its rounds — via word-of-mouth — and YouTube’s suggestions for related videos drive much of the subsequent discovery.

The most “watched” media today is YouTube, not traditional TV channels or cable. The transformation of brand discovery and interaction with brands goes well beyond social media. The biggest challenge for marketers today is not “which” channels, but one of “where and when” consumers experience brands as they now consumer anytime and everywhere.

Said another way: traditional ads are becoming mere pin pricks in a massive torrent of media that consumers now control how they consume.

This is a tough one. What influenced my purchases the most for the last 30 to 40 years? Word-of-mouth. Not TV. There hasn’t been an Instagram most of my life (and I don’t use it now, either). But I am of the “outgoing” generation of spenders. The “incoming” generation is being raised in the era of electronic and digital worlds so, to that generation, apps like Instagram are and will be more impactful in driving discovery.

Other media will occasionally cause the discovery of new products. As a culture, TV ads are the time when one gets up from the couch to go do something else. Magazines reinforce trends and life styles to which we are already accustomed, with an occasional look that attracts our attention and may cause a purchase. But for the 30-and-under generations, social media, which could be considered a “digital mouth,” and true word-of-mouth will drive discovery.

Couple of thoughts here. First word-of-mouth (WOM), has always been near the top of every ranking of influences for brand awareness and purchase. This has been true before the Internet/social media and will continue with the advent of new media to come. Social media, such as Facebook and Instagram, accelerate this because of its massive one-to-millions reach vs. WOM with its one-to-one impact. Additionally, social media WOM spreads virally from both trusted sources as well as peer groups or strangers. Adding in the immediate access through mobile, social media is the perfect forum for WOM brand communication. As for discovering new brands through traditional media as teens age, yes to some degree they will, but we cannot put the genie back in the bottle here. The Internet and social media have not just impacted teens lives, like a generation or two before them, it is their lives. They don’t make a distinction between Facebook video and TV like we do, they see it as an equal way to consume video content. It is us marketers… Read more »
0
|
0
-   Share

This is true … to a degree. There are multiple factors involved in this discussion. First, to compare to my own Baby Boomer generation, we had far fewer “channels” (like Channel 3, ABC, CBS and NBC) than teens do today. Next, we did have brand loyalties, and they were primarily driven by WOM advertising. Sure billboard, TV, magazines, etc. played their parts, however you chose your brand based upon what it did for your personally. And your loyalty “strength” varied and continues to vary by product category.

Today kids also have brand categories that vary in importance to them. And yes, channels, including YouTube, are enormous influencers. The question is, do we truly consider WOM purely as a face-to-face communication, or can it also be via social channels? I believe WOM definitely now happens via social also, and that is the medium that connects a far wider network of influencers than my old neighborhood had.

Gee, do I agree. I never like to agree to Generation Z or Millennial-related change, but social media is impacting the brand space big time. There is the reality that there is more noise around around how the brands are using their own people or services to plug their brands. As these kids/young’uns wake up and start to SEE the real world and not just smartphone screens their acceptance of new brands will change. In addition as some brands that they loved last year nose dive they will start to think more before acting. They just cannot be seen with that brand that was so hot last year.

Yes, social media is changing how we inform, communicate and propose brand discovery. However, TV is clearly the leader when we examine measurable and realizable purchasing behaviors in major target markets. This will continue for the near term, even as TV “morphs” to be viewed on handhelds (especially sports).

When it comes to an opinion on a product, who do you trust (or want to trust) more, the company’s TV and magazine ads, or the comments by your best friend? The friend, colleague or family member will win.

I believe what is currently deemed as “traditional” will be a history lesson. Traditional will be what has been normal for the consumers before new methods are discovered. For example, today people search content and get advertising messages through YouTube. That’s today’s “traditional.”

TV will co-opt social media characteristics — you will have an up-vote/down-vote button on your future media controller so this question will begin to mean less. But I like a future of TV and magazines — it makes me want to move to the Midwest.

We simply shouldn’t trust self reported studies like this when it comes to a convoluted idea like “Where did you first hear…?”

This kind of research is exceptionally unreliable.

The pervasive use of mobile devices and social media has changed the focus of marketing to consumers forever, and it is constantly evolving. Consumers, especially the Millennial and younger generations, are constantly wired and extremely active on social media. Many of the younger generations never read a traditional newspaper or watch traditional TV. Reaching and influencing these consumers requires a radically different marketing approach that we have employed for the past 50 years. We need to market to our children, not our parents.

As the younger generations age, I don’t expect their habits to revert back to traditional TV, magazine and newspaper. Actually, these mediums are slowly dying and in 10 years, they might not be available in the way we know them today. The bigger question is “what will be the next trend after social media?”

We use the term “Digital Natives,” not Millennials or Gen Z, or any of that. Because people (humans), anyone, who grew up with the latest devices and software strapped to their bodies do not and will never shop the way us “Digital Immigrants” shop or even learn about anything for that matter, let alone brands. Forget it.

We talk to Digital Natives daily and the idea of hearing about and testing out a brand through TV or magazines is pretty much a non factor. Not even on the radar. Have you ever heard of Depop.com? Check it out. That’s how they shop or find out about brands: through each other.

It’s a new dawn, which requires new thinking, which requires jettisoning the old thinking. Marketers need to keep exploring to hit the right note and it’s not going to be easy. Creating word of mouth or word of social, will require much experimentation, diligence and maybe even an entirely new staff.

As nearly every post points out, word-of-mouth has always been way more powerful at influencing behavior than advertising – particularly among teens. Social media has simply amplified and accelerated its impact even more.

Despite it being less powerful, the role of advertising remains … to set the word-of-mouth fire by creating awareness and trial among consumers who will then champion the brand to others.

As today’s teens age, I don’t think advertising will get more powerful as much as I think word-of-mouth will become a bit weaker.

I think social media IS the new “word of mouth.” People are communicating over social media replacing email, phone calls, text messages and in person meetings. “Keep in touch” means following each other’s feeds … So the question is, after the initial discovery that may be by mass media like TV and magazines, any additional dispersion of brand discovery is now done through social media channels. In the future, brands may “launch” initial awareness to generate “first” discoveries, then success depends on social media to propagate the discovery.

I’m most interested in the brand discovery through social media — there’s a crucial distinction between learning about a brand from word of mouth (i.e. organic shares by peers) and social media advertising (sponsored posts, etc). Without making that distinction, we’re left in the dark as to the real value of social media spend.

Braintrust
"The biggest challenge for marketers today is not "which" channels, but one of "where and when" consumers experience brands as they now consumer anytime and everywhere."

"This is a tough one. What influenced my purchases the most for the last 30 to 40 years? Word-of-mouth. Not TV."