Is retail going to the ‘doges’ with cryptocurrency? 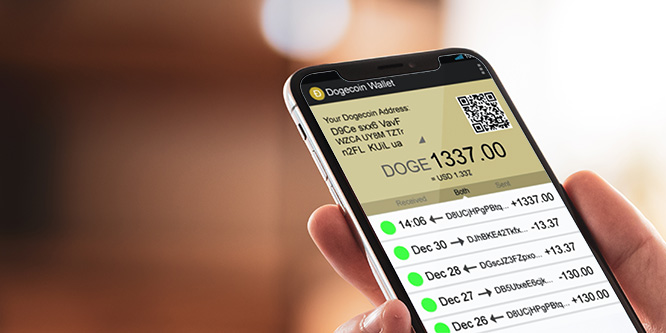 More U.S. retailers are accepting cryptocurrencies for payment, and one brand has even taken to hyping one of the more fringe of the financial products — prompting many to ask if cryptocurrencies will fill a valuable role or create a volatile mess.

U.S. consumers are becoming more comfortable with cryptocurrencies, according to a Harris Poll reported on in Forbes, with three in 10 of Americans calling cryptocurrencies the future of money. Forty-four percent of Americans would be interested in receiving loyalty program rewards in the form of cryptocurrency rather than as cash rewards.

Starbucks now allows customers to convert bitcoin to rewards balances through an app called Bakkt. Whole Foods, Ulta, Nordstrom and Crate & Barrel have partnered with an app called Spedn, which allows users to shop with bitcoin.

These retailers join others like Subway, which has been allowing bitcoin purchases at some select locations since 2013.

U.S. brands have been engaging the cryptocurrency world in other ways as well. In April, Slim Jim started promoting dogecoin, a cryptocurrency created in 2013 as a parody of bitcoin, as part of its social media strategy, according to Coindesk. After sharing dogecoin-related memes, Slim Jim’s Twitter followers increased by 160 percent and experienced a spike in impressions and an uptick in engagements.

Much of dogecoin’s increase in value between January and last week was attributed to the attention Elon Musk brought to it through his social media presence, according to CNBC. The coin increased 12,000 percent in value in the first four months of the year.

More recent developments, however, draw attention to the potential dangers of cryptocurrency, and the potential to leave inexperienced or unlucky speculators in ruins. All of the major cryptocurrencies, including dogecoin, plummeted in value last week.

There are other hazards as well. The Internal Revenue Service is moving to increase regulations on cryptocurrencies over concerns that they are facilitating illegal activity, including tax evasion, CNBC reported.

DISCUSSION QUESTIONS: Should retailers accept cryptocurrencies as payment? What do you see as the potential upside and downside to doing so?

Please practice The RetailWire Golden Rule when submitting your comments.
Braintrust
"I think retailers should accept cryptocurrencies, but do so cautiously."

"I’m firmly in the camp that believes cryptocurrency is dangerous to economies."

"Digital currency exchange is the future. But current cryptocurrencies lack one important dimension of a viable currency for an economy — a stable value."

16 Comments on "Is retail going to the ‘doges’ with cryptocurrency?"

Retailers need to accept all forms of payment that their customers want to pay with. However with so much uncertainty around cryptocurrencies in general, I’d advise retailers to proceed very cautiously on this front. There’s little doubt that electronic payments will continue to become a bigger part of the transaction mix, but I don’t think retailers will lose sales by not accepting cryptocurrencies for the foreseeable future.

The use of cryptocurrencies is growing as 17 percent of Americans now own at least one share of Bitcoin. Consumers are not demanding or expecting retailers to offer cryptocurrencies today. However as the adoption rate continues, there may be a point were all retailers offer this form of payment. Personally, I don’t currently see an advantage to using cryptocurrencies instead of U.S. dollars and don’t own any shares.

With the IRS also saying that they think they’re going to treat cryptocurrencies as property rather than currency, which significantly changes the tax treatment (I don’t know exactly how, except that the traders are very against it so it must be bad..?), I just can’t see this being anything other than maybe hoping to get a stock bump from Robinhood traders who also are deep into crypto. As a percent of tender, I can’t believe this is anything other than literally a rounding error.

However, I just saw a tweet from Aldi making fun of all this after a signage error that listed something at the original price, BPS 7,000, marked down to 79 pence. You can find it by searching “Aldi dogecoin tweet.” That pretty much sums up the risk of accepting crypto, if it does eventually become a larger portion of payment.

Retailers should offer as many payment options as possible, as long as payment is guaranteed by the processing bank.

A sidenote: Cryptocurrencies like Dogecoin and several other variants are the contemporary version of penny stocks – only much worse in terms of intrinsic value and volatility. There is a huge “buy on the rumor, sell on the news” factor going on out there. So people should invest only what they don’t mind losing completely.

I think retailers should accept cryptocurrencies, but do so cautiously. The benefit would be it will force them to get serious about the internal knowledge they’ll need to adapt to crypto, even if they also partner with outside firms to help them. The sooner that real situations and real discussions and learning happen, the better. The downside would be a loss in value but if they tread carefully and have good financial strategies/measures in place they can at least minimize downside risk.

Think of cryptocurrency this way — how would retailers (or consumers) like the U.S. dollar to experience 12,000 percent inflation in four months? Digital currency exchange is the future. But current cryptocurrencies lack one important dimension of a viable currency for an economy — a stable value. Instead Bitcoin et. al. are “traded” more like gold or other commodities than are typical currencies. It’s not the form that matters — the U.S. dollar is most often traded in exchanges digitally. We do it every day when we use credit cards. The issue with crypto for now is the stability. Do retailers really want to accept payment in a currency that might be worth 50 percent of the goods they exchanged it for the very next day? Is crypto cool? You bet! And cool companies like Tesla can decide to gamble on it to sustain their bleeding edge image if they like. Musk gambles bigger on breakfast than most of us do on retirement and it’s his money. But does Kroger really need to do that?… Read more »
5
|
0
-   Share

Today, if a retailer is going to accept crypto, they must exchange it for cash as soon as possible.

I believe now is the right time to begin looking at cryptocurrencies as valid types of tender. Major retailers would not be getting into cryptocurrency unless there were safeguards in place for it not to be a losing proposition, especially for customers that use them in a regular manner and not in the illegal activities that are being highlighted by the press.

No, no, no. Bitcoin has no basis in value, has no currency protection, and wildly fluctuates. Why would any company want this as part of their fiscal portfolio?

Why on earth would retail accept cryptocurrencies, when values rise or fall dramatically without notice? Are credit or debit cards so difficult to use that crypto is the answer?

Cryptocurrency is the future. It may continue to be the Wild West as it is now or they may be sponsored by countries or even banks. It is a result of the globalization of commerce and the ability to solve the friction in moving money place to place or country to country. Crypto is essentially a world currency and will largely be used for non-retail (as most commerce is non-retail today).

For retailers who accept crypto, my advice is to convert them to cash as quickly as possible. That advice may be different in the future, but a business should not be dealing with the volatility that crypto exhibits today.

If I were managing a retail brand I would NOT accept cryptocurrencies at the moment. However I certainly would be hiring a team to create an integration roadmap and monitor what other, more bleeding edge brands were experiencing in the space by doing so. I don’t think the time has come yet – but, depending on your industry, there might currently be an opportunity to gain a loyal niche following by embracing crypto if you have a higher risk appetite. (Disclosure: I do own crypto.)

I’m firmly in the camp that believes cryptocurrency is dangerous to economies. It sounds well and good to create a currency that allows people to control their money directly without reliance on banks or governments. But this also means regulations and controls designed to protect us are bypassed. And it takes away the ability of governments to shore up the economy during hard times. All those COVID-19 related PPP loans and support checks would not be possible, nor would infrastructure and education investment. Having finished my rant, I believe retailers need to decline to accept cryptocurrency to help stop this shortsighted train wreck in its tracks.

It is very interesting to watch the evolution of cryptocurrencies, which is playing out to be another example of how rapidly things can change! The good news for retailers is that payments accepted in crypto can be immediately transformed into USD (or other currencies) as part of the transaction, effectively de-risking the option for the retailer to offer crypto as a payment method. When it comes to how we buy, nearly everything new has some Wild West aspect to it, and eventually the market beats sensibility into itself.

13% + 88%: it appears 101% of people voted in the Poll; while I hope it’s a rounding issue, I think it’s also an apt metaphor for the whole “crypto” concept … namely don’t risk much on something you only “hope” you understand.

A bad idea, at least for now. These “currencies” are extremely volatile, so it’s hard to maintain accurate dollar pricing in real time. That’s a lawsuit waiting to happen. And which cryptcurrencies to accept? Bitcoin? probably. Dogecoin. Not necessarily. Ethereum? Others? Who knows. All this in order to be part of the cool crowd. Because one thing is for sure: accepting these currencies surely won’t cause lines of new customers outside your doors.

There’s also no rush here. Retailers can afford to lose the handful of customers who might be offended that “their” currency isn’t accepted. Maybe five years down the road things will be different, but for now, risks massively outweigh gains.

Braintrust
"I think retailers should accept cryptocurrencies, but do so cautiously."

"I’m firmly in the camp that believes cryptocurrency is dangerous to economies."

"Digital currency exchange is the future. But current cryptocurrencies lack one important dimension of a viable currency for an economy — a stable value."