Is ‘OK Boomer’ a merchandising opportunity? 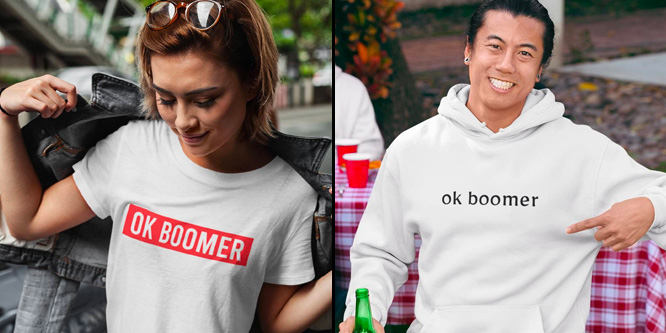 “OK Boomer” merchandise can be widely found on marketplaces such as Amazon.com (467 searches) and Etsy (795 searches), as well as on niche websites such as Bonfire, Teepublic and Redbubble. They can’t be found yet, however, at mainstream chains or even edgy retailers, such as Urban Outfitters and Hot Topic.

The popularity of the phrase comes from Gen-Zers posting the slogan “OK Boomer” on TikTok, the online video-sharing platform, and Twitter as a retort to older generations condescendingly referring to them as “snowflakes” or “Peter Pans” or complaining about lighter topics, such as electronic scooters, tattoos, dyed hair or mobile-obsessed youths.

The phrase becomes controversial, however, when used to call out Boomers’ fair-or-not-fair responsibility for Gen-Z’s sizeable economic hurdles (the high cost of rent, insurance, school, etc.) as well as societal issues, such as rising inequality, polarized politics and climate change.

“It is essentially Gen Z trying to fight back at the baby boomers of the world, who try to put us down a lot and criticize us,” Shannon O’Connor, who has made $25,000 selling merchandise with the two-word slogan, told BBC Radio 5 Live.

She added, “It’s a comeback to say, ‘We’re going to prove you wrong and do great things despite what you might think of us.’”

Embraced by Millennials and Gen-Xers who share resentment about Boomers, the phrase might be used against anyone perceived as old-school or out of touch.

“Baby Boomers grew up in a particular moment in the United States with a lot of moral clarity and economic confidence and certainty that has unraveled for following generations,” Jessa Lingel, an assistant professor of communication and digital culture at the University of Pennsylvania, a Gen-Xer, told USA Today.

The phrase works with Gen-Z in part because it’s passive, sarcastic and biting.

“It’s the digital equivalent of an eye roll,” Taylor Lorenz wrote for The New York Times. “And because boomers so frequently refer to younger generations as ‘snowflakes,’ a few teenagers said, it’s particularly hilarious to watch them freak out about the phrase.”

DISCUSSION QUESTIONS: How open should retailers be to selling merchandise featuring the “OK Boomer” phrase? What’s your overall advice selling political or other potentially controversial merchandise?

Please practice The RetailWire Golden Rule when submitting your comments.
Braintrust
"Like most phenomena that come from online, I suspect this has a very short shelf-life. Anyone wanting to create a sustainable business on the back of it will be disappointed!"

"Sell all the shirts with any slogan you want but remember, we have been in your shoes..."

"It’s not merchandise, it’s a battle cry for change!"

15 Comments on "Is ‘OK Boomer’ a merchandising opportunity?"

I prefer the t-shirt that reads “In my defense, I was left unsupervised”.

It’s a fad — fads sell. Go for it. Going back to “Boomer era” fads like pet rocks or chia pets, if a retailer can generate revenue from this, they should. I wouldn’t view this as overly controversial, just a meme that will get mindshare for a minute until the next thing comes along. As for political merchandise – it could cause some dissent – but then again, almost everything causes dissent from one group or another these days …

Will Boomers be allowed to protest that they feel marginalized and threatened by it, lobbying retailers to remove the merchandise from the shelves? If so, then I’m fine with it.

I don’t think the phrase is particularly controversial. Indeed, it’s rather tongue-in-cheek than being deeply offensive. That said, like most phenomena that come from online, I suspect this has a very short shelf-life. Anyone wanting to create a sustainable business on the back of it will be disappointed!

I love it, so good. It should be used as a statement used by today’s retail leaders, not just on merchandise. “We’re going to focus on fundamentals.” — OK, Boomer. “That new BOPIS system is too expensive.” Ok, Boomer. “We can’t afford to pay people a living wage.” OK, Boomer. On and on. It’s not merchandise, it’s a battle cry for change!

I’m surprised that the phrase is generating this much attention and angst. As a member of the Boomer cohort, I don’t have a problem with it. But OK Boomer’s 15 minutes will be up soon, so if you’re going to sell merchandise, do it quickly.

Any retailer that targets Gen Z, like Hot Topic, Urban Outfitters, etc. should buy domestic blank tees and start screening immediately. At the pace that all things move currently, in a world of nonstop media, there will soon be a new hot phrase that everyone will be talking about!

Despite approaching an age-that-shall-not-be-mentioned, I certainly don’t feel one way or the other about the “OK Boomer” fight.

My opinion about it for merchandise? I think we’re all going to be pleased and/or surprised by how very, very short-lived the fad is. Remember, it comes to us from Tik Tok — a fad generating a fad.

Can we just get back to focusing on creating good businesses, keeping them well stocked with important merchandise, and delivering customer service?

Wow, another whiny moment from our youngsters who feel they have been screwed by my generation. There has never been a better time to find meaningful work, and yet they think they are oppressed. If you want to sell these shirts, good for you, as it actually shows some ambition, which is required to achieve a good life. We have a society of hurt feelings over everything. I say quit blaming others for your failures in life, as all of us have struggled in our lives. My son with autism works five days a week, and is grateful for the opportunity to have a job where people work together and treat him with respect. Sell all the shirts with any slogan you want but remember, we have been in your shoes, and I’m glad my parents raised me properly, always reminding my siblings that nothing is handed to us and to respect your elders. Thank the greatest generation ever, as we just past Veterans Day. If you see a vet, shake their hand and buy… Read more »
3
|
-4
-   Share

Everything in our lives could ultimately be merchandised. However the question is, does it really make sense to make such an investment of time, money, and resources in a viral social media phenomenon? With that said “OK Boomer” has become the rallying cry against stagnation, dealing with the status quo, saying that this is impossible and we’ve always done things this way.

As Nike has proven over the past few decades, controversy sells. This fad may just resonate, even if it’s for a limited shelf life. The lines between our social, digital and commerce worlds are blurring, and retailers and brands should leap at the opportunity to jump on a viral meme.

“OK Boomer” is a term meant to put older people down but, much like the phrase “she persists,” it can be used instead to the Boomers’ advantage. When it is embraced the moniker can symbolize the unique characteristics of this (my) special group.

Retailers can capitalize on the “OK Boomer” niche, those born between 1946 and 1964, who grew up with the Vietnam and the Korean wars, the assassinations of the Kennedys, free love, birth control, the Beatles and many other cultural events. The styles that were popular during these cultural events and the events themselves are still relevant and can be adapted and targeted to the “OK Boomer” crowd.

People love to be part of a group!

What immediately came to mind for me was the Oklahoma (OU) Boomer Sooners…
…someone needs to be a bit more creative with the tagline in order to get any traction IMHO.

As a Boomer, my response is this too shall pass. For those who are making money selling merchandise with the phase on in, I suggest they bank their profits and not reinvest in their business expecting it to have a long run. It won’t.

It’s stupid and it’s insulting. I don’t think things like this — regardless of who they target — are necessary. It’s a nasty trend that needs to go away.

Braintrust
"Like most phenomena that come from online, I suspect this has a very short shelf-life. Anyone wanting to create a sustainable business on the back of it will be disappointed!"

"Sell all the shirts with any slogan you want but remember, we have been in your shoes..."

"It’s not merchandise, it’s a battle cry for change!"