Is Netflix about to replicate Disney’s product merchandising success? 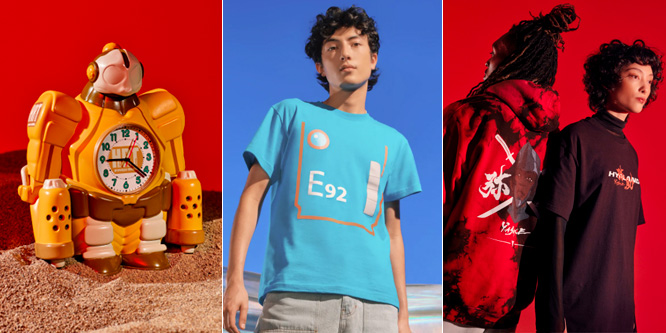 Netflix, taking a page from Walt Disney, will launch an online store to sell limited-edition apparel, lifestyle merchandise and collectibles from its extensive catalog of shows and movies. The site marks the world’s largest streaming service’s first direct-to-consumer retail push.

Major studios often make more money on licensed merchandise royalties than through ticket sales of blockbuster movies. Disney, with franchises ranging from “Mickey Mouse” to “Star Wars,” is by far the licensed leader.

Netflix has been ramping up its licensing deals since the hiring in March 2020 of Josh Simon, formerly at Nike, as VP of consumer products. Recent new partners include Walmart, Amazon, Target, Sephora, Mattel and H&M.

Rather than a massive “Everything on Netflix” site, however, Netflix.shop will offer a rotating selection of exclusive, limited-edition items from select shows. The approach appears aimed to build buzz around shows as they’re released and gaining momentum, as well as to support its broader licensing programs.

Initially, the site will feature products from anime series “Eden” and “Yasuke,” including a “Yasuke” apparel range in a collaboration with streetwear brand Hypland and designer Jordan Bentley. Later this month, caps, t-shirts, hoodies and sweaters tied to “Lupin”, a series about a Paris-based thief, will be available. Created in collaboration with the Louvre museum, “Lupin” items also include a side table for $150 and throw pillows for $60.

In coming months, Netflix will release products tied to blockbusters “The Witcher” and “Stranger Things” and Netflix logo-wear from Japanese fashion house BEAMS.

Netflix is a content-making machine. In 2019, Netflix released 657 first-run original titles, equaling more than nine times the original programming hours from video streaming rival, Amazon.com, according to a study from OMDIA.

Among skeptics is Mark Cohen, the director of retail studies at Columbia University’s Business School, who questions the enduring popularity of Netflix’s often overnight hits. He told The New York Times, “Most of them have a short shelf-life, unlike a Disney property, which is a generational long ride.”

Netflix has revealed no plans for physical stores.

DISCUSSION QUESTIONS: What do you think of the overall merchandising opportunity around Netflix’s ever-expanding library of content? Is Netflix’s curated, limited-edition direct-to-consumer approach with Netflix.shop the right one?

Please practice The RetailWire Golden Rule when submitting your comments.
Braintrust
"You have to have someone in charge who understands the strategic nature of the investment."

20 Comments on "Is Netflix about to replicate Disney’s product merchandising success?"

Netflix has a huge number of hit shows and there is a significant opportunity to commercialize these via selling merchandise. At a time when subscription revenue uplifts are softening, this provides another avenue to expand the top line.

I think this is more opportunistic than “transformational.” That said, it is a huge miss that Netflix didn’t have this before so I’m excited to see what they come up with.

I’d love to see digital content and customizations in the approach here.

I agree with you completely Rick that it is opportunistic, but think of how much money the Bernie mittens meme made from t-shirts and coffee mugs that are now languishing in Goodwill donation baskets. I think Netflix is going to make a lot of money, and fill up a lot of landfills with stuff that has lost its appeal once the show ends.

Interesting. Merchandise for shows like Stranger Things should be a hit. One more advantage — they KNOW who watched what shows! This makes the targeting of e-mails, ads, and personalization on sign-in off-the-charts effective. Although the discussion topic doesn’t call for this comment, the BIG idea is for them to start taking advertising.

I thought it was curious this new store was not connected to the user’s Netflix account. So it could limit the personalization, at least until they connect the two.

I’ve lived through this in a past life with Nickelodeon/Viacom Retail Group. Retail is not for the faint of heart! For studios, you have to have someone in charge who understands the strategic nature of the investment. Otherwise there will always be an enormous amount of pressure to trade the slim margins of retail for the more lucrative licensing business. The limited nature of Netflix’s offering – “get it now or it’s gone forever” – is intriguing as a way to potentially shake up that dynamic.

What’s not to love? Bojack Horseman tees? Ozark coffee mugs? Netflix’s audience has disposable income and a panoply of programs to choose from. The doubters are underestimating Netflix’s reach and appeal.

There’s always a market for licensed apparel around the latest pop culture hits. I do think Netflix has a nice opportunity here to expand their revenue. I will be curious to see how well they do in the digital-only channel. Will they replicate the world’s premier licensed merchandise purveyor? Not for a while.

Merchandise-wise, it’s tough to compare Netflix to Disney because Disney’s product has been around forever and is sold everywhere. Stranger Things merchandise has been available at Universal Studios theme parks for a while so there is Netflix product out there. Still, if Netflix is timely with exclusive, limited-edition items it could be a goldmine.

As merchandising and media converge go, Netflix is wise to lead with its strengths in wildly popular content. More retail and media players will blend physical products and digital services for recurring revenue, data insights and loyalty.

As a culture, the company has been able to change with the times and innovate as needed. I have little doubt that they can continue with that trend and become another Disney.

It is a step in the right direction following the money. I can’t wait to see the full potential of this strategy unfold – brands partnering with content producers to feature their best and most profitable products in a subtle manner and providing an option to the viewer to learn more about it or even purchase it.

Given the number of Netflix productions that are moving toward cult status the opportunity here could be huge.

Movie and TV merchandise for “cool” productions is very popular – aside from Disney, you only have to look at companies like LastExitToNowhere.com to see the impact.

If Netflix do not do this, someone else is likely to step in with “inspired by” merchandise.
One big point about Disney is how high quality merchandise tends to be – Netflix could make a similar name for itself in this way.

Can Netflix make money developing unique and creative merchandising? Absolutely. Are they in a position to replicate Disney’s merchandising success? Not by a long shot. But it’s an intriguing play and their success should come from leveraging some of their advantages they hold over Disney: namely, Netflix is able to tread in more independent and out-of-the-mainstream content from a video perspective, and they may be able to also curate some merchandising opportunities that are more niche-driven that don’t pander to the typical branded set of products (t-shirts and mugs).

If they have the rights to sell the merchandise, why not do it? Netflix has spent a TON of money on acquiring the shows. If merch rights are part of that, then they should take advantage of it. They have a built in audience. They know what their audiences are watching and can personalize the offerings. It’s a great opportunity.

I think Mark Cohen nails it with his point about Disney being “generational” vs. Netflix having shorter-lived properties. But that’s today. As time passes, many of Netflix’s properties have the opportunity to become generational also. “Netflix is a content-making machine.” So the combination of possible generational properties and the ongoing development they will be involved in will give them marketable product for years to come.

Eventually, all in-person and virtual experiences (i.e., streaming content) will lead to follow-up merchandising opportunities to help extend those memories. However, at this time, Netflix is predominantly known for its streaming content. In contrast, Disney has built its empire around its amusement parks, movies, cruises, vacations, Disney streaming content, and the significant merchandising strategies built around each character.

Perhaps in the longer term, strategic merchandising may prove to be a viable revenue stream for Netflix. There are short to medium-term implications of starting up a retail business. These include combining the arts and sciences to drive multisensory experiences that are personalized and are powered by the art of discovery.

In addition, there are back-end infrastructure, supply chain, merchandising systems, pricing, promotional strategies that need to be considered. Until things scale up, this may continue to be somewhat of a novelty for Netflix, as they experiment and innovate in a retail industry that is extremely dynamic and relentlessly changing.

This could be a successful strategy for Netflix if they can provide merchandising recommendations based one the user’s favorite shows and movies. They need to bank on the data here!

Considering that powerhouse of content flowing through Netflix, this is a smart idea and a sound way to create new revenue streams. The secret to success will be in their strategy though. Trying to replicate Disney’s evergreen strategy will likely fail. However, focusing on new/now plus Netflix branded merchandise has good potential for success. I wish them well in this endeavor! Will be curious to see when other (non-Disney) streaming platforms follow suit and the impact that will have (e.g. crowding, SOV etc) in the streaming licensing space.

If Netflix does this right, it could be a strong revenue stream with very little up front cost. Creating unique product for their niche franchises that are not licensed already could be seen as both cool and collectible. Flooding the market with tons of cheap merchandise that all looks the same won’t do it. Owning it exclusively and not creating the overhead of a big store group to start could drive both the show and the merchandise sales.

Braintrust
"You have to have someone in charge who understands the strategic nature of the investment."