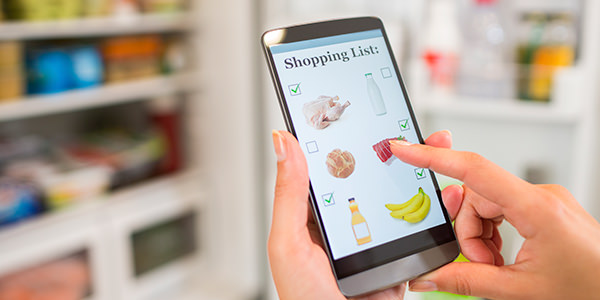 According to Bizrate Insights, mobile website purchases will increase by as much as 68 percent in 2016. The peak volume during the 2016 holiday season is projected to reach as high as 42 percent in November, representing nearly half of all online orders.

Not surprisingly, the gains are expected to be driven by smartphones. Phones will represent 33 percent of all online orders in November, predicts Bizrate. Meanwhile, in the absence of meaningful innovation, tablet purchases will stagnate or decline slightly.

Data for the study was collected from over 540 million online purchases over the Bizrate Insights Network during July 1, 2013 through Dec. 13, 2015. The data does not include in-app purchases.

While estimating that only 1.6 percent of retail sales in the U.S. occurred on smartphones in 2015, eMarketer likewise predicted, “That’s going to change in 2016, thanks to moves by the biggest digital companies — Apple, Google, Microsoft, Facebook and Amazon — to simplify the transition from mobile shopping to mobile buying.”

Hayley Silver, VP, Bizrate Insight, a division of retail marketing vendor Connexity (formerly Shopzilla), suggested that retailers prioritize making it easy for consumers to shop their websites via mobile devices over making changes to desktops and apps in 2016. Ms. Silver said, “Considering the percentage of mobile website purchases projected for 2016, focusing exclusively on your in-app experience may alienate new visitors, thwart conversion or damage your brand.”

Do you expect m-commerce to take off in 2016? What are the biggest pain points retailers should be addressing to ease the transition?

Please practice The RetailWire Golden Rule when submitting your comments.
Braintrust
"M-commerce will continue to be a larger part of online sales in 2016 as smartphone technology continues to improve. From a consumer standpoint, the big challenge is for the retailers to capture this movement by improving the functionality of their mobile sites."

"Today’s teenagers and college students utilize their phones for much of their activity and shopping will grow as they get jobs, start families, etc."

"Global mobile app revenues are expected to grow to $76 billion by 2017. To win the battle for mobile mindshare, retailers are investing in new ways to empower consumers to engage on their own terms."

M-commerce will continue to be a larger part of online sales in 2016 as smartphone technology continues to improve. From a consumer standpoint, the big challenge is for the retailers to capture this movement by improving the functionality of their mobile sites. This includes making the purchase transaction more efficient and making the data to make the purchase decision more easily accessible.

Absolutely. With each of the next few years bringing more young people into the shopping arena, mobile purchases will grow dramatically. Today’s teenagers and college students utilize their phones for much of their activity and shopping will grow as they get jobs, start families, etc. Retailers need to be sure that consumers have easy access to the info needed to make purchasing convenient and have templates that have as little complication as possible for the shopper to load their carts.

In every segment of retail, mobile commerce is expected to continue to soar this year. An article in Drug Store News confirms this. Retailers need to make their mobile app the one customers love to use by designing intuitive experiences that work, interacting in a highly personalized way and using location to their advantage. Global mobile app revenues are expected to grow to $76 billion by 2017. To win the battle for mobile mindshare, retailers are investing in new ways to empower consumers to engage on their own terms. Success is gauged by the ability to effectively monetize mobile interactions by deepening customer relationships and orchestrating the customer journey with a powerful mobile engagement platform. Consumers are fickle, quickly deleting mobile apps that don’t perform as expected. You need to understand your mobile customer’s needs, where your apps fall short and how you can deliver higher value. Go from geo-location tracking to fine-grained proximity marketing. Make your apps even more compelling by infusing location intelligence into your engagement strategy. This is an evolving trend and… Read more »
0
|
0
-   Share

The future success of online of m-commerce is a function of providing the following: product assortment and availability, convenience (easy, fast, transparent), value pricing and customer-friendly delivery and returns. The recent FedEx Christmas performance is evidence of the importance of hassle-free fulfillment options. Address these needs and m-commerce will take off in 2016 and beyond.

We’ve been hearing this rah-rah smartphone shopping for YEARS now, and it has creeped up to something like 5 percent usage. Watched the same thing with what is now Catalina Mobile 15 years ago at Stop & Shop. Then it is stuck because it makes no sense for a massive amount of retail, as far as the shopper is concerned. Until either Apple Watch or Google Glass or something like that makes the interface humanly intuitive, mobile commerce is NOT going to take off. So it is projected a 70 percent increase by some techie company? Hmmm. A year from now it is going to be 8.5 percent from 5 percent today, or something like that. Don’t get me wrong. I would love to see that human-retail engine get more connected electronically. Also, I do believe it will happen. But I don’t trust predictions from people who know next to nothing about real, comprehensive behavior of humans in the retail environment. Their very nearly total focus is transactional events. But then, “in the land of… Read more »
0
|
0
-   Share

“Taking off” is relative but given the numbers for holiday and the small base, it’s clear the 2016 m-commerce number will be sharply higher than last year. The big question is whether retailers will continue to make and increase investments in digital commerce in general. There are still too many cases where retailers’ mobile experiences are way behind those of other digital (and analog) channels.

Set to take off? It already has….

I’ve seen the future in my teenage kids. Hopefully, the industry will stop making distinctions between technology platforms and simply see these all as effective reach and wrap a holistic, composite customer engagement strategy around the reality that virtually everyone has the “tricorder” in their hand that Spock used to have in the late 1960s…people…the future isn’t just here, it’s been here for a while.

As Android and Apple race to consume larger and larger portions of the credit and debit card business, m-commerce will see significant growth. Much of the cash and carry business will be tendered this way in the near future. As for those on the hunt for details and deals, this m-commerce increase is more closely tied to the sites consumers must use to explore options and alternatives. The continuing development of retail sites for larger laptop screens is slow to migrate to the mobile user largely because of cost saving needs or wants. The companies that are willing to explore voice command site searches combined with uncluttered screen responses will see a lion’s share of the inquiries. If this is combined with current pricing trends and low to no out-of-stock issues, a good amount of sales may be had. Wireless mobile commerce is here for the long haul as it pertains to e-commerce and connection devices of all types. The gadgets used will see a lot of change for the foreseeable future, making systems data… Read more »
0
|
0
-   Share

Based on the statistics, it could be 2.69% of retail sales. Is that taking off? Well, a 68% increase of anything is still a 68% increase, so the answer is — sort of…. What can’t really be judged from what is presented is the question, does the portal really matter? Accept the premise that if you are going to be an online retailer in the marketplace, the capability of both standard web and responsive presentation are the minimum baseline to play in the market. The premise that you must be mobile compatible or “responsive” to the device is the minimum expectation to play in the market. Thus, the presentation of the portal really doesn’t matter. What will impact retailers’ opportunities regardless of the device is the ability to execute. The challenge there is that success is not totally in the hands of the retailer — yet. Retailers in most cases still require a third party to complete the process, i.e. FedEx, UPS, USPS, etc. If you can’t get that issue resolved between now and November 2016, how… Read more »
0
|
0
-   Share

Much ado about devices, but in the end, what’s on the other end is all the same entity to the consumer. Much blur between mobile devices, but retailers should continue to move towards providing as seamless as possible an omni-channel shopping experience. It’s a challenge to provide a great shopping experience across platforms, but the reality is that consumers shop where they want to shop, when they want to shop, and for online — on the device of their choice.

I definitely think that 2016 will be mobile’s year. Each year its influence grows and it’s expanding from a research tool to a checkout tool. Mobile is taking over, as Pew research found that 68% of adults had smartphones as of this past fall.

Retailers need to make sure the browsing and checkout functions are seamless. Simply put, if it isn’t easy, shoppers won’t do it. Mobile screens are smaller than computers, so it needs to still be an aesthetically pleasing and efficient experience. Step one is to have a mobile site that works well and the second is to optimize the layout and content to optimize for maximum sales and profits.

Yes, m-commerce will grow. However, because of its small size, it still has a long arduous path to follow before it will have any truly definable impact, and even longer before it will (if ever) have a critical mass. The smartphone is still our communication device, but it is far from a replacement of our computers (and faster communications with bigger screens).

Braintrust
"M-commerce will continue to be a larger part of online sales in 2016 as smartphone technology continues to improve. From a consumer standpoint, the big challenge is for the retailers to capture this movement by improving the functionality of their mobile sites."

"Today’s teenagers and college students utilize their phones for much of their activity and shopping will grow as they get jobs, start families, etc."

"Global mobile app revenues are expected to grow to $76 billion by 2017. To win the battle for mobile mindshare, retailers are investing in new ways to empower consumers to engage on their own terms."