Is it time for retailers to retire ‘offensive’ Halloween costumes? 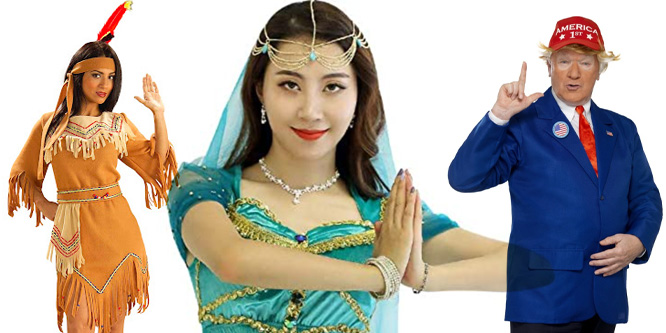 A recent survey of parents of young kids identified a top-ten list of “offensive” Halloween costumes they believe should be banned from stores.

Good Housekeeping’s recently-compiled list of 15 Halloween costumes “that shouldn’t exist” included many of the same costumes, as well as flasher, terrorist, psych-ward patient and any costume referencing body-shaming, an eating disorder or national tragedy.

Turns out many of these costumes are now hard to find in stores such as Spirit Halloween, although hazmat suits, Donald Trump face masks and nun costumes are readily available.

A number of niche costume sites as well as third-party sellers on online marketplaces such as Amazon.com continue to sell Native American-style headdresses, Mexican sombreros and ponchos, as well as straight-jacket and flasher costumes.

Of course, some may wonder instead whether merchants are missing out by not stocking many traditional costumes and have taken some of the fun out of the lighthearted holiday.

OnePoll said the relationship between Halloween and cultural appropriation or stereotyping “has become a hot-button issue” over the past decade, with critics and activists regularly calling out inappropriate costumes on social media.

Among the parents surveyed by OnePoll, 63 percent are being more careful with their families’ costume choices because they don’t want to offend anyone. Nearly half (45 percent) regretted wearing certain Halloween costumes in the past now considered inappropriate or offensive, compared to 37 percent who don’t feel sorry.

DISCUSSION QUESTIONS: Have merchants gone too far or not far enough in removing “inappropriate” or “offensive” Halloween costumes from selling floors? What advice would you have for retailers evaluating whether a costume crosses the line?

Please practice The RetailWire Golden Rule when submitting your comments.
Braintrust
"If you take out anything that might potentially offend a substantial number of people there isn't a lot left. So it's probably better to err on the side of common sense."

10 Comments on "Is it time for retailers to retire ‘offensive’ Halloween costumes?"

One thing is for sure: You can’t teach common sense. Adults are going to do what they do for Halloween. Want to make a fool of yourself, go ahead. But with children, I think any parent with common sense must evaluate what their kids want to wear and explain why some decisions are not appropriate. We will always have these niche costume stores; they call it business — in my opinion, I’ll call it trash.

Quite frankly, we live in a culture where some take offense at everything and anything, as such it can be very difficult for retailers to determine what is best. Clearly retailers must exercise some judgement, but they should take their cue from what is in demand and not try to predict and police what is acceptable and what isn’t to the nth degree.

If you removed every costume on that list from the sales floor what’s left to sell? Clown costumes? Shiver.

We are much more aware of things that are offensive. As we continue to evolve and embrace empathy and understanding there is no place for the inappropriate costumes on that list. Every one of them needs to go.

Stores that sell costumes will have to look for new inspirations and ideas and that’s a good thing. Have you been to a Halloween store lately? Stripper baby? Come on.

Retailers can’t be the only ones held accountable for deciding what is or isn’t appropriate. Costume manufacturers need to do this as well, and ultimately the consumer will decide. There are some costumes that may be universally recognized as inappropriate, but for others what may be offensive to some may not be to everyone. You’ll never make everyone happy, but you can minimize backlash with common sense.

Nothing can beat my home-made costume of Groucho Marx as Captain Spaulding, and he offended everyone (in a funny way). Retailers should monitor the demand for so-called “offensive” costumes for adults and decide what to put out on the selling floor. But for children, use common sense (thank you Rich Kizer).

Halloween is one day a year when people can play a bit with costumes. I think we are a bit too obsessed with forcing uniformity onto that day – which means it’s no longer a day for adults to play-act being someone else.

First of all, any Halloween costume has the potential to offend not just someone, but some significant community. Witches? Devils? Werewolves? Sorry! We have to cancel them since a significant number of evangelical Christians may be offended by celebrating Satanism. Doctors? Sorry! The anti-vaccine community isn’t buying it. And so on, and so on. I guess the point is that if you take out anything that might potentially offend a substantial number of people there isn’t a lot left. So it’s probably better to err on the side of common sense. Blackface? Nazis? Sexualizing children? Klansmen? Clearly better to take a pass. But if you want to make sure you don’t offend anyone, better to cancel Halloween altogether. Offensive costumes are a little bit like obscenity. Most of us might have trouble describing them, but all of us recognize them when we see them.

Everything has the power to offend somebody, but common sense should dictate that some costumes are over the line — with blackface and Holocaust themes topping most people’s lists. Yes, it’s the responsibility of retailers and manufacturers to police themselves, but also the job of anybody buying costumes for themselves or their kids to use some good judgment.

There is a role for “bad taste” in popular culture when it makes satirical points (Mel Brooks, anyone? How about “A Modest Proposal”?) but that role probably doesn’t extend to Halloween costumes.

I guess retailers should use the standard that movies used to use: avoid offending any significant or influential group (which isn’t to say, for example, that dressing as a bull won’t offend vegetarians … or some such thing).

And though many of us may roll our eyes (at what may seem like absurdity) I see this discussion as a good thing: it means we’re slowly getting back back to focusing on mundanities.

Braintrust
"If you take out anything that might potentially offend a substantial number of people there isn't a lot left. So it's probably better to err on the side of common sense."