Is IT insourcing critical to omnichannel? 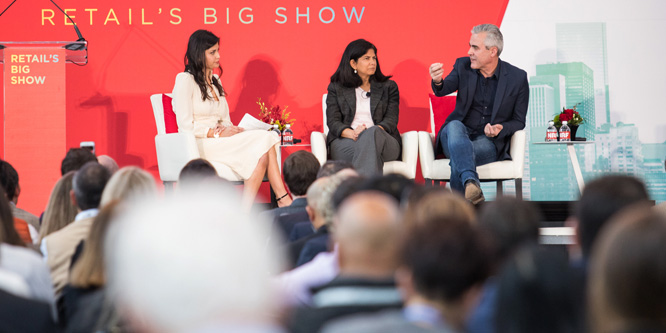 At the NRF Big Show, the CIOs of Lowe’s and Target talked up the benefits of bringing software development in-house to move quicker and be more responsive to meeting customers’ needs.

Target now has a team of about 4,000 IT employees, of which only about 10 percent are outside contractors. Previously, Target had 10,000 IT workers, of which 70 percent were external.

At the NRF session, Mr. McNamara said Target can work with a smaller team because it only prioritizes IT projects critical to its business objectives. The team has developed supply chain software, merchant tools and POS applications with much of the effort supporting pick-up and Shipt-supported delivery.

Mr. McNamara told diginomica that two-thirds of Target’s growth is coming from digital and that digital’s needs are fairly split between technology and process.

“For most of my career, we’ve been talking about omnichannel,” Mr. McNamara told diginomica. “I think Target does it right, and I think we’re one of the very few companies, sizable retail companies, that do it right, where digital is operationally just integrated seamlessly with the rest of Target.”

Target’s internal IT team is also able to release updates weekly versus only a few times a year previously and speed major projects with fewer team members.

Lowe’s over the last few years has developed more apps and website features in-house, including those related to inventory, pricing, customer reviews and associate tools.

CIO Seemantini Godbole believes retailers should insource technologies that are core to operations. Said Ms. Godbole at the session, according to The Wall Street Journal, “Wherever you have secret sauce that you want to put your fingerprints on, for your customer experience or for your own associates.”  “I’ve always believed that you should build your own technology.”

Last March, Dick’s Sporting Goods revealed it was transitioning to in-house software for inventory tracking, e-commerce platforms and other functions due to speed as well as to improve the functionality and ease-of-use of technology for customers and employees.

DISCUSSION QUESTIONS: Has the internal development of software become more important with digital’s increasing prevalence across retail and the fast-changing technological landscape? How should retailers determine which IT projects to insource versus outsource?

Please practice The RetailWire Golden Rule when submitting your comments.
Braintrust
"The challenge is that internal dialogues leading to good accomplishments are always subject to the human dynamic. "

"I decided that retailers should not be in the business of developing software but should rather provide solutions to the business so it can thrive."

"10 years ago I would have said yes, IT insourcing is more important. What’s changed is that there is a constant rise in innovation, new expectations, and of course, hype."

11 Comments on "Is IT insourcing critical to omnichannel?"

There is just no way for retailers to keep pace with what the software industry can do for them. I’ve seen so many situations where solutions were built in-house at tremendous cost in both money and human resources where they did not deliver the intended result. It is much more important to pick the right solution partner while having internal resources prepare for how they will blend the best of outside resources with the infrastructure developed in-house. Technology changes too fast for internal resources to be expected to run the legacy and operational systems while trying to learn the best ways to handle their digital transformation. There may be pieces of the process that can and perhaps should be done in-house but always with a well thought-out plan for who does what and when.

Target is an interesting company to watch on the subject of insourcing IT, because at one point they had thousands of developers working in India. Every retailer will have to be agile to compete; insourcing is one way to achieve that.

Insourcing is not a silver bullet. But the competence and expertise in digital strategy and architecture should not be outsourced. The challenge and opportunity is, there are now tons of pieces of software, each playing a small role in an overall system. That means there has to be an overall vision and understanding of how each of these small pieces fits into the overall puzzle. The ability to be agile in innovating by leveraging new software is key. That skill has to be in-house.

But building software is a different story. Insourcing to build software in-house is a regressive step in terms of speed and go-to-market strategy.

Balance. Internal teams tasked with the ability and freedom to reinvent IT under decades-old structures and policy politics sounds good! The challenge is that internal dialogues leading to good accomplishments are always subject to the human dynamic. Politics, leadership, groupthink, and design by committee all seem to find a home within organizations. It is like a race. Everyone starts out full of enthusiasm, ideas, goals, and then the day-to-day sets in. The balance requires a concerted effort to evangelize forward-thinking by consistently refreshing the internal playing field utilizing relevantly outsourced thought leaders and vendors.

I lead software development departments. I have also acquired external solutions. Then I started to observe how the businesses of retail and of IT were changing and I decided that retailers should not be in the business of developing software but should rather provide solutions to the business so it can thrive.

If a retailer does, in fact, have “a secret sauce” then that would be the exception to my rule. But otherwise, technology is changing constantly and I believe it is much easier for those who develop for a large base of customers to stay current (they must, by virtue of the number of customers they have) than it is for individual companies to try to do so.

I mostly agree with Bob. This is an age-old issue that has gone full circle and back again. Does retail need the level and type of talent required for software development and maintenance? Maybe not but they do need the people who can see and build the strategy that leads to the secret sauce. And if there is secret sauce, it would be in their best interest to create that themselves in-house. Retailers have enough on their plates trying to manage store people, they certainly don’t need the added expense of managing teams of software developers that also ebb and flow based on issues and changing goals. A core team who manages the core systems is the way I see it. And that’s my 2 cents.

In some sense, large established retailers that are thinking about digital solutions and software now are already behind the curve. One aspect of digital that is critical is that level of customization that fits with the business. Too often, companies buy off-the-shelf products that can cause more problems down the road. While 80 percent of a business might be comparable to the next, it’s the remaining 20 percent that can make the biggest difference in success of implementation and using data, analytics and software to drive business decisions.

More and more, retailers are becoming tech companies in that their world is revolving around gathering data and deriving customer insights from that data. This means speed and agility are more important than ever or the insights derived will become too stale before retailers can act on them. One way to gain this agility is to insource the tech development and proficiency required to achieve this. That means bringing in new IT talent that retailers aren’t used to hiring. So yes, if you’re Target or Lowe’s or a retailer of similar size and depth in resources and budget you can insource successfully. However, if you’re a specialty retailer dwarfed in size by Target or Lowe’s, then you won’t be able to compete at a basic level (e.g. salary) enough to compete for acquiring that talent. Remember, more often than not, retailers are competing with software tech companies for the same talent pool for data science, data analytics, etc. types of roles. It’s tough to expect most retailers to compete with the likes of Google, Microsoft,… Read more »
2
|
0
-   Share

Very often, the art of the possible can’t be conceived of by internal teams whose knowledge extends only to the art of “here’s what we do here.” This is a balancing act for sure. Outsourcing can provide key learnings on new capabilities, technologies, and oftentimes is faster and less expensive. The correct answer is “balance.”

10 years ago I would have said yes, IT insourcing is more important. It provides you an advantage in the marketplace. What’s changed is that there is a constant rise in innovation, new expectations, and of course, hype. This constantly changing landscape for retail eliminates the advantages of in-house IT for agility because most retailers can’t afford it, can’t support it, and can’t deliver on it. The Targets and Amazons are exceptions, not the rule. Moreover, the difficulty in hiring, staffing, and building the right capabilities in house are monumental. Projects that are unique to the firm or brand of the firm are the ones that can use in-house vision, but here it’s usually not tech vision, but rather a business view. Some believe that retail is so embedded with tech and digital that it’s become a tech industry — this is profoundly untrue. Tech is still a tool, and retail is the business that decides when and how to use the tool. Sometimes the business will take on tech as a key competency, but… Read more »
1
|
0
-   Share

Braintrust
"The challenge is that internal dialogues leading to good accomplishments are always subject to the human dynamic. "

"I decided that retailers should not be in the business of developing software but should rather provide solutions to the business so it can thrive."

"10 years ago I would have said yes, IT insourcing is more important. What’s changed is that there is a constant rise in innovation, new expectations, and of course, hype."