Is it a stretch for Target to carry Levi’s pricier red tab jeans? 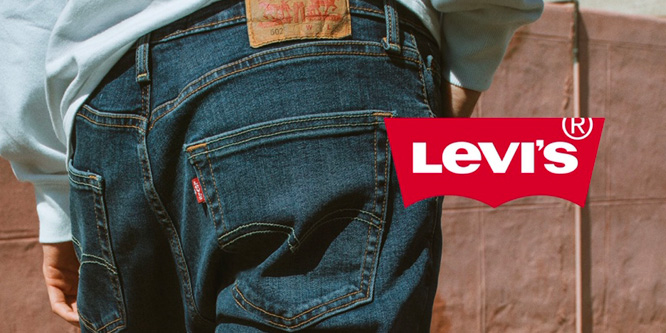 Target has sold Levi Strauss’ value-priced Denizen brand jeans in its stores for years. While it doesn’t appear as though that will change, Target is moving up with the addition of Levi’s premium red tab 505 and 511 jeans at 50 stores selected because they are located near college campuses or urban centers that have high customer traffic numbers. The jeans will also be sold nationally online on target.com.

The decision to add the men’s and women’s red tab jeans at select locations follows a successful test of the men’s 505 and 511 denim lines in 20 Target stores during the spring.

“This partnership is a great example of how Target continues to offer a curated assortment of highly relevant and premier national brands like Levi’s, while also differentiating ourselves by offering only-at-Target brands that we create just for our guests,” said Mark Tritton, chief marketing officer at Target, in a statement.

The decision to test the higher-priced Levi’s appears to have been close to a no brainer for Target. Levi’s jeans, for example, are among the most searched product terms on the retailer’s website.

Target, also appears, albeit on a smaller scale, to be following a similar script as it did with toys following the demise of Toys “R” Us. In this case, according to a Minneapolis Star Tribune report,  Target was able to work out the deal for Levi’s red tab jeans because of the number of stores closed by Sears as part of its bankruptcy.

“Traditionally, Levi’s would have turned its nose up at putting its main brands into what they considered a big box,” Neil Saunders, managing director of GlobalData Retail and a RetailWire BrainTrust member, told the Star Tribune. “They’ve always seen department stores as a more premium channel.”

DISCUSSION QUESTIONS: What does the agreement to sell Levi’s red tab jeans in 50 Target stores say about the strategies being following by the retailer and the manufacturer? Do you expect Target to add other higher-priced apparel lines?

Please practice The RetailWire Golden Rule when submitting your comments.
Braintrust
"This is a smart strategy for a mature brand in a highly-competitive market: go broader and become more meaningful to existing accounts."

"This is a no-brainer! These are not $500 jeans. The red tab fits nicely with the Target brand. (Gee, I am finally agreeing with something Target is doing.)"

16 Comments on "Is it a stretch for Target to carry Levi’s pricier red tab jeans?"

No. If Levi’s can go into shabby, grotty department stores they can go into bright, clean and nicely refurbished Target shops! Target is a way better prospect and has more potential.

Neil, tell us how you really feel about department stores!

In key markets, a curated selection of better Levi jeans is a sure win. I believe that Target already has the shopper base to appreciate the quality/price ratio.

Hey, this is Tarzhay we’re talking about! Of all the “discounters” out there, they’re in the best position to try this type of thing and much more. Go for it, I’d say.

Consumers no longer show loyalty to a single retailer or brand. The Levi’s consumer shops Macy’s, and Amazon, and Marshall’s… and Target. Placing the product where, when and how the customer wants it is essential. Whether other retailers will push back today on brands that cross channels is yet to be seen. Historically, department stores punish brands that sell to mid- or mass-market channels. Only the strongest brands can exist cross-channel, and certainly Levi’s is one of the strongest brands available. Times have changed, so must brands and retailers.

Great move for Target. Helps to reinforce its “cheap chic” image. As for Levi’s this is an updated version of a 25 year old strategy when it first decided to sell its lower end jeans in Walmart and Kmart. The strategy at that time negatively changed the Levi’s image. As I noted then, “You can make it for class or make it for mass, but you can’t do both.” This is more of the same.

There’s a difference between higher-priced apparel lines and high-priced apparel lines. Levis’ red tab moves Target fashion upstream, but it does not make them upscale — it’s a good fit for both players. Using data from shoppers (based on existing product searches) is a good way to ensure success.

Target has built a solid reputation for offering a more fashion forward selection of merchandise (e.g. partnering with designers for 20+ years) so this makes perfect sense. We’re not talking about $300 jeans here – just a more premium offering from what they typically had offered. A win.

This one is easy. Go for it Levi’s. You are trading up from Sears — big time.

Levi’s has jeans that sell for close to $200, but those jeans aren’t from the red tab line. Red tabs are Levi’s classics that retail for around 40 bucks – that’s not a crazy high price point for Target or a Target shopper.

Kohl’s sells Levi’s red tab jeans, so does J.C. Penney, so no, I don’t think it’s a stretch for Target to sell them as well. As a matter of fact, I’m surprised Target doesn’t already carry them.

This is a no-brainer! These are not $500 jeans. The red tab fits nicely with the Target brand. (Gee, I am finally agreeing with something Target is doing.) Let Walmart focus on the $20 Levis, it fits their brand image.

But I will continue to buy my 511s online. It is just plain easier.

Walmart also sells a higher-end (though by no means premium) line from Levi’s and the product always seem to go fast. This isn’t a groundbreaking move for either retailer but it does exemplify Levi’s efforts to own good, better and best within the wholesale customers it serves. This is a smart strategy for a mature brand in a highly-competitive market: go broader and become more meaningful to existing accounts.

Like many of its customers, I’d rather shop in a clean and well-merchandised Target store than a dingy department store any day. Target has a successful track record of partnering with big name brands – this will be no different.

This is just a line extention. It won’t be any big news. This is like a grocery store who adds a loaf of bread that many others are already selling. No big deal.

More and more consumers are buying clothes at the big box stores from which they buy their groceries. Levi’s is right on to get ahead of the curve on this one by placing their product in the right Target doors. I expect this to be a win/win for both Target and Levi’s.

Give the customers what they want. Target’s customers want Levi’s jeans – and some want the “red tab” jeans. It’s simple, if there is a big enough segment of their consumers asking for something, you have to consider it. This is about many product lines, not just jeans. If this works as Target plans it will, I’m sure they will consider other brands.

Braintrust
"This is a smart strategy for a mature brand in a highly-competitive market: go broader and become more meaningful to existing accounts."

"This is a no-brainer! These are not $500 jeans. The red tab fits nicely with the Target brand. (Gee, I am finally agreeing with something Target is doing.)"