Is hot food the ingredient Amazon Go has been lacking? 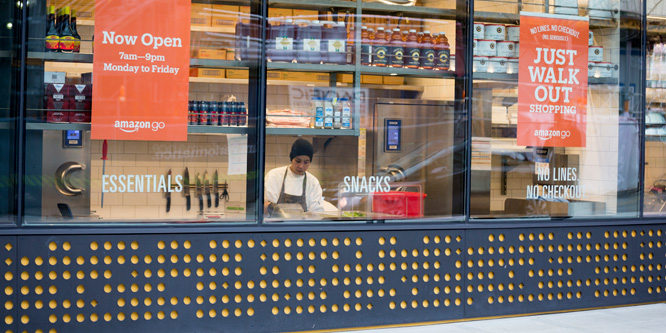 When Amazon Go launched it was billed as the future of the convenience store, but the fully-automated retail store had one notable omission — no hot bar. Now, Amazon has plans to reopen a location with hot food and other add-ons that customers have come to expect from a trip to the convenience store.

Hot food, espresso and fountain sodas will be available at one Amazon Go location in San Francisco after its renovation, according to Yahoo Finance — that is provided the request Amazon made from the city’s Department of Health on January 21 goes through. Another Amazon Go location in the area is closed for renovations, indicating the company may be planning the same enhanced selection.

With hot and prepared food becoming more important than ever to the convenience store space in the past few years, Amazon.com may be piloting these offerings to both compete more effectively with traditional convenience stores and get customers who are still uncomfortable with Just Walk Out technology to give it a try.

Such additions, however, could raise their own challenges. Hot food is high maintenance, and numerous sources have identified the proliferation of hot food at grocery and convenience stores as a significant cause for the uptick in foodborne illness since 2014.

Despite its high profile in the industry, Amazon Go may be in need of a big consumer draw. A report last year indicated that Amazon had fallen far short of its initial rollout plan, achieving a footprint of only 15 stores by fall of 2019. This raised suspicions that a number of factors, such as high deployment costs and hesitation by consumers to adopt Just Walk Out shopping, could be standing in the way of the automated store’s success.

The redesign of the two San Francisco locations, however, indicates that Amazon is pressing forward with the format, as are some of its competitors in autonomous checkout.

Last year, for instance, competitor Zippin launched an automated concession stand at the stadium home of the Sacramento Kings, according to CStore Decisions. The company has also released a modular “store-in-a-box” that allows retailers to launch a 300-500 square foot autonomous micro-store within three weeks.

DISCUSSION QUESTIONS: Are food and drink offerings compatible with Just Walk Out technology? What technological challenges will Amazon Go have to overcome to manage this new set of offerings successfully?

Please practice The RetailWire Golden Rule when submitting your comments.
Braintrust
"The rest of the retail industry will be watching this very closely to see if/how Amazon can 'solve' selling hot food and beverage with Just Walk Out technology."

"I still think this is technology looking to fix a problem few find value in solving. Adding the operational issues of fresh food doesn’t seem to address that."

12 Comments on "Is hot food the ingredient Amazon Go has been lacking?"

Predictably, Amazon didn’t expand the Go concept because its technology platform is ridiculously expensive and probably hard/expensive to maintain. I also suspect that after operating their Go stores for a period of time, they’re just not seeing the pick-up/traction they were hoping for. Adding hot food and drinks will not in my opinion change the outcome.

When I was in Manhattan recently I saw few people at Amazon Go but plenty at Duane Reade and the like. I still think this is technology looking to fix a problem few find value in solving. Adding the operational issues of fresh food doesn’t seem to address that.

I like the Duane Reade — lots of options, easy to shop. I think Amazon Go’s technology is still a little cost prohibitive to expand exponentially, but addressing the hot foods and drinks issue helps close the loop on a more c-store-like option for their customers.

Every convenience store operator knows the importance today of offering food. Amazon realizes that. However the challenges will be in the unattended store, how they provide food and, most importantly, how they monitor it and maintain the food stand. There will be some kinks that will have to be ironed out. I predict Amazon Go will ultimately bend a bit more to a slightly more traditional convenience store, not lose its edge or change its cashless concept, but if they want to be successful they will have to compromise with the desires of the consumer.

At its core, Amazon Go is a convenience play. The only material difference is Just Walk Out technology. There’s no reason Go shouldn’t move through the same evolutionary steps c-stores did — and add hot food. Longer term, traditional c-store players will adopt JWO tech — most likely supplied by some third-party platform in a Platform-as-a-Service mode — maybe from Amazon’s own AWS unit. Why not? Then the question will be flipped — can Amazon compete in the c-store space when JWO is no longer a differentiation?

Part of the challenge of operating a convenience store is you’re essentially running two to three stores in the same location – a merchandise store, a restaurant and a fuel store. That presents all sorts of challenges as you try to serve the customer as optimally as possible. Needless to say, the rest of the retail industry will be watching this very closely to see if/how Amazon can “solve” selling hot food and beverage with Just Walk Out technology. The labor model certainly changes, but if it can drive frequency the margins are there to make it work.

With tobacco sales on the decline, food service has the fastest growth and highest margin in the c-store space. It’s a sound move to integrate them into the Go platform. Can automated food play in the seamless shopping experience? Automated food platforms have been working in Japan for almost 20 years.

It’s also worth keeping in mind that Amazon is innovating and they have enough money to play with expensive platforms. Bezos and his investors have seen the rewards of making expensive, long-term investments. I bring this up because the fact that Go is an expensive platform in a rapidly shifting c-store environment is almost a null point.

I would suggest that Amazon incorporating hot food into their Amazon Go format is not about making the format profitable. It’s all about showing the huge convenience store chains that the Just Walk Out technology can handle everything that they sell. If they can spur the convenience industry to embrace Just Walk Out, Amazon will profit as the most efficient provider.

This is the same approach that they used to dominate e-commerce, cloud computing, etc…

Ken if they want c-stores to adopt this technology they have to prove it can handle hot food and significantly lower the cost. The National Association of Convenience Stores reported the the average sales area for c-stores built in 2018 was 3,422 square feet. The reported cost of the tech hardware in an Amazon Go store is $1 million, which is about 25 percent of the total cost of an average c-store built in 2018.

Amazon is almost always ahead of the market. They are testing and testing – finding out what is working and what’s not. I like that Amazon is willing to keep pushing this concept and trying new things. Will hot food do it? We’ll find out.

Kudos to Amazon for being willing to add some depth to what is likely a “test and learn” program, as part of their overall culture of innovation. Other retailers are constantly trying new products out in varying locations, Amazon is testing both product and delivery models out with this one. All retailers need to embrace “test and learn” as a more organized and institutionalized part of their business process. And clearly technology needs to play an important role in the process.

Amazon Go needs a consumer that is comfortable with the technology, and hot food and drink to fully expand its offering. Developing a following, clarifying their market positioning, and creating a category presence is key to Amazon Go becoming a market presence.

Braintrust
"The rest of the retail industry will be watching this very closely to see if/how Amazon can 'solve' selling hot food and beverage with Just Walk Out technology."

"I still think this is technology looking to fix a problem few find value in solving. Adding the operational issues of fresh food doesn’t seem to address that."