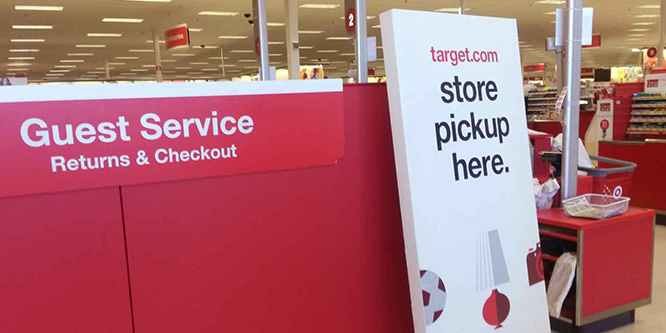 Recently, more retailers have begun to report preliminary success with the ship-from-store model of order fulfillment. At the Internet Retailer Conference and Expo in Chicago, two retailers described their different experiments with using stores in addition to, or in place of, distribution centers in two sessions: one given by Karl Bracken, senior vice president of supply chain transformation at Target, and by Rory Hudson, vice president of Information technology at Zumiez.

During the 2015 holiday season, Target drastically increased its ship-from-store capabilities, extending it to more than 450 stores. Mr. Bracken painted the move as a success.

“At peak, instead of having every product go through our fulfillment centers and trying to figure out how to manage that … and potentially dissatisfying a guest, we’ve been able to take that peak demand and shift some of it to stores so that we can get those orders fulfilled and out to guests faster,” said Mr. Bracken.

Mr. Bracken said 30 percent of orders during the holiday season were filled by stores. He sees flexible fulfillment as being critical to retail’s future and pointed out the need for the company to understand efficient tradeoffs when utilizing different forms of fulfillment.

Zumiez recently implemented a distributed order management system across 600 stores to turn every store into a fulfillment channel, allowing for ship-from-store as well as in-store pickup of online orders.

Mr. Hudson said that the move away from distribution centers has led to reconnecting store sales teams with their customers.

Mr. Hudson told a story of a store associate who noticed that the shipping address was close to where they lived and dropped product off at a customer’s home. Mr. Hudson further reported drastically increased delivery time and customer satisfaction.

In response to an audience question, Mr. Hudson did not clarify how individual stores were incentivized for ship-from-store success, beyond stating that the chain has “a culture around customer experience” and that wage and incentive is a part of that.

Please practice The RetailWire Golden Rule when submitting your comments.
Braintrust
"Ship-from-store can be a boon to brands, however, make no mistake -- this is a warehouse duty, not a salesperson."

"Target’s argument seems to be that a growing percentage of orders is being fulfilled by stores..."

"Experience shows that distribution centers can perform a function between five and 10 times faster than store personnel can."

I wasn’t there but “Mr. Hudson said that the move away from distribution centers has led to reconnecting store sales teams with their customers” makes little sense to me. You want to connect with customers prior to buying your items so they buy more or better items. Connecting after they’ve purchased something requires nothing from the employee but to get the item in a reasonable amount of time. There is no risk from having the person not like them — they already have the sale.

Ship-from-store can be a boon to brands, however, make no mistake — this is a warehouse duty, not a salesperson. When you start paying $15 an hour, I would expect more retailers to realize it is an expensive way to fulfill orders — especially when the face number of employees on the floor has fallen 10 percent since the Recession.

Brick-and-mortar must be much more than a distribution center if you want to have any chance at surviving.

Wow, if you think that customer service doesn’t matter after the sale is rung into the register, then I think you and I have very different ideas of what customer service means. Yes, they have already made the sale, but certainly providing excellent customer service can lead to repeat business. Bravo to the associate who dropped off the purchase to the customer’s home. I’m sure he or she made quite an impression.

That wasn’t the point Karen. Retail employees cannot be remade into warehouse workers and then trumped as being able to connect to customers as if they were still working a sales floor. One is actively working to make a sale, the other is passively delivering a product. And employees dropping off packages outside of work is what Nordstrom got into hot water for many years ago.

Shipping commerce orders from stores is clearly a positive for the customer. It is a relief valve for any retailer that can find the only available unit close to the customer to fulfill an e-commerce order. However, experience shows that distribution centers can perform a function between five and 10 times faster than store personnel can. From an efficiency perspective, the DC is still the king of fulfillment. If retailers can streamline the ship-from-store process, are willing to take on the additional associate time, training and expense required to perform the pick-pack-ship functions, and find equitable ways to financially reward all those involved and concerned, then, and only then, will ship-from-store become more central to e-commerce order management. If one of these ingredients is missing, the mistakes increase, the costs go up and the disappointments ensue. Ship-from-store is an adjunct to, but not a replacement for, centralized fulfillment. Retailers that can carve out space for order processing in their stores, have a higher price-point product line, have the systems in place to communicate, acknowledge and… Read more »
6
|
0
-   Share

Ship-from-store will become more essential in an omnichannel world. It is simply not possible to get stocking perfectly right in each individual store. Nor is it economically feasible to have stores send back inventory to central distribution to ship to other stores. Speed is key in competing with online powerhouses like Amazon. So for all these reasons, shipping from the store will become more critical and more prevalent.

The danger here is that retailers will overlook the staffing and service implications of using floor staff to implement ship-from-store.

I agree with Bob that shipping from store is an operational function that tends to remove staff from customers shopping in the aisles. Staff interacting with customers is the number one differentiator that stores still have. Stores can ill afford to lose that competitive edge by turning floor staff into shipping clerks. The number one complaint of customers is that they can’t find staff when they need them now.

Claiming success depends on what metric you use. Target’s argument seems to be that a growing percentage of orders is being fulfilled by stores — which is doubtless true — but it misses the bigger picture:

1. Is Target growing its overall top-line sales? How about other general merchandisers who are pursuing ship-from-store strategies?

2. Is the ship-from-store trend actually cutting down on store visits, and the chance to sell impulse items?

3. How is the multitasking sales associate (busy fulfilling BOPIS or ship-from-store orders) doing his or her core task of interacting with customers or replenishing store shelves?

On the third point, it’s clear that department stores in particular have allowed their in-store service levels to decline while they try to fund omnichannel initiatives out of the same expense bucket. But by all appearances the issue is costing Target sales, too.

One of the great advantages online retailing has over brick-and-mortar is to be able to support the same level of sales with considerably lower levels of inventory. Balancing inventory to demand across hundreds of stores has always been a challenge, not only in the cost of extensive inventory, but in the price reductions executed to clean out the inventory. Ship-from-store would only increase that challenge.

Some of the comments made already point out the clear challenges related to ship-from-store and there certainly are some. That said you have to look at the very basic fact that chain store retailers can have a clear logistical advantage even over Amazon (yes not to feel inferior for a change) in terms of more locations in close proximity to customer and the theoretical ability to get quick (same day?) home delivery in place. Towards this end, you have to consider that a store is a multi purpose facility and physical design needs to account for these requirements. (Like maybe it’s time to put properly designed back rooms into stores again.) Some of the way we measure store expense also may need an update. That store associate shipping a package is not necessarily a “non selling expense” he/she in reality is actually fulfilling an order and making sales. (Possibly at a higher rate per hour, or with a better wage expense % of sales than one might think.) The measurement of cost to ship from… Read more »
0
|
0
-   Share

Ship-from-store is a part of a broader trend towards decentralized logistics. Keeping more, smaller stashes of inventory has many benefits but the organizational requirements were too complex before digitization. Now we see decentralization everywhere, driven largely by mobile but earlier technologies too — Uber, Instacart, Seamless etc. Rather than getting mired in the details of this or that program, merchants should focus on aligning themselves to the big trends — and decentralizing logistics is going to be a major theme for the next decade.

Flexible fulfillment provides heretofore unavailable inventory management. It will become a retail “Best Practice” as the costs to ship from store are mitigated by mark downs you don’t have to take.

There are two factors giving the lie to ALL click-and-collect, or variations thereon: 1. Store logistics are founded on shipment of pallets to stores, not to fill orders, but to replace sold inventory (or new). Amazon’s logistics are built from the ground up on delivering single items for single customers. There is simply no way to readily smoosh pallet logistics into item logistics, PERIOD… 2. Store logistics are built on the cost of stockers breaking down pallets to replenish warehouse (retail store) inventory, from whence “free labor” (aka shoppers), pick their own stock, deliver it to checkout, and from thence to wherever they want to take it. There is NO way to replace that massive, inefficient, free labor with diverted store personnel. Sometimes I wonder if anyone at retail — other than those not jumping into these guaranteed failures — is thinking through the problems in a holistic way. Just like smart phone apps, they will spend hundreds of millions struggling to get a few percent adoption for guaranteed losing programs, all the while saying,… Read more »
0
|
0
-   Share

Ship-from-store is likely to become more central to fulfillment going forward, but it will really be one of many methods that omnichannel retailers can take to marry their physical and online worlds. Statistics show that e-commerce continues to grow as a percentage of overall retail and that physical store foot traffic is declining. Omni-channel retailers need to offer a great customer experience across both the online and physical channels. Ship-from-store is one flexible option they can give to customers. Others include: Click & Collect – allow customers to buy online and pick up in store Online Marketplaces – provide 3rd party products to the assortment to achieve the endless aisle and capture the long tail Buy online, return in-store – allow customers to buy online and return items in-store; this presents the opportunity for yet another customer interaction, which is an opportunity to cross- or up-sell These are just a few of the options that will be available for more customer interaction. If retailers can provide flexible options that satisfy customers, they will be in… Read more »
0
|
0
-   Share

Braintrust
"Ship-from-store can be a boon to brands, however, make no mistake -- this is a warehouse duty, not a salesperson."

"Target’s argument seems to be that a growing percentage of orders is being fulfilled by stores..."

"Experience shows that distribution centers can perform a function between five and 10 times faster than store personnel can."