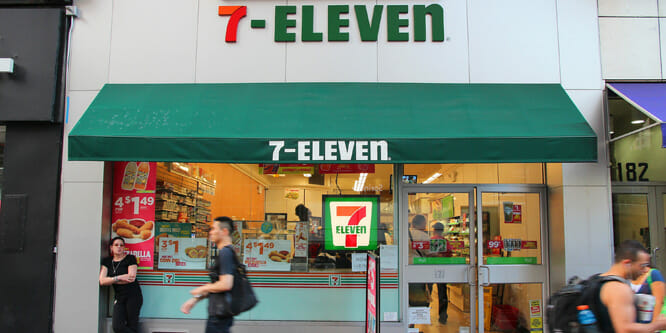 Immigration and Customs Enforcement (ICE) agents yesterday arrested 21 people across the country on suspicion of being in the U.S. illegally. The agency targeted 98 7-Eleven franchised stores in 17 states and the District of Columbia.

ICE announced the action was the largest taken against a business under the Trump administration. The president has spoken against illegal immigrants as a candidate and since taking office. Thomas Homan, acting director of the agency, has pledged to ramp up workplace checks in recent months.

“Today’s actions send a strong message to U.S. businesses that hire and employ an illegal work force: ICE will enforce the law, and if you are found to be breaking the law, you will be held accountable,” said Mr. Homan, in a statement.

ICE, according to a New York Times report, the sweep followed an investigation in 2013 that resulted in the arrests of nine 7-Eleven franchise owners and managers for illegally employing undocumented workers.

A statement issued by 7-Eleven corporate appears to put distance between itself and franchisees that may have hired illegal immigrants.

“7-Eleven franchisees are independent business owners and are solely responsible for their employees including deciding who to hire and verifying their eligibility to work in the United States. … As part of the 7-Eleven franchise agreement, 7-Eleven requires all franchise business owners to comply with all federal, state and local employment laws. … 7-Eleven takes compliance with immigration laws seriously and has terminated the franchise agreements of franchisees convicted of violating these laws.”

A Los Angeles-based immigration attorney, Angelo Paparelli, told the LA Times that repeat violators face higher fines. While perhaps not likely, franchisors such as 7-Eleven may potentially be held liable in some circumstances.

DISCUSSION QUESTIONS: What do expect will be the impact on retail businesses in coming months in light of the Immigration and Customs Enforcement action at 7-Eleven stores across the country? What role, if any, do franchisors have to make sure that franchisees comply with local, state and federal laws?

Please practice The RetailWire Golden Rule when submitting your comments.
Braintrust
"It will be interesting to add up the per-person-caught costs of these retail and other raids."

"Unless they play a role in hiring or controlling employment practices, franchisors should not be held liable."

I guess this is the 2018 federal budget at work, with the requested bump of $300 million to recruit, hire and train 500 new border patrol agents and 1,000 new Immigration and Customs Enforcement law enforcement officers, plus an additional 600 support personnel. It will be interesting to add up the per-person-caught costs of these retail and other raids, especially when you add the significant costs of per-person deportations.

Those who hire illegally are the ones who should be fined. Arrests are a waste of taxpayers’ money.

First only 21 “suspects” in 100 stores is pretty much zero and about as close to full compliance as you can get for any retailer. You could probably go into a half dozen Walmarts and find a lot more. This is a sensationalized story that should have minimal impact. Go into the kitchens of any fast casual restaurant and ICE will arrest plenty. In my opinion the real victims here are immigrant franchise owners. Other potential victims will be owners of hotel franchises like Hampton Inn or Super 8, etc., going after the housekeeping staff.

I spent six years in politics. These raids have nothing to do with immigrants, and everything to do with playing to a base of support. The hardworking targets of these raids, and their communities, won’t soon forget this administration’s priorities.

Unless they play a role in hiring or controlling employment practices, franchisors should not be held liable. This is the fundamental legal principle of agency, where you can only be held accountable for the actions of another if you exerted appropriate control over them.

Given the federal government’s lamentable understanding of moral-legal principles and its muscular tendencies in enforcement, it may well ignore this and try to assert vicarious liability. As much as this is immoral and unconstitutional, retailers and franchisors need to be aware of the hassle and expense of fighting such overreach.

Perhaps we’ll see sanctuary retailers. I believe that knowingly hiring undocumented workers is unlawful. But the raid on 7-Eleven stores is about showcasing the arresting of people for political gain, not deterring unlawful hiring practices overall.
It just makes me wonder aloud as to how many dollars are being spent and what initiatives currently exist to prevent Russia from interfering in our elections.

This is really nothing new, despite the current Administration’s efforts to take credit for “getting tough” on immigration. Some of us can remember similar efforts during the Obama Administration including the April 2010 ICE action against Mike Provenzano’s wildly successful Pro’s Ranch Markets in Arizona. As a result of that investigation 300 people — or approximately 20 percent of the company’s total workforce — were terminated in one day. The raid was later cited by company officials as a major contributor to the firm’s eventual bankruptcy and sale. Many, including Mike Provenzano himself, saw the ICE action as political in the same way that many BrainTrusters are discussing the 7-Eleven raids today. And there’s no doubt that presidents gain big points with conservative voters by getting tough on undocumented workers in border states. Oddly, considering the current criticism against him, especially by President Trump, President Obama became known in immigration advocacy circles as, “The Deporter-In-Chief,” for sending more undocumented immigrants out of the country than his past two predecessors combined. So to the first question,… Read more »
0
|
0
-   Share

The impact of these raids is hard to measure. There are undoubtedly other companies that if they faced the same scrutiny would be found to have the same issue. The real impact is if it forces companies to be more vigilant in their hiring process.

This is purely politically motivated and the only impact that will be felt is in the local communities where these 7-Eleven stores operated, and most likely that will not be a positive sentiment. Producing only 21 suspects through this action is a pretty poor number that only looks sensational if played up in the reporting. If ICE really wanted to produce a large number of targets, they would have more carefully chosen their targets in the hospitality sector as past administrations have done.

As was noted, this is a franchise-heavy industry, so the direct effect will be small. The indirect effect will depend, I think, not so much on raids, but on whether or not meaningful penalties are enforced. Otherwise it’s simply a cost of doing business. (And I’m skeptical that an old and obvious idea is suddenly going to provide a solution.)

As for franchisor’s obligations, I don’t think they have legal obligation, really. How, could they? But maintaining brand image probably assures they dis-enfranchise blatant scofflaws.

This is an issue with small independent businesses in almost every country, particularly Canada, New Zealand, USA, and Australia. Many employees are immigrants and to expect every one of them to be current on their status is unrealistic.

Braintrust
"It will be interesting to add up the per-person-caught costs of these retail and other raids."

"Unless they play a role in hiring or controlling employment practices, franchisors should not be held liable."