How willing should stores be to hire a convict? 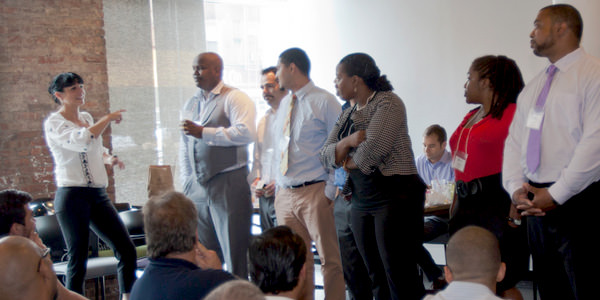 Through a special arrangement, presented here for discussion is a summary of a current article from Getting Personal About Business, the blog of Zahn Consulting, LLC.

One of the pressing social issues we continually confront is the re-integration of former prisoners back into society. Among the largest obstacles this population must overcome is successfully seeking employment once no longer incarcerated.

Recently recognized by best-selling business author Seth Godin and Wired magazine as the Humanitarian of the Year for 2015, Catherine Hoke and her company, Defy Ventures, have created an approach to nurture and develop the entrepreneurial capabilities of former prisoners.

According to Ms. Hoke, her mission is less about pity or shame than recognizing similarities and differences between the "stereotypes" many of us have about prisoners and employers — and the experiences that may have led each of us to make decisions in our pasts.

According to the Bureau of Justice Statistics of the United State Department of Justice, over 60 million Americans have some kind of criminal activity as part of their permanent record. Of those 60 million, 13 million have a felony as part of their record. Even more alarming, the trend is on the rise as the rate to incarcerate increases. At the current rate, the percentage of people projected to spend time in prison within their lifetimes include:

As a result, the pool of applicants seeking employment will include more and more people who have had convictions previously.

Rather than see the prisoners as just their crime, business owners would be well advised to see the person and judge them on their skills, capabilities and capacities. Even the best and most successful of entrepreneurs have had occasions where they have erred — parts of their background that they are less proud of and things they have done that would cause shame, humiliation or embarrassment if publically known. Ms. Hoke’s perspective is not to see people at their worst moment and project from that their entire worth, but rather to see them as they are now and allow them to flourish.

Should stores be open to hiring convicts? What extra steps, if any, should be added to the hiring process in considering such a hire?

Please practice The RetailWire Golden Rule when submitting your comments.
Braintrust
"There are a host of reasons not to hire violent ex-offenders. but there are lots of people behind bars for minor drug offenses. We as a society have to be willing to extend a second chance and welcome them back into mainstream society."

"There is a difference between the person who made a mistake and paid the price and a hardened criminal. Retailers will know this through the vetting process. We are a nation built on second chances. Let’s not forget it."

12 Comments on "How willing should stores be to hire a convict?"

There are a host of reasons not to hire violent ex-offenders. but there are lots of people behind bars for minor drug offenses. We as a society have to be willing to extend a second chance and welcome them back into mainstream society.

Well, it didn’t stop Kmart and Martha Stewart, did it?

My dad was always hiring troubled youths or recovering alcoholics. Well it was far from being highly successful. Like any place of employment you have good workers and bad. There were some success stories, many I never knew of until Dad passed on. What I recall was he never gave any worker more than they could handle or set them up to fail.

Yes they should, and they should have the same hire/fire tactics they have. However with that being said most companies carry out those tactics poorly. So better and hiring better managers might be a better place to start!

I applaud efforts to integrate past offenders into mainstream society. This work needs to continue. Of course, the biggest challenge is that these people didn’t conform to the rules of society in the past, so an employer shouldn’t expect them to easily fit in like everyone else this time around. I think focused, educated managers need to take special care of these new hires to ensure they are not set up to fail. There can be many success stories with the right management training. Good intentions by management shouldn’t be incumbered by a lack of belief in the need for a structured hiring and training process.

Definite YES. Why not. If we go with the research on retail theft, over 20 percent of the people they are hiring already are stealing from them. If you hire people who already have a criminal record you will know what you are starting with and have a better chance of reducing your theft. I would assume that most of them don’t want to go back to prison.

Maybe they will even tell the ones that are stealing that it is not worth the chance of getting caught.

There is a difference between the person who made a mistake and paid the price and a hardened criminal. Retailers will know this through the vetting process. We are a nation built on second chances. Let’s not forget it.

Theft, assault, murder and rape are out of control in this country to the extent that many people are afraid of the walk to and from their vehicle at most locations in the country. We should be aware of this in our hiring practices and policies. There are many service industries where this hiring practice flies under the radar and remains largely successful. In no circumstance that I am aware do the costs of vigilance and security stay the same, in fact they go up. Expecting or even asking retailers to accept more risk without providing relief from the loss in business and the increased costs for security and insurance is taking it a bit too far. The average cost of placing and maintaining a prisoner is fast headed to $50,000.00/yr. When we transfer a majority of the responsibility, we should be expected to transfer a majority of the funds on a declining to minimum level term basis. The public will not differentiate between white collar, non violent and hardened criminal. They will only hear… Read more »
0
|
0
-   Share

Given that shrink is one of the major issues facing retailers, hiring former convicts should be treated with great care and the hiring process must extremely rigorous. It’s too easy in a store to look at all the self-service products and think that it’s okay to take one. While many former convicts do indeed have skills useful to retailers, it’s really important that an agency screen them with great care and make sure that they understand how retail works and how importance reduction of shrink is. Hire them, but be mindful of the risks.

I think there is room for employing non violent past offenders in warehouse and back house functions of retail establishments. To increase their access to cash registers and customer credit cards, etc. seems questionable. Why create yet another reason for customers to eschew brick and mortar for what they may perceive to be safer online purchasing?

Most mall stores today go with a one/one coverage, one opener and one closer. I think that without supervision, any employee will struggle and those with shaky psyches may not be able to handle the stress of single coverage.

I believe it depends on several factors, all can lead to a “yes” or “no.”

A motivated, repentant worker can potentially be a good investment of human capital.

Braintrust
"There are a host of reasons not to hire violent ex-offenders. but there are lots of people behind bars for minor drug offenses. We as a society have to be willing to extend a second chance and welcome them back into mainstream society."

"There is a difference between the person who made a mistake and paid the price and a hardened criminal. Retailers will know this through the vetting process. We are a nation built on second chances. Let’s not forget it."