How should big box chain retailers deal with disaster response? 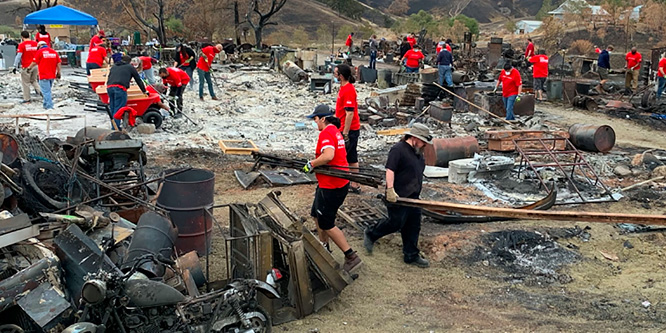 Home Depot  engaged more than 250 associates from merchandising, operations and supply chain teams to move truckloads of generators, water, tarps, batteries and flashlights to stores in Louisiana and Mississippi.

Lowe’s has committed more than $2 million to help those impacted by Hurricane Ida and is hosting “bucket brigade” events to distribute free cleanup supplies to residents. Said Marvin Ellison, Lowe’s chairman and CEO, in a statement, “In addition, we are assisting our associates in the hurricane’s path by helping with evacuation expenses, deploying emergency response teams and doubling our company match through our Employee Relief Fund.”

Walmart has created a “Hurricane Ida Facility Status” section on its news page that assesses the status of its facilities for associates and customers, including a map providing real-time updates on store closings. Since 2016, Walmart, Sam’s Club and the Walmart Foundation have provided more than $108 million for disaster preparedness, response and relief efforts supporting communities around the globe.

Disaster relief is projected to be a more regular need due to climate change.

According to a report by reinsurance company Munich Re that came out in January, a record number of hurricanes, wildfires and floods exacerbated by climate change caused insured losses of $210 billion last year. Damages totaled $95 billion in the U.S. — nearly double losses in 2019 — due to a record number of Atlantic hurricanes and the largest wildfires on record in California amid the hottest year globally on record.

DISCUSSION QUESTIONS: What should be the first, second and third priorities in how big box retailers respond to natural disasters? Will retailers be able to keep up with the escalating rate of disasters?

Please practice The RetailWire Golden Rule when submitting your comments.
Braintrust
"Retailers have long been involved in helping in disaster recovery – it is very much in their DNA."

"The level of support these companies provide is impressive."

"The first priority is always the safety of staff and workers. The second priority is the immediate relief of those in need..."

12 Comments on "How should big box chain retailers deal with disaster response?"

Retailers’ first priority should be the safety of their employees who are directly impacted by the disaster. Second, retailers should execute community support services such as the services listed in the article. While it’s not retailers’ formal responsibility to support disaster relief, as members of the community they serve, I believe they have a moral obligation to assist if they can. This will be an ongoing and increasingly difficult challenge as the effects of climate change become more frequent and severe.

It is good to see the community – including retailers – pulling together during a disaster. The first priority is always the safety of staff and workers. The second priority is the immediate relief of those in need, possibly via donations of products and materials. The third priority, especially for home improvement and food retailers, is to try and get operations back up and running so people have places they can buy the supplies needed to survive and rebuild. Of course, not to belittle the home improvement giants’ contribution, but disasters in terms of preparation and the subsequent rebuilding are beneficial for their sales in the long run – although they also take a hit from the damage in the short term.

If one only gets one chance to make a first impression, answering the call of succor will certainly engage the loyalty of the potential customers to the brand. Additionally, it can make the associates proud that they and their company were there to assist.

They need to take care of their employees first and foremost, especially those impacted by the disaster. Second they need to assist in the community with other disaster organizations. Retailers have long been involved in helping in disaster recovery – it is very much in their DNA.

Retailers like Home Depot, Lowe’s and Walmart should be the gold standard for employee and citizen assistance during disasters. After all, if you take these three retailers’ weekly traffic numbers, it represents something close to 60 percent to 70 percent of the U.S. population! So it makes sense for their foundations and non-profit associations to give back to the communities in which they serve. Other retailers can help as well, regardless of the investment size. Often it’s not about the money, but the actions of Americans helping fellow Americans through a difficult time.

As community members, retailers (big box and others) have a responsibility to their own employees first, then to the community at large. This should be more than a PR opportunity.

I would say that most large retail organizations, especially those who are sources for the products that are needed for disaster mitigation and repair, do a pretty good job providing relief. They know that their success is dependent on the communities where they do business. Walmart, Target, Lowe’s, and Home Depot, to name a few, have demonstrated many times over that they are concerned about their team members and their communities. They have tools to understand when and where events occur, and processes in place to react and support their teams, their customers and communities and their assets.

I agree with Mark – retailers should prioritize their employees and make sure they are safe and taken care of when a disaster strikes. I trained as an EMT and one of the first things you learn as a first responder is to make sure you are safe before attempting to help others. You can’t help others if you’re not safe yourself. This doesn’t mean, however, that the community and customers are not a priority. The whole purpose of retail is to solve consumer needs profitably, and in times of disaster that remains true minus the profitably element. In addition to all of the things listed in the article, the best retailers need to become more proactive in disaster preparedness and create strategies and operational policies that make them better able to serve both their employees and customers when disaster strikes. One example is simply having a plan in place for Gulf stores during the hurricane season that helps all parties be more prepared. Advanced analytics can help with this – everybody knows about water… Read more »
2
|
0
-   Share

As outstanding supportive members/leaders of the community, It’s the right thing to do for their staff/customers and from a business standpoint it’s the right brand statement. Compare the dollars spent on disaster relief, vs. generic advertising and you can quickly see the ROI in doing the right thing.

As noted by Al in the article, big box retailers offer several unique advantages that can greatly help with disaster recovery. They have existing inventory plus the relationships and buying leverage to prioritize access to additional inventory of critical supplies like water, generators and building supplies. They have the transportation and supply chain infrastructure to stage and then quickly move that inventory to where it’s needed. And at this point, as Al suggests, they’ve had enough experience that they have practices and procedures in place to leverage and stage their inventory, distribution and employee assets. This not only gets relief to where it’s needed quickly and efficiently, their ability to be prepared and respond so quickly reduces scarcity and thus discourages price gouging of disaster victims. The level of support these companies provide is impressive.

…move truckloads of generators, water, tarps, batteries and flashlights to stores in Louisiana and Mississippi…: I.e. preparation — “presponse” if you will — is always the first priority, and it extends all the way back to things like scheduling vacations so people are available when likely to be needed (easy to do with things like storms, but harder, obviously with earthquakes).

Beyond that, uhm … I’m certainly not going to tell a company not to offer an assistance program, but I would advise against the impulse to “just do something” ad hoc. Programs need to answer basic questions. Should it be a loan, a grant or assistance-in-kind? And avoid the appearance of unequal treatment — should an employee who suffers an individual tragedy be treated differently than one who suffers as part of a general disaster? Also to be avoided is treating benevolence as a marketing opportunity: a company that offers millions in aid, but has billions in profit, could readily be seen as offering only a token gesture.

Anytime a name brand can step up in the wake of a disaster is an opportunity to endear themselves to their customers. It’s impossible to support every cause and disaster, so brands should pick their lane and help when appropriate. As an example, it makes sense for a hardware store to help people without electricity by providing generators at cost.

Braintrust
"Retailers have long been involved in helping in disaster recovery – it is very much in their DNA."

"The level of support these companies provide is impressive."

"The first priority is always the safety of staff and workers. The second priority is the immediate relief of those in need..."