How should (and shouldn’t) retailers honor Juneteenth? 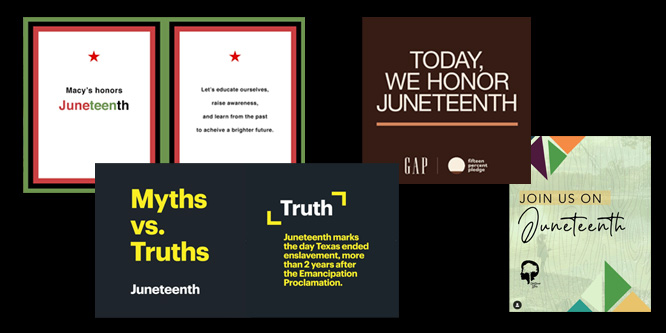 Juneteenth (June 19), which commemorates the end of slavery in the U.S., last week was designated as a federal holiday, creating opportunities and challenges for retailers.

Like most others, the holiday could evolve into a big sales day. Last summer’s protests following the murder of George Floyd raised awareness about systemic racism. Numerous surveys have shown Americans increasingly looking to support Black-owned businesses.

In recent years, many parades, food and music festivals and events directly supporting Black-owned businesses have arrived tied to Juneteenth.

In Detroit, a Juneteenth Jubilee Stroll was held on the day, featuring education, music and artistry as well as a showcase for 46 Black-owned businesses offering discounts along the Avenue of Fashion on Livernois.

For the second year in a row, Black-owned restaurants around Chicago and Atlanta offered food on special for either $6.19 or $16.19 on June 18 and 19. Black People Eats, the organizer, was hoping to generate $1 million in sales over the two days.

Mainstream retailers could potentially shine a spotlight on Black-owned brands as people learn more about Juneteenth. A Gallup poll from earlier this year found 62 percent knew little or nothing about the day.

Others believe, however, that Juneteenth should be a day of reflection, more like Veteran’s Day. Home Depot, Nordstrom and Macy’s are among retailers stressing education internally around the day. Nike and Patagonia closed their doors.

Sales and marketing campaigns tied to the new holiday risk being seen as tone-deaf. Old Navy recently halted a campaign involving Black influencers purchasing Juneteenth t-shirts after being accused of seeking to profit on the day.

Some fear commercialism will rob the day of a chance to further galvanize discussions on racial inequality.

“I remember the fight for Martin Luther King Day over the years, and now this is a sales day,” Earl Fowlkes, the president of the Center of Black Equity, told Insider. “Juneteenth is another opportunity for businesses to sell to Black folks and wrap it up.”

DISCUSSION QUESTIONS: How should retailers commemorate Juneteenth? Do you see the potential for Juneteenth to evolve into a major sales holiday, particularly for Black-owned brands and retailers?

Please practice The RetailWire Golden Rule when submitting your comments.
Braintrust
"Consumers are too savvy – an approach that recognizes disadvantaged communities only in the moment isn’t going to work for much longer."

11 Comments on "How should (and shouldn’t) retailers honor Juneteenth?"

There is a line to be walked with this new holiday. I believe that it is completely appropriate to use the day to highlight Black-owned businesses and drive awareness about their existence and success. I also think that the day should be reserved as a day of reflection, or a day of service to the community. Nike got it right by closing for the day in order to “to provide educational opportunities that honor Black history and culture.”

I think Gen Z and Millennials are savvy enough now that they want to see retailers put their money where their mouths are. I could very well see this holiday becoming a combination of sales bonanza and reflection – where retailers are held to account not just for Juneteenth offers but for how they have invested and supported Black-owned businesses and the community throughout the year. Pride Month is leading the way – the first week of June was full of memes calling out companies that wrap themselves in rainbow flags at the beginning of June but do absolutely nothing else the rest of the year. Consumers are too savvy – an approach that recognizes disadvantaged communities only in the moment isn’t going to work for much longer.

I like the idea of celebrating Black-owned businesses on Juneteenth. I think celebrating the day respectfully with education and service oriented activities is not only appropriate but demonstrates a commitment to customers and employees.

In my opinion I think the most appropriate way for retailers to honor Juneteenth is to use the occasion showcase and promote Black talent – whether within their own ranks, among their suppliers, or the brands they stock. Or perhaps to educate and inform consumers about what the business is doing to promote racial equality. Personally I do not favor such a serious holiday being used for frivolous promotions.

Reflection and education are the proper first steps. Retailers and brands are woven tightly in customer lifestyle and social culture. They need to recognize that Juneteenth is not just Black history, but American history. Before attempting to transform the previously unrecognized Juneteenth into a sales event, retailers and brands must earn that right. Are there tangible actions and progress resulting from their diversity, equity, and inclusion efforts? Are they using this moment to understand and amplify the experiences of Black Americans? Are they creating new conversations that acknowledge the rich complexity of our identities? It’s about being genuine and authentic instead of making a one-off or token gestures to drive sales.

It’s important that big brands and brands that are not Black-owned step back in a productive way that demonstrates that this isn’t about optics. Retailers that only say or do something for marginalized communities when there’s a spotlight on them to do so is disingenuous and exploitative. What Nike did was great, but how can they continue that sentiment of solidarity throughout the year in a practical way?

So far what I saw out of the large publicly traded retailers just looked odd for Juneteenth. Banners on websites that looked thrown together, just text and colors. Zero reference to Juneteenth in-store. It looked sloppy and thrown together at the last second (because it probably was). Mixed in some cases with outdated? Pride Day advertisements, too.

As far as retail goes, given that Amazon has already claimed out this period in June for Prime Day, the large publicly traded retailers who try to turn Juneteenth into a sales day are going to just look desperate.

I do not see Juneteenth becoming a major sales day for large publicly traded retailers.

There is no better way to commemorate Juneteenth than to promote Black-owned businesses. A portion of the proceed from the sales should be put to good causes like education and better quality of life for the community.

As a white, middle aged guy, the first thing that comes to mind is that I don’t really have an opinion on this. But of course I do.

Retailers and brands need to quietly talk to their staff and customers about Juneteenth in order to learn. I hope many don’t touch it, as it is not theirs.

Let’s listen to the folks who hold this holiday as precious and go from there.

Whats odd to me is that for years and still today, NRF held its big show over and during the MLK holiday. I scratched my head that for those attending and exhibiting lost the opportunity to observe MLK holiday. Now, with Juneteenth, the discussion relegates it to selling days and sales. I could be wrong, but MLK and Juneteenth are more meaningful than that. Each should be observed and appreciated rather than exploited. Retailers should observe and respect what each means.

Braintrust
"Consumers are too savvy – an approach that recognizes disadvantaged communities only in the moment isn’t going to work for much longer."