How does Backcountry.com come back from its trademark battle backlash? 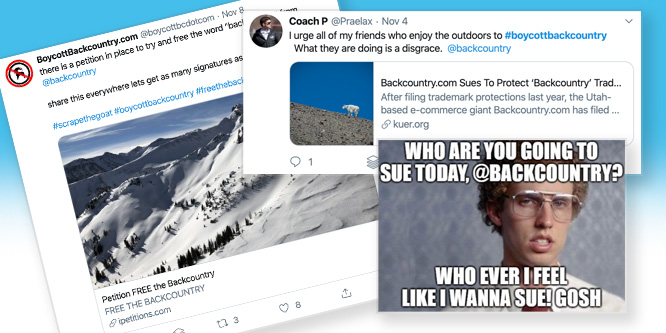 Backcountry.com, a leading outdoor e-tailer, has spent the last two years taking steps to protect its “backcountry” trademark. It took until November, however, for consumers to find out about it — and a social media firestorm ensued.

News of the trademark enforcement actions were first reported on Oct. 31 by The Colorado Sun and coverage quickly followed elsewhere.

Backcountry.com was found to have filed cease-and-desist letters or petitions to cancel trademarks against dozens of small businesses. Some actions led to federal lawsuits. Backcountry Nitro Coffee, Backcountry Denim and Boise retailer Backcountry Pursuit were among those reportedly changing their names under pressure.

“Trademarking ‘backcountry’ is like trademarking ‘camping’ or ‘mountains,’” the group’s founder, Aaron Mattson, wrote in a post. “It belongs to the community and shall not be appropriated.”

On Nov. 6, Backcountry.com finally responded with an apology.

“We made a mistake,” CEO Jonathan Nielsen wrote. “In an attempt to protect the brand we have been building for nearly 25 years, we took certain actions that we now recognize were not consistent with our values, and we truly apologize.”

Backcountry.com fired its trademark law firm and promised to re-evaluate how it handles trademarks. The retailer also dropped a lawsuit and formed an alliance with Marquette Backcountry Ski, a Michigan ski maker that was the only business that refused to settle after being sued. Mr. Nielsen further vowed to make calls to each company on the receiving end of legal action.

The apology was tepidly received. Members on Boycottbackcountry.com have more than tripled to 22,000 since the statement arrived. The group wants a commitment from Backcountry.com to drop any remaining legal action and amends for past actions.

Mr. Nielsen acknowledged the reparation challenges in his statement. He wrote, “We understand that this step we’ve taken may not be enough for some of you. The hope is that we can ultimately win back your trust, even if it takes time.”

Please practice The RetailWire Golden Rule when submitting your comments.
Braintrust
"The company may want to just change its name to prevent future challenges. Even if it wins the trademark battle, it may lose the branding war."

"The trademark battles described indicate that they lost their way in terms of understanding the backcountry/hiking/outdoors community..."

"Unfortunate move in a crowded world of retailers who are already winning with value-centric messages."

9 Comments on "How does Backcountry.com come back from its trademark battle backlash?"

When a trademark battle shows no appreciation for the values of the target audience, I’m not sure a brand can recover. Unfortunate move in a crowded world of retailers who are already winning with value-centric messages.

Protecting trademarks is never fun, but not doing so can result in the loss of the trademark, and it’s up to the mark’s owner to protect it. On the other hand, letting the lawyers call the shots is not usually the best marketing strategy. Bicycle manufacturer Specialized has gone through similar challenges, both with its corporate name, and at least one bike model, the “Roubaix.” While the backlash against Backcountry will most likely blow over in time, the company may want to just change its name to prevent future challenges. Even if it wins the trademark battle, it may lose the branding war.

Protecting a business from genuine trademark or copyright infringement is legitimate. However, trying to trademark everyday words is bad practice and claims against other businesses are little more than vexatious. This has been a huge waste of time and money for Backcountry.com and it has ultimately damaged the brand the firm was seeking to protect. Can it come back? Probably with time, but there is no doubt that its reputation is tarnished.

Agree. The dollars could have been spent on messaging, shopper experience, advertising spends, or local outreach programs to drive growth and performance rather than worrying about business names that aren’t really a threat.

Clearly, Backcountry.com did not anticipate the PR disaster in the making, or the stakes involved. They have every right to protect their trademark, but missed the managing the community part. There are far more everyday things that are patented. Is there anything more common that “Apple”?

I think this will blow over in time, but requires a concerted campaign. It is less about the fact that Backcountry.com filed a patent lawsuit and more about asinine ways in which they might have behaved in the process, which offended the community.

I certainly don’t know who Backcountry.com buyers are, but I don’t think they’re backcountry enthusiasts based on the assortment of products I’ve seen. So here are my thoughts:

Note that I say all this as one who has spent plenty of time in the backcountry. As long as they keep offering good products for good value and with good support, they’ll be just fine. This seems to me to be a case where taking themselves and the response too seriously can only make things worse.

The backlash over Backcountry.com’s inappropriate trademark legal actions will blow over. In fact, this is the first I have ever heard of it and while it is an in appropriate action from an over-zealous legal team, I wouldn’t feel the need to punish the whole company by not shopping with them.

This is a good lesson for all companies to question all actions, not just legal activities, and look at them through the lens of the customer.

Now more than ever, it is important for companies to be good businesses. Good business means being responsible corporate citizens, providing sustainably sourced products, reducing waste, respecting and serving their customers while at the same time making money. Company activities that not aligned to good business are hard to hide with social media and other reporting, so it is important for companies to be aligned to their noble mission and to be transparent to the market.

The trademark battles described indicate that they lost their way in terms of understanding the backcountry/hiking/outdoors community and may have not considered the implications of their legal actions.

I agree with what Doug Garnett shared and think that they will be able to recover and hopefully take this lesson going forward to better serve their customers and regain the trust of the larger outdoor community.

Backlash? Admittedly I wasn’t in the target group, but I’d still be surprised if one-person-in-a-hundred had heard of this.

Really, of course, this case has only a little to do with marketing, and much to do with our sad handling or mishandling of intellectual property. That this kind of legal action was even allowed to go forward I find far more disturbing than its obscurity suggests.

Braintrust
"The company may want to just change its name to prevent future challenges. Even if it wins the trademark battle, it may lose the branding war."

"The trademark battles described indicate that they lost their way in terms of understanding the backcountry/hiking/outdoors community..."

"Unfortunate move in a crowded world of retailers who are already winning with value-centric messages."