How badly will Macy’s be hurt by its Black Friday outages? 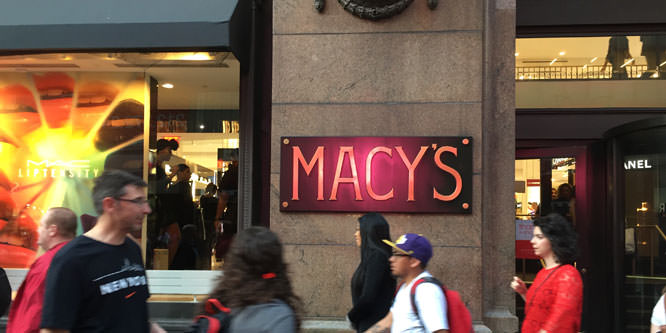 On one of the biggest shopping weekends of the year, it has become at least as important for retailers to have a strong online presence as a brick-and-mortar one. But Macy’s attempt to manage the changing face of Black Friday last week did not go according to plan.

From 12 p.m. to around 5 p.m. on Friday, the Macy’s website experienced intermittent service outages, reported Bloomberg. Some shoppers received an error message when visiting the website, which indicated that the site was experiencing heavier traffic than normal and suggesting a time span to retry their visit. Mobile users also noted being directed to a message indicating the website was down for routine maintenance.

Macy’s was not the only major retailer that experienced website outages on Black Friday. Express, Victoria’s Secret and Pier 1 Imports all experienced some degree of slowdown or errors according to Bloomberg, accompanied by customer venting on social media.

But the Macy’s case may be drawing the most attention, given the retailer’s avowed commitment to technology investments. The company has been public about increasing its use of in-store technology to reinvigorate the shopping experience and bring customers back to its stores. In July, for instance, Macy’s began testing an AI-based mobile tool to answer questions for in-store shoppers, Forbes reported. The retailer has also implemented smart fitting rooms, tablets and other gadgets to help shoppers in some locations.

These statistics indicate that, for retailers, focusing resources on their online presences during the time surrounding Black Friday should be top-of-mind.

As the protracted retail holiday continues on, Macy’s has offered big online deals for Cyber Monday — also promoted as “Cyber Week” on their website.

RetailWire was unable to find any reports of Macy’s website experiencing slowdowns or crashes on Cyber Monday at the time this article was written.

DISCUSSION QUESTIONS: Will Macy’s holiday results be hurt by the failure of its website to work correctly on Black Friday? What lessons can other retailers can learn from these high-profile holiday website problems?

Please practice The RetailWire Golden Rule when submitting your comments.
Braintrust
"Clearly it was a big blow and a lost opportunity, but the season is still young."

"Sorry, no technology will be as reliable as being there. No AI shiny object will drive sales when it is overloaded. "

"Pain points for shoppers are not easily forgotten, especially if they are served up over and over, across the omnichannel experience!"

14 Comments on "How badly will Macy’s be hurt by its Black Friday outages?"

There is no excuse for this happening. Resources exist to handle the kind of surges holiday sale events bring. Hardening and testing methods are old hat. Whatever the cause, Macy’s needed to be prepared.

Clearly it was a big blow and a lost opportunity, but the season is still young. Macy’s knows how to discount and drive sales, so ultimately I believe they can make it up. But of those shoppers that experienced high frustration levels, some may have lost faith in the brand and effectively defected to merchants that have a reputation for coming through — there’s one that starts with an “A” I think. Those shoppers will be hard, if not impossible, for Macy’s to win back.

Sorry, no technology will be as reliable as being there. No AI shiny object will drive sales when it is overloaded. Free shipping means nothing on December 25. No mobile-first strategy is foolproof. Saying put more money into it to fix it now seems a bit naive — I didn’t read about Amazon’s outages …

In-store is no less fallible. Here’s but one example. Not to mention brick-and-mortar issues year after year around out-of-stocks, long lines, nasty personnel, etc. It’s not about technology or traditional methods, it’s about upper management guiding the ship properly, a customer-first mentality, preparedness and execution.

Agreed, but one could say server overload is nothing new. The more bells added, the more impatient customers become with the promise of easy online and in-store apps and the miss is infinitely magnified across all channels. Our discussion today is evidence to question going to Macy’s online.

Macy’s created a set of expectations it failed to fulfill. Never a good thing for a retailer to do. Can they recover? The answer is yes — but … The short-term “but” comes from those customers who made that purchase elsewhere. Those sales cannot be recovered.

The longer-term “but” is, how will those that experience the website issues and those that are hearing about it in the press react this year, and perhaps even in future years? Once customers have lost faith in a retailer’s ability to deliver, it takes a lot of work to regain it.

For a national department store to have this problem is serious. Consumers assume the company does not know what it is doing and is not a quality operation. The consumers who were ready to shop probably went somewhere else. Not good.

Macy’s will be hurt by Black Friday outages, but the pain will be short-lived. The lesson is that retailers must have more server space than their highest projections, and have redundancy built into their systems. It’s a cost of doing business, whether needed or not. Macy’s, which has seen sales lag, needs every sale it can get. It’s unfortunate that it lost sales to avoidable technical problems.

Take note, CFO. Technology is the basis of business and all investments are useless without the assurance that they will operate. As big dollars are spent on software maintenance and upgrades, new investments can move from planning to proof of concept to mass rollout rapidly. Your IT group may not be good at asking for the right amount of budget, but since business strategy is digital strategy is customer engagement strategy, the business depends on adequate budgets and safeguards.

I agree with Steve’s comments that having clients lose faith is a downward spiral given the fickle nature of most consumers. The last think you want to do is have loyal customers lose faith in your brand.

Lyle, good point too on highlighting the importance of this issue to the CFO. You really want quick and massively scalable systems (think SaaS) to quickly adapt to peak loads, like what they experienced. Without enough tech investment the whole chain can easily break. What remains to be seen is the total value of lost customer lifetime value from large, public incidents like this.

Based on my experiences with messy stores and either nasty or disinterested associates, Macy’s has inflicted a lot of in-store pain on shoppers over the last 12 months. They continue to send me offers I cannot use because I cancelled my credit card out of frustration.

And now this technology mess for online shoppers? My guess is that the big-A website got the traffic and a chance to convert a lot of shoppers. Pain points for shoppers are not easily forgotten, especially if they are served up over and over, across the omnichannel experience!

Quit keying off Macy’s and start with the many websites that were slow to respond or down. Everyone loves to hit Macy’s with any negativity possible. Why? Great merchants and a strong technology team. Hey, internet problems are not just the fault of the retailer (in most cases).

In retail, it is all about customer experience and trust. You never hear about Amazon’s site being down. Anyone that wants to compete needs a strong digital experience as table stakes. Website downtime crushes any trust customers might have with a retailer, and is a critical mistake.

You miss those day’s sales, but the consumer will come back if the deal/incentive is there. But can Macy’s afford to lose any sales this holiday? I would think the Chief Technology Officer felt the most pain.

Maybe this was their effort to “reinvigorate the shopping experience and bring customers back to its stores”? Or not.

OK, of course it will hurt, how could it not? But in the big scheme of things, it’s probably not that important … which is a nice way of saying Macy’s has so many issues on its plate this is just one more. And at least people were trying to shop, what if there had been no outages because no one was online?

Braintrust
"Clearly it was a big blow and a lost opportunity, but the season is still young."

"Sorry, no technology will be as reliable as being there. No AI shiny object will drive sales when it is overloaded. "

"Pain points for shoppers are not easily forgotten, especially if they are served up over and over, across the omnichannel experience!"