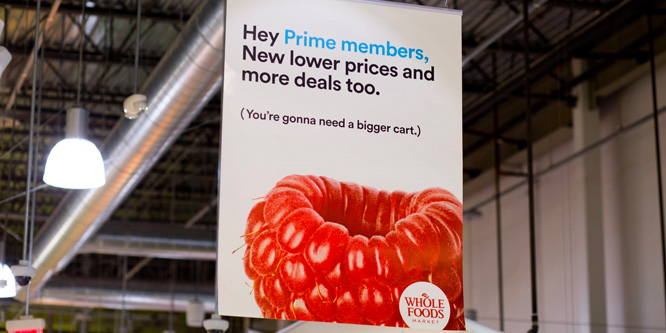 Whole Foods co-founder and CEO John Mackey says the chain and its parent company (Amazon.com) are serious about ridding the grocery chain of its “Whole Paycheck” image.

In an interview with CNBC earlier this week, Mr. Mackey said Whole Foods has gone through three rounds of price cuts since being acquired by Amazon in 2017 and is currently in the process of another round.

Price cuts trumpeted by Whole Foods in recent years have been dismissed by some as simply “noise” as the retailer selectively reduces prices on key items, allegedly giving an impression of savings while overall market baskets remain largely unchanged.

The chain, like all others in the grocery industry, has seen its costs rise with the outbreak of the novel coronavirus. There does seem to be a respite coming for grocery as the rush to stock up on food and everyday staples has eased due to the fact that consumers are getting used to living and shopping in a period of pandemic. Further, millions of Americans have less cash because they are unemployed as a result of COVID-19 and/or are waiting for another round of economic stimulus action by the federal government.

“As we look forward, we see lower inflation than what it’s been over the last several months,” said Mr. McMullen. “It’s one of the reasons why we didn’t pass through all of the inflation that we incurred in the second quarter.”

Kroger’s CEO pointed to meat as a key category where prices are leveling off.

“There’s plenty of raw materials supply out there,” he said. “It’s just a matter of the plants being able to process it.”

DISCUSSION QUESTIONS: Is being perceived as price-competitive a necessity for Whole Foods to continue growing its store footprint nationally? How effective do you think previous cuts have been in altering the chain’s pricing image, and what further actions should the chain take?

Please practice The RetailWire Golden Rule when submitting your comments.
Braintrust
"Whole Foods has a lot more work to do in sharpening its value credentials."

I just got back from shopping at Whole Foods yesterday. Yes, they have lots of 365 brand products at reasonable prices. But I don’t think that’s why people shop there. Meat, fish, and produce prices are still very high, even with my Amazon Prime discount. Don’t buy the price cutting hype.

I think the 365 brand items are taking too much space for the stores, given the audience of the Whole Foods Store. To me it looks like Whole Foods has a poor selection of center store branded organic items compared to Sprouts and also compared to Natural Grocers (this place has by far the best selection of center store branded organic/natural items as it hardly has any private label stuff).

No, absolutely not. We have done a lot of research on things like price perceptions and Whole Foods still has one of the worst price perceptions of any grocery retailer and, while there has been some improvement, it is very minor. There are a few issues here. The main one is that consumers assess prices based on the entirety of the offer – or their final bill. So while Whole Foods has brought some prices down, especially on essentials, other products are highly priced. While the higher prices may be justified on the grounds of quality, it still means the total spend is high. The second one is that Whole Foods is still more expensive on like-for-like items than Walmart, Target, Kroger and even Amazon. Areas like bottled water, laundry detergent and other things are priced way higher. A lot of consumers notice these thing and feel like Whole Foods is ripping them off. The third is that Whole Foods’ whole proposition is not great value for money in my opinion. Service in some stores… Read more »
15
|
-2
-   Share

I am sitting with my wife this morning and asked her about this. She is much more aware than I. She said the like-for-like items we purchase are no more and often less expensive at Whole Foods.

No disrespect to Mrs Detroyer, but statistically this isn’t true. We gather hundreds of thousands of prices every week as part of our ongoing analysis and in areas like laundry detergent, bottled water, soft drinks, paper products, condiments, and others, Whole Foods is consistently more expensive than rivals. They also have far fewer special offers, which further pushes up the price differential. To be clear this is only for branded products which can be properly compared across retailers.

Based on what I have seen of Whole Foods pricing, relative to competitors, it depends on region. Whole Foods pricing is high-high-high and doesn’t vary much by region (it varies a little…). If someone is in the San Francisco Bay Area, they will find many produce and center store items priced lower at Whole Foods than at the conventional grocers there (primarily Safeway, which is outrageously priced in that region). Conversely, if someone is in, say, Phoenix, where all grocers (including Safeway) are on a much lower pricing scale than in the Bay Area, the pricing at Whole Foods on those same items will seem quite outrageous.

Personally, I’m not impressed with the quality at Whole Foods since the Amazon purchase. Service has noticeably declined. Produce is not as fresh (prices may be down a little there), meat quality is not great (prices don’t seem to be down there), and I was never a big fan of Whole Foods deli/bakery, which is worse as prices have kept increasing there under Amazon.

Niel, statistically, that may be true, but for like item we buy it is not. Organic milk (as noted earlier) isn’t even close. For a brand, 7th Generation is less at WF, as is Stoneyfield Yogurt, to name a couple. Organic berries are cheaper at WF. Bottled water at 69 cents a gallon is hard to beat.
I am not expert in comparative pricing, but I assure you, she would not spend more at WF for the same product she could get cheaper at the supermarket across the street.

Certainly, on everyday branded products, WF loses the price comparison. But, that is not what WF is about.

Whole Foods being perceived as price competitive is definitly a plus in the eyes of the consumer. Price perception has always been one of the key drivers to retail sales and creating cash flow to support expanding a retail chain’s footprint. I do wonder about the consumer perception of Whole Foods price discounting requiring an Amazon Prime subscription.

So missing the big picture but then they were still offering Groupons just two years ago. The discount shopper is not loyal. The more Amazon breaks down what made Whole Foods what it was, the more likely they are to lose the target market that made them.

Well, this goes back to my question yesterday about the need for “Amazon Fresh” stores. If Amazon really believed it had changed the brand’s image, why exactly would it need another banner, using different technologies?

Sorry to be a spoil sport, but these moves simply don’t make any retail sense to me. What is your brand? What does it stand for? What technologies do you need to make it work?

These moves answer none of these questions, and bring up more than they solve.

Well said Paula. I think you and Gene capture the heart of this discussion. We have a chain here in AZ called “AJ’s” that makes Whole Foods look like a bargin bin. No one complains about it, that is who they are: “Purveyors of fine food.” Most of us just wish we could shop there all the time. If they started discounting everything to match a nearby Safeway, they’d be gone. To your point, no one complains about the price of a Bentley either.

“Price cuts trumpeted by Whole Foods in recent years have been dismissed by some as simply ‘noise’ as the retailer selectively reduces prices on key items, allegedly giving an impression of savings while overall market baskets remain largely unchanged.” ABSOLUTELY TRUE!

We shop there every week and as I have stated so many times on RetailWire and still find true today, SKU for SKU on many, many things we buy (now purchased elsewhere!), Whole Foods is significantly more expensive. Not similar items –SKU for SKU.

Oh, how I can go on… but I’ll leave it at saying, Mackey has a lot of hypocrisy to explain and this is one example.

Whole Foods is synonymous with quality and upper-end premium foods. With that premium comes the high costs and associated markups. While we have heard all about the intention to lower their prices to reach more value-driven and price-conscious consumers, the meat, fish, poultry, and cheeses remain at a premium price.

While the 365 brands have become ubiquitous throughout the store, and are value-priced, in general, their items are higher priced compared to Trader Joe’s, Kroger, Walmart, and other grocery competitors. The expected Amazon Prime savings proposition has been underwhelming, to say the least, as the promotions are few and far between.

For such a high priced experience, customers are expecting premium service and some sort of recognition for being loyal customers beyond the very minor Prime savings.

“Perception” may be the most ineffective mind-changing tool ever. It is a fragile strategy equivalent to “I think…” or “I’ve heard…” Or even better we can use the words “allegedly giving the impression” and “noise” as George’s article does. The prices match places like Sprouts or Trader Joe’s or they don’t, no perception needed. Hype fails the moment one decides to “try out” Whole Foods only to find bananas at 79 cents when they got them at Sprouts last week for 59 cents.

Thought I’d better fact-check my banana data this morning and got this at the top of the first search page: “$1.05 for five bananas ($0.49 per pound) Bananas at Whole Foods used to be $0.79 per pound. Now, at $0.49 per pound, you can get them for about the same price as at Trader Joe’s.” Shopper’s conclusion? Trader Joe’s it is!

While the 365 line products are (more) price competitive, that is not why consumers shop @ Whole Foods — they go for organics, prepared foods and special items which are premium priced. If Whole Foods wants to keep Premium core customers they need to pay attention to their stores which are a mess with Amazon pick-up and pickers and often out of stock on produce basics.

It looks like as we go into what appears to be a tough economy, Amazon needs to get its PR machine going on more “price cuts” at Whole Foods. I think this time the consumer will see right through their PR and it will not work. As long as Whole Foods runs a top quality operation, it does not need to be price competitive. It needs to focus on being a top quality operation because that is what Whole Foods is supposed to be. I am just not quite sure it is there, anymore, under Amazon. Also for some Whole Foods, ready to eat foods were a significant profit center (and a real price ripoff for the marginal quality — much of that prepared food isn’t Organic or Grass Fed anything unless explicitly labeled as such). COVID has caused self serve food bars to close, work at home orders have removed office workers from stores at lunchtime, and I suspect Whole Foods had seen a big profit hit as they can’t sell any more $9.99/lb… Read more »
3
|
0
-   Share

Braintrust
"Whole Foods has a lot more work to do in sharpening its value credentials."