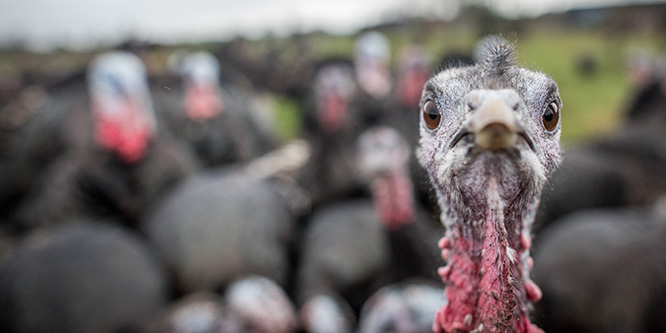 Over the summer, America heard how toy shortages might ruin Christmas. In recent weeks, the storyline has shifted to how turkey out-of-stocks could ruin Thanksgiving.

According to the U.S. Department of Agriculture, the nationwide inventory of frozen turkeys was 24 percent lower than the three-year average in August. Much like toys the turkey shortages are being largely attributed to supply chain disruption, particularly the reduced availability of trucks and drivers.

“I don’t like the word ‘shortage’ in this scenario. It’s not like we forgot to start raising turkeys,” Trey Malone, an agricultural economist at Michigan State University, told Vox. “What’s really happening is that you have these disruptions along the supply chain. It’s not because there’s no turkeys, it’s that the turkeys are in the wrong places at the wrong time.”

News reports of shortages and overall supply chain challenges have been driving early purchases of turkeys with some farms reporting early sell outs.

Stores need the right mix of sizes as well. The Wall Street Journal reports that grocers began sourcing turkeys as early as February to get ahead of the supply chain constraints. Many are believed to have stocked up on larger turkeys in anticipation of bigger gatherings, but due to the arrival of the delta, smaller birds will again be in demand.

Nearly two-thirds of Americans plan to spend Thanksgiving with just their immediate family, according to an October survey from Morning Consult. Last year, smaller birds wound up being in lean supply.

Finally, whole frozen turkey prices are up about 20 percent year-over-year, reaching an all-time high, according to the Department of Agriculture. The increase is traced to higher feed and fuel prices. With turkeys often used as a loss leader, supermarkets will either lose more margin or find turkey sales less of a traffic driver at inflated prices.

DISCUSSION QUESTIONS: Will shortages and higher prices for turkeys this year be more due to external challenges or internal missteps by grocers? What lessons does it offer for grocers trying to adapt to today’s supply chain challenges?

Please practice The RetailWire Golden Rule when submitting your comments.
Braintrust
"Grocers may get blamed for Thanksgiving shortages, but it is really a much bigger supply chain issue."

"Are supply chain woes a smokescreen to move the needle and reset expectations?"

"I expect all the counterbalancing factors to produce another Thanksgiving like last year’s."

11 Comments on "Have grocers mismanaged Thanksgiving?"

Grocers may get blamed for Thanksgiving shortages, but it is really a much bigger supply chain issue. Labor availability is a root cause, affecting turkey processing plants. Fewer workers means fewer birds processed, as well as limitations on how much further processing – such as deboning, portioning etc. – can be done. Fewer birds processed means longer waits and results in bigger birds, further impacting what is available for consumers. Higher costs are also an issue. Grain prices remain elevated, which means feed costs are higher, and can affect decisions about how many birds get raised. Transportation costs are higher, labor costs everywhere are higher – which ultimately translate into higher retail prices for customers for Thanksgiving dinner.

I completely agree that there are general shortages in stores and prices are definitely higher as a result of this and of supply chain complications. However I think some of the reporting is grossly over exaggerated. Most retailers, including Kroger and Walmart, have plentiful turkey stocks and most processors and suppliers are also confident they can meet demand. Sure, there may not be as much choice – particularly in some sizes and varieties – but most people who want turkeys will still be able to get them.

I don’t expect much change from last year. The economy is decent, people are still wary of COVID-19, but families are eager to get together. I don’t expect the sky to fall, although it makes a good story. And I question where measured inventory is now — on farms, in processing plants, in manufacturer warehouses, store warehouses or home freezers. Given the vagaries of logistics and the tendencies to hoard up and down the supply chain all the way to the consumer, there are a lot of wild cards here. But I expect all the counterbalancing factors to produce another Thanksgiving like last year’s.

For years there have been comments here about the necessity of upgrading technology to be able to identify where all inventory is at all times. Retailers choosing to ignore this advice as unnecessary means that they cannot identify the exact problem spots in the supply chain at the time of occurrence, so they cannot not make choices to mitigate the problem and communicate more effectively with consumers.

While avoidable, this is not the only source of the problem. The higher price of feed is also an issue. The lesson for retailers is to get that technology in place to know where their inventory is at all times, create contingency plans, and communicate with consumers.

Grocers are being competitive with turkey pricing but investing in margin and in some cases offsetting it by requiring a minimum purchase. This is not new, but the investment is more this year. In my area retailers started putting turkeys in their ads a few weeks ago, so they are encouraging customers to buy early and most are doing that.

There is a lot going through my mind here. I can’t help but wonder if this isn’t an opportunity for grocers to move customers away from the heavily discounted, loss-leader 29 cents per pound bird that’s all over their ads this time of year. Are supply chain woes a smokescreen to move the needle and reset expectations? My friends in the poultry business would tell you that it’s just not profitable to produce birds at those prices. In the Midwest it costs somewhere around $2.25 $2.50 per pound to bring a turkey from chick to market. At some point the market has to change. Now there’s some cover to do so.

Thanksgiving is a pressure point for grocers to hit their revenue targets while optimizing their supply chains. Their stores are full of fresh inventory while providing a good customer experience. The fall harvest and Thanksgiving are when the stores are stocked, and the holiday spirit is in the air. Unfortunately the macroeconomic and supply chain disruptions have impacted all industries, including the grocery industry.

While unfortunate, Turkey shortages represent the types of impacts when there are labor issues, supply chain disruptions, and the value chain is not performing as expected. Perhaps it’s high time to re-imagine what the Thanksgiving dinner could be. Grocers could position and market this as an opportunity to push for alternate main course offerings outside of the traditional turkey. It will take some creativity and innovation to make lemonade out of lemons.

2021’s retail risks have been volatile in the second half of the year. Few grocers would have had the prescient urge to create contingency plans for extra inventory and truckers in early summer.

Labor shortages, supply chain disruptions, the Delta variant and soaring inflation – how could grocers forecast all those shifting factors accurately?

Turkeys aren’t luxury handbags; grocers can’t stockpile them in warehouses ahead of the holidays. Grocery is a complex category and timing matters to protect freshness and quality.

The biggest lesson is the urgent need for efficient, real-time supply chain communications and visibility to minimize gaps and bottlenecks.

We’ll see how this issue resolves itself but, to the degree that there is a disruption, its causes can be tracked to various breakdowns in the supply chain. Bottom line: You can’t sell what you can’t get in stock. As to lessons, I think too many in the retail industry took a very sophisticated supply chain for granted, assuming it could rise to meet any occasion. I don’t think many will make that mistake twice.

“…grocers began sourcing turkeys as early as February to get ahead of the supply chain constraints…” To the extent that this is true — and not just an anomaly — how can we possibly blame the grocers? Indeed, why blame anyone … as many have noted, the Pandemic isn’t over yet (particularly the disruption it has caused).

If shoppers find that some Thanksgiving staples are out of stock or higher priced, their knee-jerk reaction will be to blame the store. That, of course, will be unfair for some grocers. Savvy merchants know all about supply chain issues and surely ordered goods well in advance. Others who didn’t prepare perhaps deserve criticism. However, I suspect that every shopper who wants a turkey will be able to buy a turkey in the store. If a grocer runs out, look out for shopper backlash.

Braintrust
"Grocers may get blamed for Thanksgiving shortages, but it is really a much bigger supply chain issue."

"Are supply chain woes a smokescreen to move the needle and reset expectations?"

"I expect all the counterbalancing factors to produce another Thanksgiving like last year’s."