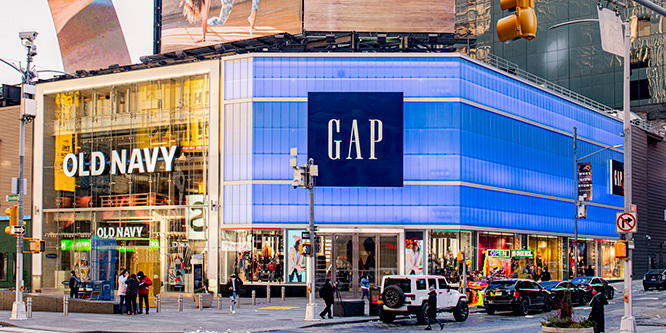 On June 3, a two-story Harry Potter flagship debuted on Broadway, representing one of the biggest store openings in Manhattan in years.

The investment comes as flagships, which significantly depend on tourist traffic, have been squeezed particularly hard by the pandemic and concerns remain about the recovery of major cities.

The value of flagships has often been questioned, with many promoted more for their branding benefits than four-wall profitability.

In March 2020 just before the pandemic’s onset, Gap Inc. announced it was considering closing its “least profitable” flagships, including its Gap and Old Navy stores in Manhattan’s Times Square.

“As we and many of our peers have noted, the marketing value of the historical flagship model has diminished with the continued confluence of channels in the omni-shopping journey, particularly considering the size, location, premium brands and longer lease terms associated with flags,” Teri List-Stoll, Gap’s former CFO, said on a quarterly call at the time.

In December 2020, Abercrombie & Fitch announced it was closing seven flagships that accounted for 10 percent of global square footage but only one percent of revenue. Abercrombie’s CEO Fran Horowitz, said, “Closing flagships is a critical part of our ongoing work to reposition our store network to more intimate omni-enabled stores to better serve our local customer and represent our updated brand positioning.”

Nonetheless, Gibson just announced plans to open its first flagship described as the “Ultimate Guitar Experience” in Nashville. Supreme and Versace have opened flagships in Milan and Gucci just opened one in Seoul. In New York City, flagships debuted last year from Ugg on Fifth Avenue, Major League Baseball on the Avenue of the Americas and Krispy Kreme in Times Square.

“With so many places running away from New York, especially retailers, we want to be part of the re-emergence of New York City,” Krispy Kreme chief marketing officer David Skena, told Advertising Age last August. “We’re betting on New York.”

DISCUSSION QUESTIONS: Have flagships become less worthwhile given pandemic-related challenges and the shift to omnichannel retailing? Where do you see the value in flagships for brands or chains?

Please practice The RetailWire Golden Rule when submitting your comments.
Braintrust
"Flagships are not a thing of the past - the purpose of the flagship is what needs to evolve. "

"With the foot-traffic drought now recovering in most U.S. markets, I see an opportunity for more brand palaces, not fewer..."

"Flagships are like Disneyland – an expensive treat for the family once a year, but not a place you’re going to visit every week."

45 Comments on "Have flagships become obsolete?"

While flagships have their place, and for certain brands it makes great sense, in general I believe the era of flagships is coming to an end. The fact is, retailers need to deliver great customer experiences in all their stores and not just in flagships.

Flagships in big cities have suffered in the pandemic, mainly because foot traffic has dropped as commuters and tourists have visited less frequently. So, to some extent, they will become more relevant as those trends unwind. However flagship stores are only useful if retailers can generate significantly higher (profitable) volume from them or if they help build brand value in some other way. The Gap approach to a flagship was to have a very large store that was basically the same as its smaller stores. What is the point in that? That kind of vanity play will almost certainly come to an end as retailers assess their costs.

Your Gap observation defines the flagship store problem. The flagship store must be a blow-away experience that is even more likely to attract non-brand users than it is those already loyal.

Yes! Why create a bigger version of the same store you’d put in a suburban mall? It makes no sense and, as you say, is unlikely to pull in new shoppers which should be one of the main aims!

Starbucks’ Reserve locations might be an exception, but even then just one per major region (Tokyo, Chicago, Milan, etc.). A nighttime walkaround video I watched from Tokyo during cherry-blossom season this year showed that location buzzing, even with masked patrons.

Flagship stores have one purpose. They are for promoting the brand. Any costs of operating these stores should come out of the advertising and promotion budget and not the operating budget. The measure A&F uses of 10 percent of the square footage and only 1 percent of the sales is entirely the wrong measure. While 10 percent of square footage seems excessive overall, the measure should be the impact on the brand (awareness, preference, positive association), not the sales.

If anything, the flagship stores will be more valuable in the omnichannel world. It will promote the brand for shoppers to go home and buy.

I agree, but then we’re back to the ol’ “measuring results” problem … namely how to do it? Presumably if it — or “they” if you have more than one flagship (though too many hints at another problem) — is under the umbrella of marketing, it would be the same metrics as an ad campaign.

I’ve rarely seen a flagship store post higher profitability than other stores across a brand’s chain and typically retailers have been OK with that due to the brand value it brings. Going forward I see the value of flagships for up and coming brands that are trying to break through a crowded marketplace. The established (and often suffering) brands like Gap and A&F will be focusing more on profitability.

It’s possible that’s because they are thinking about profitability the wrong way.

I always have considered flagships as research and development labs where if you could have everything you want in a store you would put it in a flagship, test it, and roll out components of it to the other stores. I believe they still have a value in that respect.

I think there is a slippery slope between the idea that flagships are dead and the idea that retail is dead. Without question, digital is the new flagship of any brand.

However for new product introduction and creating brand experience, there is nothing in digital to replace an immersive physical experience. Particularly for a brand that wants to create international buzz (high value tourists!).

It is true that flagships should be seen as brand identity, and not measured based on profitability within four walls, or even holistic omnichannel measures. By the same token, the effectiveness of flagships should be compared with similar alternatives – a national brand awareness campaign, a sponsorship, or similar brand marketing initiatives.

No one has precise numbers or even estimates of what flagships do on the positive side for the overall brand. The risk is these types of physical structures become vanity projects that consume precious mindshare and resources.

At one level, it is understandable for physical retailers to have a flagship store. But the trend of online brands opening a flagship is questionable unless the intent is there to make substantial investments in physical retail. Even then, testing in real markets is the practical way, as opposed to opening a store in SoHo.

Flagship stores are worthwhile when they offer something that’s uniquely different from the rest of the stores. Sadly, many don’t. They’re just bigger versions of what you find at your local mall.

It doesn’t get any better than Macy’s Herald Square; the former Marshall Field’s on State Street in Chicago, now a Macy’s, is another good example. Both of these buildings are almost as important as what’s inside – shoppers know they are in a special place. The pandemic hurt these big stores but I am not ready to write them off.

I think it’s significant — and I’m sure Windy Citizens breathed a sigh of relief! — that of the two “downtown” Chicago stores, Macy’s chose to close Water Tower Place. I’m guessing that if you’d been told a decade-and-a-half ago one would go, smart money would have picked State Street.

State Street and Water Tower Place are two completely different stores. Water Tower Place is just a store, a nice one, but still just a store. State Street is an experience. And a legacy that is deeply ingrained in the people of Chicago. We go there to shop, sure, but it’s also where we go to celebrate, eat before and after the theater, and Christmas at State Street is amazing. Macy’s was smart to keep all of the Marshall Field traditions. It’s a true flagship store and a community anchor.

“…two completely different stores.” Indeed: one that’s open and one that isn’t!

But all snark aside, what I meant was that with Macy’s seemingly Hell-bent on commoditizing the shopping experience, logic would have dictated that the survivor would indeed be the “just a store.” Not to mention the costs of running 400K gsf vs. 2M and the relative retail/tourist landscapes of Magic Mile vs. the Loop (though offset by the 500K office workers in the latter).

So my take is that the generic answer didn’t win: I’m delighted … but still surprised.