Has wine in a can moved from fad to trend? 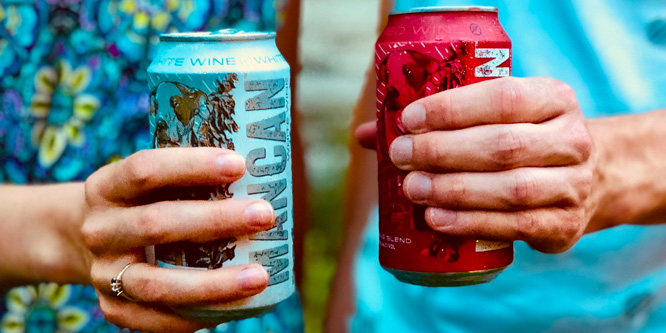 Sales of canned wine grew 43 percent in the U.S. from June 2017 to June 2018, according to BW 166, and a new university study has concluded that what was previously seen as a fad has turned into a bankable trend.

Researchers at the Sigmund Weis School of Business at Susquehanna University in Pennsylvania and at Texas Tech University surveyed consumers and winemakers about their attitudes toward wine in cans. They also compiled a database of more than 450 wine-in-a-can offerings from 130 wineries around the world, finding about half of the varieties measuring 250 milliliters.

A core reason it’s no longer seen as a fad, according to the study, is convenience. Canned wine is suitable for many more occasions than bottled wine, such as boat outings, at the beach or poolside. Hikers and campers buy canned wine to avoid hauling bottles back from campsites.

Consumers also find it cans more convenient, without the need for a corkscrew or glasses. Finally, the can provides single-serve consumption and avoids the need to open a 750-milliliter bottle, a preference for many consumers, waiters, bartenders and cooks.

Other reasons for the appeal of cans:

Robert Williams Jr., assistant professor of marketing at the Sigmund Weis School of Business, told Wine Business, “This time around, wine-in-a-can is not a fad, rather it represents a significant new wine category that is finding a permanent, positive place in the overall wine market.”

DISCUSSION QUESTIONS: Should beverage sellers have confidence that wine in a can has become a strong trend to build on? How might retailers play up the greater convenience offered by cans to market and merchandise the products?

Please practice The RetailWire Golden Rule when submitting your comments.
Braintrust
"There are a lot of compelling, rational reasons to move to single serving cans for wine, but it will be a long education process for consumers. "

"Consumers have shown a strong willingness to try new packaging and product forms as they look for on-the-go solutions to their food and beverage needs."

"People will expect to drink a full can, as if it were a beer. But wine has about twice as much (or more) alcohol. I foresee more of “But officer, I only had one drink!”"

14 Comments on "Has wine in a can moved from fad to trend?"

All signs point to yes, except for the great fun to be had at wineries out in the Napa region! Hard for us Boomers to imagine the Caymus experience ending with a can of Cabernet!

I hope not. Wine in a can is blasphemy. If it goes anywhere, it would be yet another indication of the dumbing down of America

I don’t know if I would consider it a trend yet, as changing consumers perceptions, especially wine drinkers, is a very slow process. A good example of this is the shift from cork to screw tops for wine bottles. The reality is that a screw top preserves the integrity of wine better than corks, but getting consumers to pay for an expensive bottle of wine that has a screw top is still a big challenge.

There are a lot of compelling, rational reasons to move to single serving cans for wine, but it will be a long education process for consumers. Millennials will likely be the first adopters, but it will likely be for lower priced wines or just for situations where a single serving in a disposable container is convenient. I am skeptical that it will take off and if it does, it will take a loooooong time.

So … a trend? Yes. A strong trend? Probably not. Sure, wine in a can may appeal to hikers and other smaller niche segments, but serious wine drinkers aren’t going to give up the rituals of rotating bottles, checking on cork health, temperature control, label flashing, debating vintages, not to mention collecting. And that doesn’t begin to address product degradation issues. Wine is supposed to age, not just get old. So, I’d say it’s like anything else. Stock the products and track demand carefully.

Bob, Tony and I received “Thumbs Downs” on our comments — which I think demonstrates a significant pattern. There are clearly those, obviously including us, that think of wine in its fullest, most traditional role. And, there is at least one RW reader, probably more, who see the functionality offered by cans as trumping all that. Who’s right? The correct answer is probably both sides of the question. But, I want to point to how beverages and food products grow as categories over time. There was a time, decades ago, when most supermarkets stocked one — maybe two soy sauces. And, there was a time when — outside ethnic enclaves — “hot sauce” was limited to Frank’s, Tabasco and maybe a few more brands. Today of course there are stores that sell nothing but hot sauces and the Asian sauce shelves are overflowing with an explosion of SKUs. So, what’s the point? People try something and, if they like it, they start to learn more about it and begin the search for more varied and/or… Read more »
2
|
-1
-   Share

Consumers who prefer wine in casual situations (as opposed to beer) will appreciate wine in cans. Consumers who are serious about wine are not likely to drink wine from a can. These are different target markets drinking wine in different situations. A single serving of wine in a can is likely here to stay because of convenience and the ability to drink wine in situations where it is not convenient to have a corkscrew to use with a glass bottle with multiple servings.

I get the convenience factor, but good wine should be in bottles. As a wine purist drinking wine is a big part of my life, having been in Tuscany and Napa Valley seven times (just got back). Wine in cans will grow with the younger crowd and tailgating parties, but it’s not gonna happen in my circles. If that makes me a snob so be it, but there are traditions going back four generations and my youngest son is now making wine, so I’ll pass.

This is a trend that has been around for a little while now. I do a lot of work in the liquor industry and have seen growth in the plastic bottles, boxed wine and tetra packs. Cans are just an extension of this.
Have you also seen wine and prosecco on tap at your local pub/restaurant lately? It’s another trend to watch.
As a self-professed wine snob, it’s not for me. But then again, there are thousands who think Yellow Tail (a booming success) is a great wine. Good for them. And good for all of us wine snobs to look beyond our own tastes and to the masses.

It’ll gain more share, and might eventually become more than niche. Two observations: 1.) I’d be pouring the can into a glass before drinking, for better taste. (I’ll stay with bottles, but will definitely try this out.) 2.) People will expect to drink a full can, as if it were a beer. But wine has about twice as much (or more) alcohol. I foresee more of “But officer, I only had one drink!”

I think it’s a great trend — and it is a trend because it makes so much sense. Expands options for the wine makers, stores (keep them at the counter) and the convenience of cans helps customers — easier to carry, easier to store.

It also allows packaging to offer the same differentiation that’s happening in beer with the old 24’s now becoming a packaging of choice for higher end beers.

It’s been fun to watch it come onto the scene.

The caution I’ll offer is that “in a can” implies “lesser quality.” That’s not necessarily a problem for daily drink wine — but both wineries and stores need to keep it in mind.

This may or may not be here to stay, but I’m confused as to the focus on SELLERS: isn’t the issue really to be settled at the level of PACKAGING? That is, shouldn’t vintners be the ones promoting this? Retailers will presumably stock whatever sells, but I don’t see any difference for them between stocking shelves with bottles and (six-packs of) cans.

Guess what! CPG success is all about its packaging. This is just another example of selling products in the most appropriate container for its target audience.

I agree with Ryan’s pattern. Since I sent out the database info a month ago, the wineries are up to 225; 565 lines; 24 States; 20 Countries. Four of the top five wine producers are canning (EJGallo, The Wine Group, Constellation and Treasury). It will be interesting to see what happens this harvest. We do see this as additive to bottle sales, primarily due to the factors pointed out in the article and comments. And don’t underestimate the 100% recycle aspect — Millennials and many others love that fact. We found 15-20% savings can over bottle, with one winery stating 40%. Interestingly, the infrastructure is now ramping up, from mobile canners, to installed lines, to contract canners. If you’re interested in more, drop me a line at williamsrl@susqu.edu or LinkedIn. Great article Tom!

Braintrust
"There are a lot of compelling, rational reasons to move to single serving cans for wine, but it will be a long education process for consumers. "

"Consumers have shown a strong willingness to try new packaging and product forms as they look for on-the-go solutions to their food and beverage needs."

"People will expect to drink a full can, as if it were a beer. But wine has about twice as much (or more) alcohol. I foresee more of “But officer, I only had one drink!”"