Has Simone Biles struck marketing gold at the Tokyo Olympics? 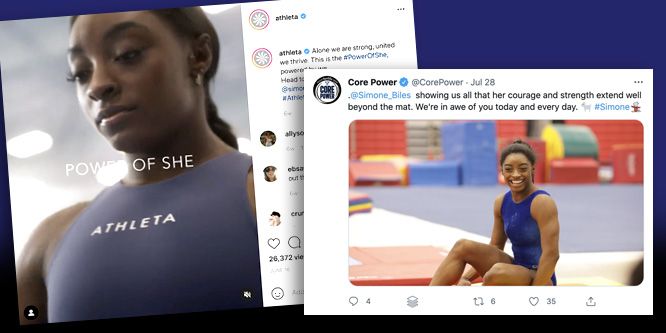 Simone Biles has received an outpouring of support following her decision to put her mental health first and withdraw from the gymnastics team competition during the Tokyo Olympics.

Among sponsors, Visa described America’s most accomplished gymnast’s decision as “incredibly brave” and Nabisco called her an “inspiration to us all.”

“We stand by Simone and support her well-being both in and out of competition,” Athleta said. “Being the best also means knowing how to take care of yourself.”

A few critics have accused Ms. Biles of using her mental health as an excuse for a bad performance and quitting on her team. Sports talk radio shows have debated the message sent to youth.

The 24-year old, who will return for the balance beam final on Tuesday, contends her decisions were made solely based on injury risk. She withdrew from the team finals last Tuesday and has since withdrawn from five individual events.

Tennis star Naomi Osaka likewise drew widespread support when she withdrew from the French Open earlier this year after citing struggles with depression.

Even if sponsors are privately disappointed that victory lap campaigns will likely have to be cancelled, dropping Ms. Biles would likely cause a huge backlash.

“Overall, not having Simone participate in the team competition is not an ideal situation for her marketing partners,” Jim Andrews, CEO of A-Mark Partnership Strategies, told Advertising Age. “However, even if she decides to forego the individual competition as well, she has earned a place in gymnastics history and has proven herself to be an amazing spokesperson and influencer who has much to offer brands even without competing and eventually in retirement.”

Famed sports agent Leigh Steinberg believes much depends on whether her athletic career continues but said being open and honest about her mental health could make her “a very potent athletic spokeswoman for mental health.”

He told FOX Business, “This has been someone who’s been in the public eye for a long time, has a pristine record, and there will be people who think this is her finest moment. Athletic achievement is valuable but helping people deal with life problems is an even greater service and so I think she comes out of this well.”

DISCUSSION QUESTIONS: Will Simone Biles’ decision to withdraw from Olympic competition likely lead most advertisers to augment or downplay her involvement in future campaigns? Do you think this experience will affect other Olympic athletes’ endorsement deals going forward?

Please practice The RetailWire Golden Rule when submitting your comments.
Braintrust
"This is something personal to someone, and I don’t know if turning this into a marketing event is the right thing. "

18 Comments on "Has Simone Biles struck marketing gold at the Tokyo Olympics?"

Simone Biles did a very brave thing when she announced to the world she was withdrawing from Olympic competition – and why. She will open herself up to interesting endorsement and speaking opportunities, giving her a great career opportunity after her life as an Olympian.

I was enjoying the moment when this was actually about mental health, self awareness and self care. The leap to marketing was inevitable, but I hope we don’t lose sight of the really valuable lessons available from this point in time.

It’s commendable to see that top athletes now have the platforms to share their emotional and psychological vulnerabilities. As we watch Simone Biles and so many other great athletes and Olympians, we tend to forget that they are humans and are under such intense scrutiny on the world stage.

Our society has experienced such a traumatic year – plus with the pandemic and all of our collective losses. It’s refreshing to see Simone Biles, Naomi Osaka, Michael Phelps, and other athletes raise the level of awareness around the importance of well-being and mental health.

While the United States and the world would have loved seeing Simone Biles dominate the gymnastics world stage, her courage and conviction will resonate with a generation that appreciates authenticity, transparency, and a focus on wellness. Simone will have plenty of opportunities to share her story, and the ad campaigns will come rolling in soon enough.

Well, no sponsor of Simone Biles can be disappointed with the amount of coverage and attention she has generated! And while she may not have competed in all of the events she was scheduled to, she has brought to the fore issues that are important and worthy. As for her decision, every person has a duty to look after themselves and their health and only the individual concerned can make the judgement call that is right for them. I am glad to see the brands that sponsored her recognize this and support her brave decision.

Smart advertisers will see the power in Simone Biles’ experience and message and augment her involvement going forward.

She might be a great spokesperson for health-related and mental-health related issues. But as a product spokesman, it’s time to retire.

Regardless of what anyone else in Tokyo said to her, Simone Biles took care of herself first. That’s a brave move, and better than anything else she could have done at the Olympics. Her sponsors may have preferred her to compete, but in reality she gave them a tremendous gift: An entirely new market in mental wellness. Let’s hope they follow through.

Athletes can make or break a marketing campaign and what’s important here is that advertisers are authentic in their support.

Supporting athletes as they navigate through the stress and pressure of competing is something we can’t begin to imagine. More advertisers should advocate for athletes and their mental health so the stigma is removed.

I suspect we will see a shift in messaging and approach to campaigns that feature Ms. Biles, but I do expect her market appeal to stay strong. Despite the presence of a few critics, I expect most corporate sponsors will recognize that the strength required to take care of herself under enormous pressure and a glaring spotlight is far more than the strength required on the balance beam.

We live in a strange world. An athlete struggles from the pressure of expectation and onslaught of press, and we are wondering how she has impacted her ad value. I say we leave the woman alone. She’s smart and knows how to take care of her own business, and she’s in way better shape than I’ll ever be. She has a bright future.

This is something personal to someone, and I don’t know if turning this into a marketing event is the right thing. I guess I know it will , but it’s sad that this personal thing will become a new pill and use her as an example of why you need it.

I am extremely impressed by Simone and what she has done. From being an incredible athlete to this action at the Olympics, she has shown herself to be a great example to us always. Now she and her name are pure gold — as it is and as it should be!

Any company who drops her as a spokesman — get ready for the backlash.

Obviously sponsorships were not on her mind at all when making her decision to take a break for her own safety, but it should open up some new opportunities – hopefully more meaningful opportunities – than simply slinging cereal.
Well done Simone, and good luck on the balance beam!

Ms. Biles is immensely popular; I don’t anticipate her leaving the spotlight any time soon.

Honesty! What a unique marketing message.
Be true to yourself. It is not all about the money.

Augment? I’d like to see that concept explained. Anyway, I see this as a one-off event: endorsements always involve risk, this merely demonstrates that.

The Olympics are not so important that participation should come at the expense of one’s mental health, but let’s not go to the opposite extreme and lionize Ms. Biles for what she did. The Olympics are about overcoming adversity, not collapsing under its weight.

There were many other athletes who were ready, willing, and able to go and compete on the world stage. Had Ms. Biles stepped aside before making the team, THAT would have been a true profile in courage. Companies partnering with her then for exhibiting strength in the moment would have been a truly remarkable and honorable achievement.

As it is, this rush to recast failure as success, weakness as strength is a mistake because it ignores the truly exceptional individuals who lost out on a chance to compete as world-class athletes because of Ms. Biles’s choice to accept a spot on the team.

Michael Phelps was going through similar things. He has made it into opportunities and I don’t believe it has backfired on him whatsoever. He did deal with his mental health issues in a different way than Ms. Biles did, but to each their own.

Braintrust
"This is something personal to someone, and I don’t know if turning this into a marketing event is the right thing. "