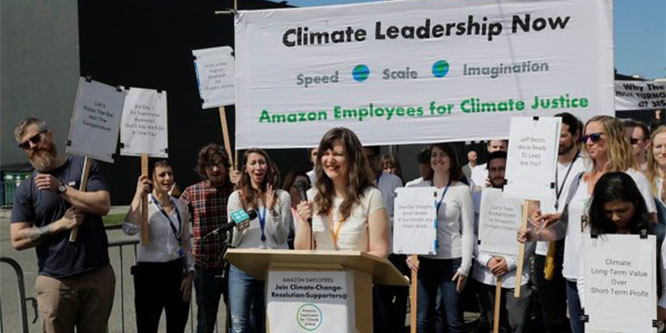 At least two Amazon.com employees who publicly criticized the company’s environmental policies have been warned they could be fired for future violations of its communications policy.

The workers are part of the employee group, Amazon Employees for Climate Justice, that has been pushing the company to more strongly address climate change.

In September, Amazon announced a “climate pledge” that included commitments to renewable energy and carbon neutrality. The pledge was a response to the employee group’s efforts and it arrived one day before 1,500 Amazon employees planned to join a walk-out inspired by Swedish climate activist Greta Thunberg.

The pledge fell short of the employee group’s goals, which included ending Amazon Web Services contracts with oil and gas companies. That led some employees to speak to the media.

News of the job threats that arrived in October were first reported last week by The Washington Post, which is privately owned by Amazon CEO Jeff Bezos.

THREAD/ Jeff Bezos and Amazon executives are threatening to fire a few members of our group after we spoke up about wanting our company to be a leader in the worldwide effort to avert climate catastrophe.https://t.co/L87gpclEyL

The employee group asserts that Amazon’s policy on staff speaking to the press and on social media was only updated in early September, a day after the plan to join the climate walk-out was announced.

Employees now must use an internal system to request PR approval to discuss the company publicly and a “business justification” needs to be provided. Previously, only e-mail approval from a senior vice president was required.

Amazon said it began updating its policy in spring 2019 and it was designed to “make it easier” for employees to participate in media interviews. Amazon also believes its policies are similar to other large companies. “As with any company policy, employees may receive a notification from our HR team if we learn of an instance where a policy is not being followed,” the company said in a statement.

Maren Costa, one of the job-threatened employees, said in response to Amazon’s actions, “Now is a time when we need to have communications policies that let us speak honestly about our company’s role in the climate crisis. This is not the time to shoot the messengers.”

DISCUSSION QUESTIONS: Are Amazon’s updated public communication guidelines appropriate? What effect, if any, do you expect this to have on employee morale?

Please practice The RetailWire Golden Rule when submitting your comments.
Braintrust
"I don’t think there’s anything Amazon can do about it, any more than Walmart was able to stop its workers from complaining about its policies."

"I imagine the only way of getting traction here is by raising public awareness."

"It’s a very fair request in any public company. It’s also not likely to be overly effective given the sheer number of people who work at Amazon."

Amazon is well within their rights to set communication guidelines for employees as they see fit. While the new guidelines may feel too restrictive for some employees, I doubt that it will have any significant impact on overall employee morale. That said, there does seem to be an increasing frequency of employee-led actions that conflict with corporate positions – like the Google global employee walk-out in 2019. While the employer will always have ultimate leverage over employees, this is becoming a much more challenging issue to manage.

People are entitled to hold views and to speak generally about any issue that they wish. However, I don’t think it is unreasonable for companies to ask employees to seek permission when they are specifically speaking in a public forum about the firm that they work for. This is a pretty standard policy. Of course, Amazon should be listening to its employees and employee groups and by doing so it will learn and grow and will increase loyalty among its staff.

It is not unusual for a large company to have public communication guidelines. When I went from working for an entrepreneurial company to a major oil company one of the things I was instructed on while on-boarding was their policy regarding the press. I was instructed to send all press inquires to the public relations department or get permission from the vice president to speak to the press. Amazon employees may not like the new rules but the company has a right to set the guidelines.

I think the question should be “What companies do not have communication guidelines like these?”

Company policies directing how and when employees may speak with the press aren’t new, and are wholly appropriate. But it’s also naive of Amazon to believe that a policy will change the outcome now that the first shots have been fired. Instead of arguing about the rules, the company – given its high level of exposure – needs to proactively engage. Trying to stop the dialogue will only increase its power and reach.

Welcome to the other side of the PR machine world, Amazon!

I don’t think there’s anything Amazon can do about it, any more than Walmart was able to stop its workers from complaining about its policies.

All they’ll do is drive anonymity, but they really can’t dictate what people do on their own time, and the worst blowback will come if they fire the workers. First of all, this level of job is just not so hard to get, and second of all, last I checked it was still a free country.

Amazon is certainly entitled to enforce public communications policies. Unfortunately, governments and businesses have dragged their collective feet for so long that climate change has become a global crisis/catastrophe. In that light, it’s going to be difficult to muzzle workers who care about their future, and that of generations to come.

A company or an individual will never learn how to change for the better when people just tell me what I want to hear and what they are doing right. When we listen and talk to people who look at things differently we can learn and grow.

Yes companies need policy on what employees can do. But to stifle conversation about what might make them better is a mistake.

It’s a very fair request in any public company. It’s also not likely to be overly effective given the sheer number of people who work at Amazon. But Amazon is totally within the bounds of reasonable to ask this.

As everyone has pointed out, Amazon’s position on communication guidelines for employees is valid. That said, Amazon’s activist employees have likely found that communicating their stance internally falls on deaf ears. I imagine the only way of getting traction here is by raising public awareness.

Braintrust
"I don’t think there’s anything Amazon can do about it, any more than Walmart was able to stop its workers from complaining about its policies."

"I imagine the only way of getting traction here is by raising public awareness."

"It’s a very fair request in any public company. It’s also not likely to be overly effective given the sheer number of people who work at Amazon."