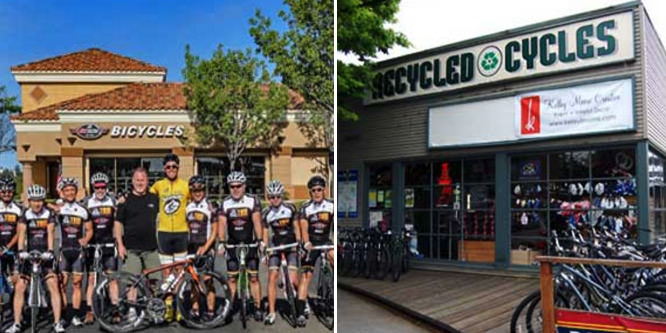 Inspired by the success of the “Got Milk?” campaign, a group of independent bicycle dealers (IBDs) are banding together to launch an advocacy campaign to encourage people to bike.

The campaign (which is not using the phrase “Got Cycling?) would be designed to arrest the sharp decline in cycling in recent years.

The group, called the 20 Collective, features 20 local cycling shops representing five percent of IBD sales and is looking to create an “industry advancement fund” to support the initiative. But the collective is looking for support from bike vendors and larger bike sellers such as REI and Walmart in a broader effort to bring non-bikers to the sport. The group said the efforts of many cycling advocacy groups largely reach only frequent cyclists.

The goal of the effort is to establish “one cohesive marketing effort for the ENTIRE cycling industry focused on increasing participation. Much like the dairy, beef, R.V., and fishing industries do for their own. They have each launched campaigns like ‘Go RVing,’ and ‘Beef, its what’s for dinner,’ investing in growing participation and awareness of their industry. We must do the same.”

To fund the campaign, the group is exploring establishing an excise tax on sales of bicycle products. A 0.5 percent tax would bring in about $30 million per year.

The tax is designed to avoid hurting any funding targeted for existing cycling advocacy efforts and also eliminates the “free rider” effect, or companies or retailers benefiting that don’t participate in the program.

Scott Helvie, 20 Collective’s treasurer and COO of Bicycle Garage Indy in Indiana, told Bicycle Retailer, “Our end goal is to put more people on bicycles and to talk to 99 percent of the population that doesn’t buy a bike at specialty retail.”

Discussion Questions: Do “Got Milk?”-like advocacy campaigns make sense for niche retail sectors? Do you see a more effective way for independent like-minded shops to collaborate to expand their collective businesses?

Please practice The RetailWire Golden Rule when submitting your comments.
Braintrust
"The success of this campaign will depend on how well the organizers identify the root cause of cycling’s alleged decline over recent past."

"Results count … everything else is conversation."

"As an avid cyclist, I can tell you why cycling has declined: it’s hard to ride anywhere safely!"

There would seem to be a big difference between milk and beef versus a specialty bicycle. Milk and beef are staples purchased multiple times a year, where as specialty bikes might be a once-in-a-lifetime purchase.

The real question might be, how do you reach today’s omnichannel consumers for a bike advocacy campaign when they are “in the moment” to consider a purchase? There is no description of the media strategy … but social would seem to be a huge play with biking and health benefits.

Results count … everything else is conversation. The bottom line is that this should all be very testable on micro-sites, blogs, social media and even traditional media in local markets.

I would hope this program also helps fund the costs and marketing of distributing used bikes to agencies serving underprivileged youth. One of the strongest marketing messages the collective could mount is: Turn in your dusty old bike and we’ll refresh it and put it in the hands of young people to help counter youth obesity, and give young people more mobility in their neighborhoods.

The idea of specialty retailers banding together to generate interest in their focus area makes sense. In the case of the cycling industry, the success of this campaign will depend on how well the organizers identify the root cause of cycling’s alleged decline over recent past. For example, the number one issue that holds many back from getting on a bike is safety. The number of bicycle deaths in the State of Florida have spiked over the past two years and motorists too often get away without taking full responsibility for running over cyclists while under the influence — of a substance or just a mobile phone. Statistics are similar in other states. Let’s see what transpires in the aftermath of the recent Kalamazoo incident. All of this is a way to say that the group should focus on fun and getting the wind in the face of the consumer, but should also embrace a practical approach to helping the average person feel safer on two wheels. That might open up another season of bicycle… Read more »
1
|
0
-   Share

This sound more to me like someone trying to create make-work jobs and pay themselves from fees and taxes raised. The retailers can do this without creating a make-work advocacy group.

I’m so glad they aren’t trying to copy “Got Milk?” as copycats never get the bounce the original did. I think it is great to be proactive. Bike manufacturers have a program called PeopleForBikes. The industry’s major players put a percentage of sales to support local advocacy, build appealing facilities and promote cycling. They’ve spent over $30 million spent to make bicycling better. Anything that can help them promote more of a disconnected world on what has been called the most energy-efficient machine seems good.

I would add, as a 50-plus guy, biking just represented work to me until I discovered a Pedago electric bike which can assist when you want to. Such bikes are at the forefront for Boomers who don’t want to be left too far away to get home. I enjoy the ride again.

Record Store Day has drummed up interest in independent stores since it first debuted in 2008. Who is to say a similar approach wouldn’t help shift independent bicycle dealer sales into a higher gear? (Sorry, couldn’t stop myself — ;o))

Stores also need to rethink their businesses to meet the consumer demand for experiences (stationary cycling classes come immediately to mind). Younger consumers, in particular, don’t just see Warby Parker as a place to buy glasses, but also somewhere they can hang out. There is a good article currently on Fast Company that offers a look at a new breed of merchants that emphasize customer experiences that lead to sales.

I am surprised to hear that the numbers for bicycling are down. A few big cities have had pushes and initiatives over the last few years to make the streets more bike-able, and bike share kiosks appear regularly throughout Chicago and NYC (though perhaps the advent of bike shares has led to a corresponding decrease in casual riders buying their own bikes). The amount of bike riding and the demographics of people riding bikes would seem to vary drastically from location to location. And as Bill Hanifin mentioned, the safety concerns may stop people from biking, and I wonder if trends in parenting have not led to fewer kids riding bikes, even as more adults in cities bike as part of their commute.

So perhaps a couple different advertising campaigns, targeted to parents about bike safety, to suburban or rural audiences about mountain biking and to city-based commuters and so on, would have more traction than a single push or slogan. Get industry-wide support, but localize the message.

As an avid cyclist, I can tell you why cycling has declined: it’s hard to ride anywhere safely! Fundamentals like lack of infrastructural support — bike lanes, places to park, safety signage, laws supporting cyclists (people are constantly clocking cyclists and walking scot free) just to name a few. Bikes are also expensive as hell now that so many new (fab!) materials have been introduced, but that’s secondary in my opinion to the danger factor. Look at New York. All the above has happened there in earnest and more people than ever are riding (Citi Bikes help too). Also Copenhagen, I mean, I don’t need to say anything about that cycle heaven, but there’s a lot to learn from the Danish.

So to me, the campaign idea is a good one, but until that same energy is put into lobbying local governments to increase safety and awareness and to implement stricter laws about nailing cyclists, it won’t change much.

Braintrust
"The success of this campaign will depend on how well the organizers identify the root cause of cycling’s alleged decline over recent past."

"Results count … everything else is conversation."

"As an avid cyclist, I can tell you why cycling has declined: it’s hard to ride anywhere safely!"