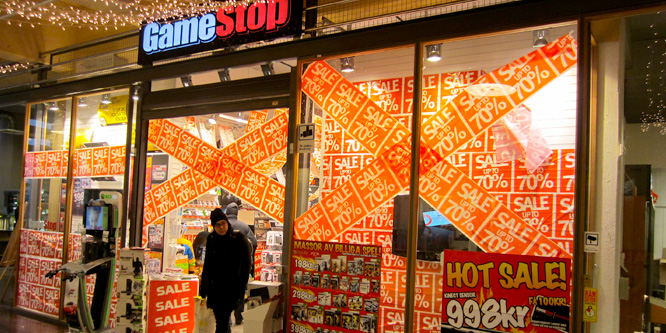 GameStop, which has mostly made headlines in recent weeks when investors drove the struggling video game retailer’s stock higher to hurt hedge funds that were betting on its demise, isn’t ready to give up on itself yet as evidenced by new hires with strong professional pedigrees.

Matt Francis has been named to the newly-created position of Chief Technology Officer at GameStop. Mr. Francis, who will start on Feb. 15, brings with him more than two decades of experience working in e-commerce and consumer technology. Most recently, he was engineering lead at Amazon Web Services (AWS). Before that he worked in senior technology positions at QVC and Zulily. He will be responsible for overseeing all e-commerce and technology functions at GameStop.

Ms. Durkin previously worked as vice president of customer service at Chewy, the pet retailer known for its personal approach to serving its loyal customers. She will be responsible for all customer engagement and service initiatives in her new role.

Mr. Kreuger has worked in senior fulfillment positions at Amazon, Walmart and QVC. His role at GameStop will be to oversee the management of the retailer’s e-fulfillment centers.

The recent hires appear to be the handiwork of board member and activist investor Ryan Cohen. Mr. Cohen, who co-founded Chewy, has been encouraging GameStop’s leadership to focus on digital sales and become a company that “delights gamers and delivers exceptional digital experiences” rather than one that “concentrates on its brick-and-mortar footprint and [stumbling] around in the online ecosystem.”

GameStop has seen its stock go on a rollercoaster ride, its share price going from under $20 on Jan. 20 to as high as $483 on Jan. 28. The retailer’s stock closed up 2.41 percent yesterday at $92.41 on news of its executive hires. Premarket trading in GameStop saw its shares rise to $93.94.

GameStop, which has not yet announced the full results for its fourth quarter, did release worldwide numbers for the first nine weeks that showed comps up 4.8 percent and digital up 309 percent.  The chain’s store count fell by 11 percent during the period, contributing to an overall year-over-year decline of 3.1 percent.

DISCUSSION QUESTIONS: Are you encouraged about GameStop’s prospects based on its apparent change in its strategic focus and new additions to its board and leadership team? What impact do you think its new hires are likely to have on GameStop’s in-store business as well as its digital ops?

Please practice The RetailWire Golden Rule when submitting your comments.
Braintrust
"Gamestop’s fundamentals are weak – it doesn’t matter who is in charge. "

"If there is a path to survival, it’s going to require a massive amount of capital and complete restructuring of their operational model."

"It will be intriguing to see how GameStop and their new leadership team influx can help drive change and help return the company to profitability."

12 Comments on "GameStop hires Amazon, Chewy and QVC vets to transform its business"

These are good hires, but I wonder if it’s too little, too late? Notwithstanding their recent stock market madness, GameStop has struggled to evolve and the threat of online gaming remains. GameStop faces industry structural issues which will be difficult if not impossible to overcome without a complete overhaul to their strategy. It will be very interesting to see what impact the new leaders bring to the organization, but it’s still very much an uphill battle.

Mark, I agree with you 100 percent. GameStop should have made these hires some time ago and the question is, why did they wait so long? This will be a long road and I hope they will be successful in revamping their business model.

The push to digital is eminently sensible and there is more of a future here than in the network of GameStop stores. However my concern is that much like music consumption today, the future of games is intangible: you don’t need a physical product, just code which can be downloaded direct to devices. In this world, where does GameStop fit it? Games makers, console brands and smartphone companies can create their own platforms for downloading content. Sure, sales of physical consoles will still be relevant, but I don’t think this is enough of a differentiator and credible business model for long-term survival.

That industry veterans are signing up is a good sign. I believe GameStop has a strong community and focused niche to make it successful. It has not overextended itself in terms of store sizes. Also, there is probably no other player in a similar space with national name recognition. I am cautiously optimistic.

Gamestop’s fundamentals are weak – it doesn’t matter who is in charge. Stick a fork in them – their day has come and gone. The only reasons we hear about them is that the masses decided to mess with the hedge funds.

Anecdotally, three of my grandchildren are heavy into gaming. One of them even enhances his spending money with his winnings. To paraphrase their responses when I ask them about GameStop, “why would I go there? I get everything I need online.”

If GameStop was not in the headlines this past week, would we even be talking about it? And if we did, would we not be writing obituaries?

The business model for gaming has so fundamentally changed that I have difficulty seeing a future for GameStop. The content providers in this space don’t need a retailer to sell their products. Worse, their customers don’t want a third party between themselves and the providers. If there is a path to survival, it’s going to require a massive amount of capital and complete restructuring of their operational model. I don’t think that kind of investment makes sense for this brand.

It’s a good move to hire all these experienced and accomplished leaders but the main issue is GameStop’s redundant business model itself. It will be interesting to see this unfold in the near future.

GameStop is taking the crucial steps to drive a meaningful transformation. However customer behaviors have evolved significantly over the past 10 years, to create a landscape where a digital-first strategy wins in the gaming world. Their business model of leading with a physical retail strategy is outdated, and their core customer gamers have navigated to digital channels for all their gaming needs.

While these leadership hires are a step in the right direction it may, unfortunately, be a classic case of too little too late. Blockbuster sadly is the prime example of a company that held onto their legacy strategies far too long, as the world and their loyal fan base’s behaviors shifted to digital streaming options.

It will be intriguing to see how GameStop and their new leadership team influx can help drive change and help return the company to profitability.

If Gamestop manages to really pivot – it will be the blueprint for so, so, so many (primarily mall) brick-and-mortar stores. The wave of gaming will only continue to grow. This could be a “game” changer!

Recent headlines notwithstanding, GameStop’s business model requires a complete reimagining if the the company hopes to remain relevant. A shift to digital is likely a core aspect of this. New leadership might help — if they have the mandate and the courage to take dramatic action.

It’s really all about digital at this point. I haven’t set foot in a GameStop since my kids used the Wii. All the games they play are either downloaded or playable online now. I use an Oculus VR rig … nothing but the headset needed in terms of physical assets as all the games download right to the headset. This is the future and anything else is “game over”!

Braintrust
"Gamestop’s fundamentals are weak – it doesn’t matter who is in charge. "

"If there is a path to survival, it’s going to require a massive amount of capital and complete restructuring of their operational model."

"It will be intriguing to see how GameStop and their new leadership team influx can help drive change and help return the company to profitability."