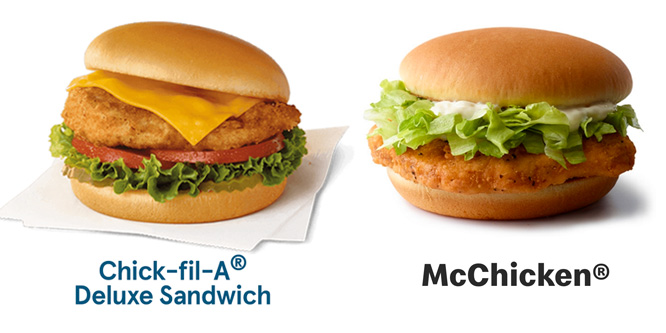 McDonald’s franchisees across the country think they have an idea to keep Chick-fil-A from eating their lunch. They want a chicken sandwich that’s just like their rival’s.

An email sent out to members of the National Owners Association (NOA), a group of franchisees formed last year, argued that McDonald’s current chicken menu options are not a sufficient answer to the competitive threat posed by Chick-fil-A and its popular southern style sandwich.

Franchisees argue that Chick-fil-A’s premium sandwich offering has taken sales and share from McDonald’s in the southeastern U.S. and the chicken chain’s expansion to other parts of the country poses a significant competitive threat.

“A Chicken Sandwich at McDonald’s should be our top priority,” the NOA board’s email said, according to TheStreet. “JFK called for a man on the moon; our call should be a category leading chicken sandwich.”

Chick-Fil-A has developed a cult-like following, known for fans loyal enough to camp out overnight for new restaurant opening and wearing cow costumes to get free entrées during the chain’s annual Cow Appreciation Day promotion.

The chicken chain ranked first for customer satisfaction among fast food restaurants with a score of 86 based on a scale of 100, according to the American Customer Satisfaction Index. In contrast, McDonald’s was at the bottom of the rankings with a score of 69.

DISCUSSION QUESTIONS: Do you think McDonald’s needs to develop its own premium chicken sandwich to head off market share losses to Chick-fil-A? Will Chick-fil-A be able to maintain its following of fans as it becomes more ubiquitous across the U.S.?

Please practice The RetailWire Golden Rule when submitting your comments.
Braintrust
"Franchisers should always listen to their franchise partners as those owners see the customers."

"The chicken, I suspect, can be cloned. The politics, not so much."

"McDonald’s should not be in a position of chasing rivals. They have the location advantage over all other fast food merchants."

Chick-fil-A is not a new threat to McDonald’s, which explains why McD’s added a couple of “premium” grilled and crispy chicken sandwiches to their menu a few years ago. The next step for McDonald’s is to ensure that their product actually stands up to Chick-fil-A quality. “Freshly made” has turned into a winning strategy for the Quarter Pounder (a huge sales increase since converting from frozen patties).

McDonald’s still has a huge location advantage over Chick-fil-A, but the breadth of its menu (compared to a single offering like chicken) adds to the complexity of its operations. Many of us have stories about absurdly slow service inside a McDonald’s or at its drive-thru window. What was always a competitive edge for Mickey D’s has turned into a liability, along with the perception that its food is less than the best.

Franchisers should always listen to their franchise partners as those owners see the customers.

Aside from the menu items, the big difference between McDonald’s and Chick-fil-A is the attitude of the people who work there. You’d be hard pressed to find a surly associate at Chick-fil-A. That’s part of its charm.

Back to the question. If McDonald’s franchisees want a chicken sandwich to rival the sandwiches served at Chick-fil-A then McDonald’s corporate should give them one. Listen to your customers, they’re smarter than you.

You are right about Chick-fil-A employees, Georganne. We don’t go there often but the first time we asked for recommendations since we were new to the menu, you’d think we were long-lost relatives suddenly returning home. As first-timers, our lunch was free and at least three times we were asked if everything was okay and could they get us anything else. I find the same attitude at Raising Cane’s Chicken Fingers that I praised in my post today.

I haven’t been to a Raising Cane yet, but now I want to go!

I think there is another factor at play as well, call it Chick-fil-A’s “cultural” positioning.

Like them or not, Chick-fil-A has made its religious and political stances really clear — fairly unusual in a scaled foodservice player. The result is that one can be a Chick-fil-A fanatic, without caring whether or not the chicken is crispy enough. For some of its customers, supporting Chick-fil-A is supporting a very specific vision of American life as much as it is about buying lunch.

The chicken, I suspect, can be cloned. The politics, not so much.

Insightful, my friend. Another way to put your “politics” observation is that it’s the STORY. McDonald’s has lost the power of the story. As I mentioned in my piece today, in Raising Cane’s Chicken Fingers locations you simply cannot miss the story. It’s on the walls and other signage and any staff member will tell it to you if you show interest.

McDonald’s should not be in a position of chasing rivals. They have the location advantage over all other fast food merchants. But it seems to me that McDonald’s lost its advantage over the hamburger to rivals like Five Guys, Shake Shack, Smashburger and Carl’s Jr. They should fix that problem first.

Chick-fil-A is a chicken fast food merchant and they should be better at chicken. But it seems that customers are going there for more than just chicken as they seem to excel at service. They also excel at speed during busy times. They actually bring their order takers out into the line to move the customers through faster.

So, is it the chicken sandwich that is the issue or is Chick-fil-A just a better operator? I think McDonald’s should look past the food offering to find the real reason people are going to Chick-fil-A.

Among the competitors, I’ll put in a plug for fast-growing Culver’s. I’m biased, because I live in the land of frozen custard and fried cheese curds, but their food offerings (both burgers and chicken) and service levels beat just about anyone out there.

From Minnesota, the quality of food at Culver’s is outstanding, the service is friendly, and the locations get great traffic at all parts of the day. Lots of variety on the menu and lots of customization for both food and dessert – which goes against some of the advice here. The wait can get long, despite being well-staffed – they’ll have between four and eight cars stacked up past the drive-thru window at lunch and dinner time and you should expect a 10-minute wait. Yet customers keep showing up despite that also being a customer service sin…

Chick-fil-A is not just a excellent provider of premium chicken sandwiches, it has established a culture around its products. McDonald’s has a much larger menu complicating cooking and delivery to customers. They also have a lower price point than Chick-fil-A. Adding a premium chicken sandwich would complicate both issues, price and menu breadth and not create enough value to attract Chick-fil-A customers to McDonald’s.

Chick-fil-A will be able to maintain its following as it expands as it has a premium and well liked product. People in the parts of the country which have not experienced Chick-fil-A will support the new restaurants with its quality chicken sandwiches.

If the franchisees are truly representing the voice of the customers, the McD’s organization should get chefs moving! They could even try to one-up Chick-fil-A with tasting events to get the customers involved. No excuses! Grow with the customer’s taste preferences or lose share…

The annual ranking of fast food chains was just published. With over 20,000 respondents, Chick-fil-A ranked #1. McDonald’s was last.

If this is the franchisees’ answer to their problems, McD’s better not listen to them.

I love this; we all feel it’s a good idea for McD’s to listen to the field and answer with action. This reminds me of the competition telling another competitor what they should do. It becomes a chase. So McDonald’s should pursue the sandwich, but also concentrate on the pleasant environment and staff attitudes and performance at Chick-fil-A. Remember, market share is not just the sandwich, it’s the whole experience!

Executing a “me too” maneuver is not going to take market share back from a competitor with a cult-like following. Having said that, of course McDonald’s should listen to the franchisees and their observations on the competitive profile of the market. I could say do the fries just like Five Guys, but it’s a lot more complicated than tweaking a couple of menu items. At the end of the day, make all the necessary evolutionary moves.

Since we’re talking about chicken…

Raising Cane’s Chicken Fingers is light years ahead of both Chick-fil-A and McDonald’s. In addition to the quality of its chicken, Raising Cane’s has created its own lane by focusing in on a single food item – chicken fingers. And yes you can have them in a bun, but it’s chicken fingers. Oh, and the best lemonade on the planet.

I’m told that founder Todd Graves described this single item strategy in a paper he wrote in business school only to receive a failing grade from a professor who said it would never work. I believe the company owns most if not all of its locations. “Cane” was the name of Graves’ dog. What I know is that Cane’s is the only fast food place my wife and I have made a destination.

Of course McDonald’s should have a good chicken sandwich — but it should be McDonald’s.

The chicken sandwich is not why Chick-fil-A is eating McDonald’s lunch.
It’s that McDonald’s is a process- and product-driven experience versus a customer-centric customer experience.

They have to change more than their product to win this fight.

Listen to your franchisees, they are listening to the market. I have compared both sandwiches and Chick-fil-A wins hands down.

McD’s faces threats on all the “premium sandwich” fronts — think “5 Guys” et al — so I’m not sure about the logic of focusing on their chicken one specifically. Of course, another way of looking at it is “solve” chicken first, which is presumably the lesser part of their equation, and the solution can also be applied to the burger problem. But I’m not sure such a remedy exists. Like it or not, McD’s has a formula — low skill, (ultra) low cost, high standardization — that can’t just be abandoned. Can it be tweaked … enough? We’ll see.

The key lesson is Chick-fil-A developed a powerful niche, understands it and sticks with it. The service is outstanding, but the quality of the sandwich is what brings customers back. What puzzles me is why they opened a Chick-fil-A in the new football stadium in Atlanta for Falcons games. Most Falcon games are played on Sundays, but Chick-fil-A is CLOSED on Sundays.

Braintrust
"Franchisers should always listen to their franchise partners as those owners see the customers."

"The chicken, I suspect, can be cloned. The politics, not so much."

"McDonald’s should not be in a position of chasing rivals. They have the location advantage over all other fast food merchants."