Forget football, the Super Bowl is all about the food! 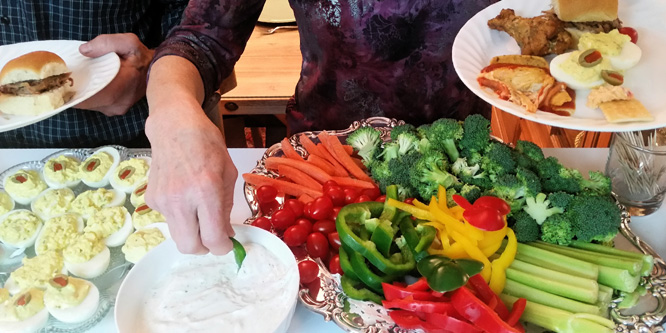 According to the National Retail Federation’s (NRF) annual survey, consumers are expected to spend a record $17.2 billion at retail for the Super Bowl. Much of that will be spent on food.

Of respondents to NRF’s survey, 76 percent intended to watch the game, 19 percent planned to throw a party and 27 percent had plans to attend a party. Among those watching, 80 percent planned to buy food and beverages, well above the second-planned purchase, apparel and accessories, at 11 percent.

A number of other surveys likewise showed food to be integral to the event:

For grocers looking to tap the game day opportunity, in-store digital coupons, social media posts, sampling, recipe cards, game-related displays and cross-merchandising all play a role in maximizing sales, according to an article from Produce Retailer.

Stepping up around the Super Bowl is H-E-B, which launched a sweepstakes to win a lifetime of free groceries tied to its Super Bowl ad starring actress Eva Longoria. The commercial will air in more than a dozen Texas markets. Another contest gaining attention is from Buffalo Wild Wings, which is offering free wings to everyone in the U.S. and Canada if the Super Bowl goes into overtime.

DISCUSSION QUESTIONS: Does the focus on food for the Super Bowl give grocers the opportunity to capture sales in other categories connected to the game? What are the most effective ways for food retailers to reach Super Bowl consumers?

Please practice The RetailWire Golden Rule when submitting your comments.
Braintrust
"There’s a football game? Grocers are the perennial Super Bowl winners because the game is all about the food. "

"Go to Costco this week and see how they flex the space for the Super Bowl (or any other event/mindset)."

"When I was running a disposable plate business back in the ’70s, the Super Bowl was our biggest promotion. Yes, bigger than the summer holidays."

12 Comments on "Forget football, the Super Bowl is all about the food!"

Beyond the obvious grocery categories (snack foods, deli trays, bakery, liquor), there is plenty of opportunity for food retailers to sell party supplies and paper goods. But if you’re not in a market with a rooting interest in the two teams, there is less chance to sell team apparel and merchandise.

It’s surprising, given the natural surge of purchases that may be second only to Thanksgiving, that grocers aren’t more aggressive with in-store promotions, online coupons, emails, texts and tweets. H-E-B sounds like it figured this out but it doesn’t seem to have enough company among other food retailers.

Food is the ingredient that binds us together. I’m fortunate to live in a region served by H-E-B and in addition to the innovation of their advertising, they also
employ one of the most effective ways to capture sales in other categories connected to the game — they offer in-store package deals. Buy one item of greater value and the store gives you the entire themed bundle for free (Example: Buy a small crock pot for $12.99 and you receive H-E-B cheese and tomatoes to make queso dip). Through these bundles my family has been exposed to many items we would not have normally purchased and we’ve returned to buy them again.

It is about the food! Doritos, Pepsi, H-E-B, etc. all up their game during the Super Bowl. Many grocers tie in the product very successfully in their stores. H-E-B more than any other retailer ties their private labels (which are very good) into their Super Bowl promotions both online and in-store.

There’s a football game? Grocers are the perennial Super Bowl winners because the game is all about the food. Absolutely, grocers can boost sales with Super Bowl-themed campaigns that should be top-of-mind this week.

It’s probably sacrilegious to say that not everyone cares about football, but it’s true so Super Bowl Sunday gives all sorts of retailers the opportunity to host events that day. It’s a in-store event day no-brainer.

Leading up to the Super Bowl is when grocers can really shine. Reaching consumers on the sales floor in the days leading up to the Super Bowl is critical, it’s where cross-merchandising and well-placed merchandise outposts are particularly effective. Displays that feature new ideas and food combinations stop traffic. Add in strong signage and a person to offer a taste or demo a technique. Grocers that make it easy for home party planners are golden, it’s that kind of connection that brings shoppers back for more.

Go to Costco this week and see how they flex the space for the Super Bowl (or any other event/mindset). Televisions get added space. There’s an extra aisle of alcohol at the expense of produce. Appetizers get more freezer space. You’ll also see an expanded offer of tables and chairs. Costco’s featured deals and hot buys this week also have more food offerings than typical. Even consumers that don’t throw Super Bowl parties still seem to do something extra that day from a food perspective. Consumers are ready to buy, they just need reminders and inspiration.

The focus on food for the Super Bowl (oops, I meant to say Big Game) and occasion-based shopper marketing programs – such as those featuring parties – serve to remind shoppers to buy across the store. Integrated programs (digital and in-store) reinforce the need to buy and help shoppers remember what they might otherwise forget. Offering tips throughout the shopping journey (plates, cups, napkins, decor, ice, etc.) can increase the urgency of purchase.

Of course it is all about food and has been for over 40 years. When I was running a disposable plate business back in the ’70s, the Super Bowl was our biggest promotion. Yes, bigger than the summer holidays.

Today I don’t go to Super Bowl parties. I want to watch the game. By the way, I don’t believe the statistics quoted. I think it’s more the other way around, at least in reality. At those parties, almost no one watches the game.

So Mr. Grocer, get out your displays, promotions and decorations. Here is a huge opportunity. But something tells me you already know that.

Over the past fifty years, there has been no limit to the food opportunity connected to the Super Bowl. This year is no exception, with the leveraging of social influencers, direct messaging/texts, other personalized marketing, as well as brick-and-mortar POP displays and tie-ins.

Grocers (and CPGs) have long recognized the impact of the Super Bowl on their annual business — it’s effectively a holiday, not just a one day sporting event. In-store displays and weekly ads have been built around this “holiday” for decades in grocery. We’ve all seen very creative displays (typically designed and built by DSD suppliers) in our local grocery stores.

However, I would argue that grocers have not capitalized effectively on digital channels at all (e.g. search, mobile, social) with creative ads, placements, buzz, etc. This is where other consumer brands (fashion, apparel, general merchandise) simply outperform grocers today. There’s still plenty of upside.

It’s more than food. It’s plates, cups, etc. Retailers already sell it, but it needs to be merchandised differently for special occasions, such as the Super Bowl. This is a layup for the retailer. (OOPS! Wrong sport!) Seriously, the retailer that doesn’t take advantage of the Super Bowl probably is missing other opportunities like Thanksgiving, July 4th, Easter, etc. Take advantage of all holidays and special events to extend the typical grocery experience into a themed experience.

Yes! In addition to selling food, grocers can also sell (and introduce) football themed products, jerseys, hats, balls, etc. All things football and super bowl specific can sell for a grocer both before and after the game. This also ties into all super bowl marketed items from major sponsors in their stores (food, HBC, drinks, snacks, etc.) The super bowl is a huge win for everyone who participates, and any grocer who wants to take advantage of this, should….

Braintrust
"There’s a football game? Grocers are the perennial Super Bowl winners because the game is all about the food. "

"Go to Costco this week and see how they flex the space for the Super Bowl (or any other event/mindset)."

"When I was running a disposable plate business back in the ’70s, the Super Bowl was our biggest promotion. Yes, bigger than the summer holidays."