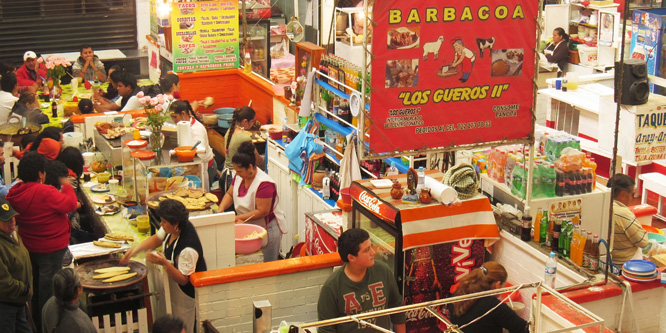 The fastest-growing population in the country over the next forty years will be Hispanic, according to the U.S. Census Bureau. There are already 75 million residents of Hispanic heritage — one in five people in the U.S. Hispanics are great food consumers, buying about five percent more than the average shopper, and they are becoming more mobile and digitally proficient, with 95 percent owning smartphones.

All of this adds up to a huge opportunity for supermarkets, according to a panel at FMI’s Midwinter Conference. This opportunity requires discipline to understand the unique buying behaviors of the Hispanic consumer and is not without risk for retailers. The reward, according to Mark Baum, chief collaboration officer & senior vice president, Industry Relations at FMI, and moderator of the panel, is well worth the effort for any operator with a potential Hispanic shopper base.

“Hispanic shoppers’ buying power is expected to be $24 billion by 2025,” said Mr. Baum. “With larger households that often include older adult relatives, Hispanic families’ weekly grocery spend is about $20 above average; they favor supermarkets as their primary store.”

Understanding the differences among Hispanic subcultures is critically important to successfully entering into or expanding marketing efforts to the sector, said Oscar Gonzalez, co-president, Northgate Gonzalez Market, a 41-store chain in California. “Mexicans don’t want to be treated like Salvadorans, and Salvadorans don’t want to be treated like Mexicans,” he said.

Both Mr. Gonzalez and Omar G. Jorge Peña, chairman of Aurora Grocery Group, a 24-store chain operating in five eastern states, agree that authenticity is also crucial for success. “Hispanic shoppers can quickly figure out if a retailer is faking it. They want the real thing, and that doesn’t mean just one store associate who speaks Spanish,” said Jorge Peña. Retailers also need to show they are “a committed partner to the community. If you’re not all-in, don’t even attempt it.”

DISCUSSION QUESTION: How effective have U.S. grocers been in catering to the wide variety of consumers that are grouped within the Hispanic demographic? How can grocery retailers best deploy marketing and merchandising tactics to capture a greater share of wallet from this growing community?

Please practice The RetailWire Golden Rule when submitting your comments.
Braintrust
"First-gen, second-gen, Hispanic Millennials, Hispanics from Mexico, Puerto Rico, South America, the Caribbean, Central America, etc. – all have foods that are unique to them. "

"The answer to the first question is, with some notable exceptions, the industry has consistently failed serving these SEGMENTS for as long as I’ve been following them."

"You must “do local well.” what you sell in one store on the other side of town may be different depending on the market."

Having worked for a retailer that has Hispanic customers and a retailer that’s main focus is the Hispanic customer, I do not know that you can go “all-in” with Hispanic customers. First-gen, second-gen, Hispanic Millennials, Hispanics from Mexico, Puerto Rico, South America, the Caribbean, Central America, etc. – all have foods that are unique to them. It is very difficult for the mainstream retailer to service all of those demographic types properly. What I have seen in most non-Hispanic-centric retailers is a middle-of-the-road assortment – that assortment that has gone more mainstream and is attractive to those Millennials and consumers that have incorporated that assortment into their everyday cooking. This will take some evaluation and carefully curated assortments (geared toward individual neighborhoods) from those retailers that are thinking of offering product assortments tailored to the Hispanic demographic.

I’ll agree with Mr. Hernandez – you probably cannot go all-in because there isn’t anything like a Hispanic consumer – age and origin are much more important. That said, if you are operating in a Mexican community, those stores can be Mexican-oriented. Salvadorian community – Salvadorian products, etc. Going all-in may be going all-small-in.

With regard to the Hispanic shopper, it is all about the products, not about the language. By the second generation, all will be fluent in English.

Richard Hernandez nailed it, there isn’t much more to add. We have been talking about the opportunity and impact of the Hispanic market forever – I remember Faith Popcorn sharing the importance of serving this diverse market in the early-’90s – yet there still isn’t as much happening at retail as there should be.

This is a very important conversation for the supermarket industry. The presentations at FMI Midwinter made clear that the expanding Hispanic market is actually an aggregation of sub-segments, each with its own preferences and traits. We heard this weekend about the rich variety of national cuisines, degree of acculturation, and generational differences beneath the broad descriptor, “Hispanic market.”

While this makes the challenge more complex for retailers, it is actually high time that they look more deeply at the varying needs within their communities. While no grocery retailer can be all things to all people, many face an opportunity to be more responsive to the wants and needs of their local communities.

We heard the term “authenticity” mentioned several times by the speakers at Midwinter. While that’s a quality you can’t fake, many shoppers will be appreciative of visible effort. Listen actively and they will tell you what they need most.

Hi James, the term “authenticity” has long been used as a pillar in the Hispanic market, however it brings us back to the topic of the day which is being “all-in.” Authenticity not only means assortment, but do you have associates that can speak Spanish and help answer questions about product or location of product? Do the people that work there use the product- can they make recommendations? I have been involved in a lot of studies on this and consumers said loud and clear that these are important attributes that support authenticity.

Richard — Totally agree with everything you’ve written here. I’d only add you need to have real respect for the people as individuals and for the cultures being marketed to. I remember consulting with a grocer who had a problem with clerks in a neighborhood that was three quarters immigrant and first generation Mexican-American and one quarter Anglo. The Anglos complained that the (largely Mexican-American) clerks were “shifty” and “criminal” because they “refused” to make eye contact. Of course, that was because they saw it as disrespectful and aggressive. In another case I worked with a retailer who opened a beautiful, brand new supermarket in a neighborhood full of Mexican and Central American immigrants. He had operated stores in those communities before and the new store represented his “give back” to the community. Everything was perfect. He had all the right produce selections, all the right meat cuts, and all the right everything. But, despite his experience, his meat sales floundered and the store was in real financial trouble. The problem? In his bid to… Read more »
1
|
0
-   Share

I’m friends with the owners of Minneapolis’ largest Asian supermarket, United Noodles – local segmentation is the key to their success. Did you know there is a significant Hawaiian community way up here in the Twin Cities? UN sure does – and stocks the same products you can find at a local grocer in Honolulu, fresh fruits, meats, and poke, beverages, hot spam musubi in their deli; and cements local loyalty with targeted promotions and even cultural programming like their famous luau each November. The store is packed with hundreds of expatriates and friends that day! And they do similar things for the Filipino community as well, and our Indonesian/Malaysian community, etc. as well as for the traditional Chinese, Korean, and Japanese shoppers.

The outstanding LeeLee supermarket here in Tucson may also be described as “pan-Asian,” and it devotes specific aisles to regional cuisines – Korean, Chinese, Japanese, Indian, Middle-eastern, Thai, Filipino and yes, Hawaiian. This strategy creates item duplication (how many places in the store do they need to merchandise tea?) but it provides each segment with the brands they know and trust.
Similarly, we see “pan-Hispanic” strategies in play at outstanding operators like the aforementioned Northgate and Aurora. Here in Tucson, a newly-opened Cardenas supermarket is a superb example. The experts speaking at Midwinter made multiple references to this. “Big middle” supermarket operators had best pay attention.

In the majority of traditional format supermarkets, Hispanic food merchandising is an afterthought. The product resides in a random aisle blending in with other ethnic foods. More of these items need to be integrated into traditional, non-ethnic categories to ensure Hispanic selections are side-by-side with the traditional varieties.

Well … well … well. At last, the ostrich has pulled its head out of the sand long enough to notice which way the wind blows. Trouble is the forest is still getting lost for the trees. For the past three decades I have been writing, speaking, and promoting in any way I could the idea that the industry had to wake up to these important consumer segments. Notice I said segments, not segment. There are no “Hispanic” shoppers. In point of fact there is no place called Hispania — or any variation thereof — where they would have all come from. There are consumers of a variety of ethnic heritages — Mexican, Puerto Rican, Dominican, Bolivians, Peruvians, etc., etc. who happen to speak one form of Spanish or another. Some of them have been in this country for one day and others are descended from families who were in this country before it was this country. Oh, and they all don’t speak the same Spanish all the time. I remember being in Puerto Rico… Read more »
4
|
0
-   Share

I’ve written multiple whitepapers on what different consumer demographics look for from grocery retailers. For Hispanics as a whole, grocery shopping and cooking are communal, family-oriented activities. Retailers can leverage this knowledge by bringing bilingual cooking classes in-store, creating space for customers to hang out, and using diverse models in their marketing materials.

Jasmine, you are correct on the communal aspect of shopping for the Hispanic customer. It was another important pillar to consider in marketing to that customer.

The prevailing assumption here seems to be that nationality determines shopping habits (and wants). I can certainly see that being true with various food (specialty) items, but what about everything else? True, a consumer may have bought a certain brand of rice or detergent or whatever in their native country, but are they wedded to it forever? Does it make sense to carry it if it’s an obscure brand here in the U.S.? Should efforts be made to attract these consumers to domestic brands, and if so, how? OTOH, one can argue that this is a classic example of niche marketing: know your customer and what they really want. Hard to argue with that advice … regardless of the specific actions that result.

It’s simple. If your market is Hispanic (or Asian, Irish, Italian, etc.) then you have to cater to the market. I’ve written about this concept. You must “do local well.” what you sell in one store on the other side of town may be different depending on the market. You sell lots of snow shovels in Rochester, NY. I bet you can’t find many in Miami, FL. So, play to the demographic.

Braintrust
"First-gen, second-gen, Hispanic Millennials, Hispanics from Mexico, Puerto Rico, South America, the Caribbean, Central America, etc. – all have foods that are unique to them. "

"The answer to the first question is, with some notable exceptions, the industry has consistently failed serving these SEGMENTS for as long as I’ve been following them."

"You must “do local well.” what you sell in one store on the other side of town may be different depending on the market."