FAA gives permission for Amazon’s drones to take off 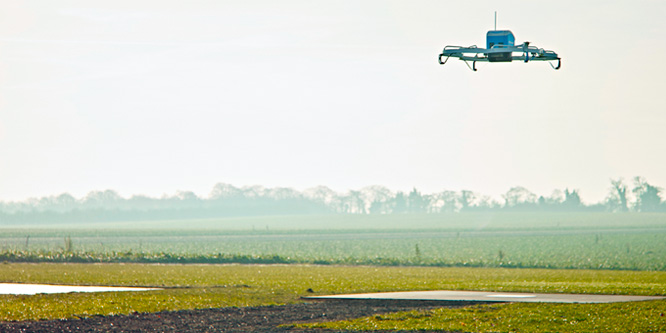 The Federal Aviation Administration approved Amazon Prime Air as an official “air carrier” last week, enabling the company to get its commercial drone delivery program off the ground in the U.S.

“This certification is an important step forward for Prime Air and indicates the FAA’s confidence in Amazon’s operating and safety procedures for an autonomous drone delivery service that will one day deliver packages to our customers around the world,” Amazon Prime Air VP David Carbon said in a statement. “We will continue to develop and refine our technology to fully integrate delivery drones into the airspace and work closely with the FAA and other regulators around the world to realize our vision of 30-minute delivery.”

Amazon’s aspirations for drone deliveries have been public knowledge going back to at least 2013 when CEO Jeff Bezos told a national audience on a “60 Minutes” segment that his company had a vision of using drones, more specifically octocopters, to deliver packages of up to five pounds to customers within a 10-mile radius from its expanding network of fulfillment centers in a half-hour or less. Last year, Amazon showed off its latest hexagonal drone model that could cover 15 miles in the same timeframe.

Even with its newly granted status, Amazon is still a ways off from filling the air with its delivery drones. FAA’s approval extends to using its unmanned craft to participate in a trial program overseen by the government.

“This is a long time coming for Amazon,” former FAA Administrator Michael Huerta told The Wall Street Journal. “They are developing real-time data, which is helpful to the [FAA] and gives Amazon a lot of experience in working through the growing pains of getting this business established.”

Amazon is not alone in its view that drones will offer a viable parcel delivery option in the future.

In May, CVS and UPS partnered together to begin delivering prescription medicines to residents of The Villages, Florida’s largest retirement community.

UberEats began working with McDonald’s to trial drone delivery in San Diego. The company said the drones had the ability to deliver online orders three times faster than bikes or cars at roughly the same cost as its standard service.

DISCUSSION QUESTIONS: How quickly do you expect widespread drone deliveries in the U.S. to take off now that the FAA has granted permission to Alphabet, Amazon and UPS to engage in trial programs? Does the FAA’s approval suggest that these companies have addressed safety and other concerns that have slowed deployment in the past?

Please practice The RetailWire Golden Rule when submitting your comments.
Braintrust
"This is good for experimentation, but I still don’t see a near-term future where lots of drones are flying around dropping off packages at consumers’ homes."

"How is Amazon’s warehouse blimps in the sky project going, by the way?"

While this is important progress, I still think we’re years away from seeing delivery drones fill our skies. I have no doubt that drones will eventually play a meaningful role in our everyday lives, and be a meaningful and cost effective delivery system for certain goods. However the concern remains: what does this look like at scale? How does the FAA manage hundreds and even thousands of drones buzzing about? How will people feel about it? Many questions remain.

Mark, you touched on the key phrase in this discussion: “…fill our skies…” As an engineer by training, I admire the progress of science but dread its application in this case.

The key here to me is the word “rural.” You can see how this idea would come to fruition much quicker and much more effectively first in rural areas where driving trucks to houses five miles apart makes little financial sense. I love the idea but, for urban areas, not so much and especially not for the first effort. And you can bet the whole world is watching!

It’s so rare that we need anything that fast that we ever want to have more vehicle clutter and noise in our neighborhood. When this really comes to be, we’ll see how many people feel as we do and how many take advantage of the opportunity to hone their target shooting skills.

I am not surprised that Amazon received approval for using drones. There is a tremendous amount of money invested in this, and Amazon is not about to waste money on something unless they know it will be worth it. However I don’t expect to see drones used for at least several years. There is no denying this will be a great technology and allow for the fastest delivery possible, but there are many factors to consider where something can go wrong. Accidents can happen such as 1.) mechanical failure and a drone falling from the sky landing on someone’s head, possibly killing them; 2.) a glitch causing two drones to collide and break apart, causing debris to fall to the ground; 3.) packages wrongly being dropped from the air and more. If you look at history, it took decades for the railroad companies to work out their kinks and the same goes for the auto industry. I don’t see this taking decades with technology skills today, but I do see several years before drones will… Read more »
1
|
0
-   Share

It is a significant milestone. For low density suburban locations, and particularly rural ones, the impact on the time and cost of serving last mile could be very high.

This would be yet another barrier for the competition and win for the customers.

This is good for experimentation, but I still don’t see a near-term future where lots of drones are flying around dropping off packages at consumers’ homes. We are still quite some way off from that Jetsons-like future!

I remember seeing this on 60 Minutes. I thought, this is really cool technology — but I still wonder how the FAA will police these drones especially in dense cities like NYC. I can imagine hundreds of these in the air from different companies — then what?

Richard, as a practical matter I’m less concerned with the drone traffic managed by the FAA and more concerned with “rogue” drones that might be deployed to interfere with the approved drones.

Ryan, yes, most definitely a concern.

Permission to try does not mean success. Even an approved test in one or two communities does not signal success is to come. There is a mountain of hurdles for drone delivery to become a reality even in a single market. The near term future will be costly and full of experiments. We are still a long way off before any of these players (despite their funding) have a fully functioning drone delivery system.

If this is not controlled very tightly, it is going to cause mayhem in the skies with potentially fatal consequences which are totally unnecessary. Nobody except a dying person or medical professional in need of a life-saving tool or drug needs anything that quickly.

It may be a mistake to assume drone delivery will be aimed primarily at urban/suburban areas. With a range of 15 miles and distribution centers located in rurban retail hubs, drones could be very cost effective in delivering high value items to rural homes right now. I don’t know what the volume for a given geographic area has to be for this to pay out. But it seems a drone has to be cheaper than a conventional delivery.

Wouldn’t you love to see the financials on drone delivery?

In labor costs drones win. Energy usage? I’m not sure, but I have to believe drones are potentially cheaper. Environmental impact costs? Drones would help lower these. So I guess it really depends on which financial impacts you are looking at. I’m not making a case for drones, just noting that we can see why Amazon finds then attractive.

Good points, Ryan. You have to wonder about insurance, though…

This has been a long time coming – but it doesn’t make it any less scary. Sure the drones will take pressure off the USPS and other carriers. However the opportunity for fraudulent drones — those masquerading as Amazon drones — is nervous-making. There are any number of organizations or individuals who might now see drones as a new mechanism for destruction, privacy violations, or even terrorism.

But what stops, “any number of organizations or individuals,” from pursuing those negative activities now? I’m not pro-drone necessarily, but any tool can be misused or weaponized. We don’t ban hammers because in the wrong hands they can inflict blunt force trauma.

This is very interesting. There were some experiments taking place by Amazon in rural Cambridgeshire, U.K. 12 to 18 months ago. While there was a lot of media coverage initially it is not clear what happened next – however based on this many were expecting these to commence first in the U.K. It will be great to see what happens next – with consumers seeking contact free acquisition of products it could well be the point in time at which these become mainstream.

We often talk about the last mile. This doesn’t solve the “last mile challenge,” but it does solve “the last five or 10 mile problem.”

There should be no contest regarding the economics of sending a truck with a driver versus sending a drone.

Gene, I agree. Now, I don’t know enough about drones to know how they are impacted by things like weather, etc., but clearly they should be cheaper to deploy.

Significant progress for sure, but while there is plenty of potential for drone-based deliveries in our future, I still don’t see how this is going to be managed at a large scale. Imagine hundreds to thousands of drones in the skies in one area. I haven’t seen anything that instills a sense of safety. I can see this working in less populous areas where the cost of car and truck delivery may be higher. Otherwise we are still years away from large scale drone delivery.

Are we going to have drone wars as other mega retailers jump in? This will not end well, as drones at some time are going to crash — and then here come the lawsuits. We have retailers everywhere. How much weight can a delivery take? It will cost a small fortune to get a delivery. People with lots of money will use this service to impress their friends, but what average Joe is going to use it on a regular basis? How is Amazon’s warehouse blimps in the sky project going, by the way?

Tony, trucks crash too — more often than drones, in fact. But your point about who gets access to airspace is a profound one.