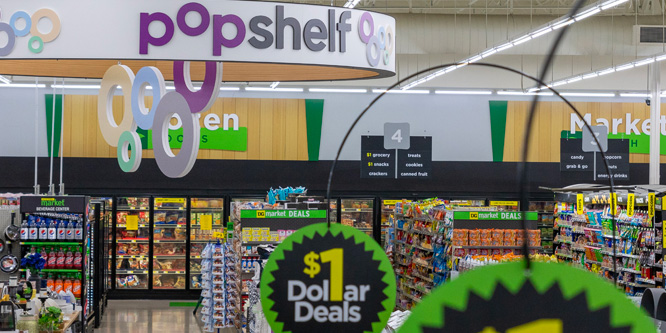 The combo store promises to be Dollar Store’s largest format by far.

Dollar General began opening the DG Market locations, featuring a wider variety of perishables and dry groceries, about a decade ago to address food deserts in both rural and metro areas. At 16,000 square feet, DG Market is about double the size of a typical dollar store, but small compared to the average U.S. grocer (46,000 square feet).

Introduced last October, pOpshelf focuses on home decor, seasonal entertaining and health and beauty items priced below $5. Slightly larger than the traditional Dollar General at 9,000 square feet, pOpshelf’s target demographic is women in households earning between $50,000 and $125,000 annually compared to Dollar General’s target of women from homes with annual incomes of $40,000.

The company has so far opened 16 pOpshelf locations and has plans in the works for an additional 50 by the end of 2021. On its recent first quarter analyst call, Dollar General officials said pOpshelf’s initial stores are showing significantly higher one-year sales volumes and gross margin rates than the traditional Dollar General store, with a net promoter score in the upper 80s to low 90s.

Dollar General has opened its first two The DG Market + pOpshelf combination stores in Tennessee near its Nashville headquarters. Plans call for approximately 25 more by the close of this year.

“Through this combined format, we aim to deliver the value and products customers trust from a DG Market with the continually-refreshed merchandise including beauty and seasonal products, home décor and arts and crafts through pOpshelf,” said Todd Vasos, Dollar General’s CEO, in a statement. “We have been pleased with customers’ positive initial reactions, and we look forward to welcoming additional customers to experience our newest format.”

Another dollar store testing separate in-store shops is Five Below. In March, the chain announced that it would expand Five Beyond, an in-store concept featuring products with higher price tags, to one-third of its stores.

DISCUSSION QUESTIONS: Does DG Market + pOpshelf sound like a winner or does combining formats only confuse the consumer? How may the concept extend Dollar General’s reach? Is the concept potentially a competitive threat to any particular chains or channel?

Please practice The RetailWire Golden Rule when submitting your comments.
Braintrust
"Opening a pOPshelf inside a DG Market likely makes sense if they are replacing less productive floor space with what they believe will be appealing to the DG shopper."

I haven’t seen the prototypes, but combining DG Markets with pOpshelf sounds like a bigger DG to me. I don’t see this adding much to the DG brand that simply expanding the selection in larger stores wouldn’t. And that would just make DG a small footprint Target or Walmart, right?

The combined format of DG Market + pOpshelf is a smart strategy to make the store more of a one-stop shop and attract a larger consumer audience. Consumers are becoming accustomed to joint branding and stores-within-a-store and dollar stores will eventually need to expand beyond the $1 price point.

The target audience for a stand alone pOpshelf is different and might visit DG/DG Market less than the typical DG shopper. Opening a pOPshelf inside a DG Market likely makes sense if they are replacing less productive floor space with what they believe will be appealing to the DG shopper. It seems like a viable store-within-a-store to test. I wouldn’t be too worried about confusing the consumer. There has to be a proximity thing at play here so there is probably not enough exposure to both to “confuse” anyone.

There could be some overlap with Hobby Lobby, Michael’s, JoAnn, Big Lots or other competitive dollar chain shoppers.

There is limited downside to DG in this case, and it is money well spent to see what happens. If it doesn’t work out, they can quickly pull out of DG Markets and move that merchandise to pOpshelf stores.

This works well on so many levels. By showcasing pOpshelf as a store-within-a-store rather than just adding new products to the DG Market mix, Dollar General is further positioning pOpshelf as its own brand, yet also bringing the benefits of a fresh product mix to all customers. And by essentially partnering with themselves, they don’t have to negotiate on sharing customer data or location in-store. They have actually found a way to have their cake and eat it too.

In many locations this will be a winning combination. Having an improved array of non-food products via pOpshelf will stimulate impulse buying and help push up basket sizes and margins. That said, in some more rural areas I can see Dollar General sticking to its traditional format both because the income profiles are not optimal but also because their smaller store size allows them to generate a very quick return on investment which is one of the reasons they can expand so rapidly and open so many stores across the country.

GIven Dollar General’s store base that tends to skew to more rural locations, combination stores could be a winning formula. They can bring the best of two worlds to customers that may be under-served, which could be a catalyst for sales and unit growth for the company. These stores can help reinforce Dollar General’s strong brand and value proposition with customers.

This store-within-a-store strategy is a solid move for Dollar General and makes sense for the DG Market locations, given their larger footprint. The combined brands will offer DG Market customers a more interesting in-store experience, given pOpshelf focuses on continually-refreshed, seasonal merchandise — the promise of something new and unexpected. The win-win is giving customers a reason to visit more frequently, while the pOpshelf offering drives larger basket size at higher margins – a great utilization of the real estate.

I see nothing but upside here for DG. They will drive larger baskets, increase the shoppability (and treasure hunt) of their locations, and attract more customers. They will never be a Target or out-Walmart Walmart, but their smaller footprint and reasonable prices will surely chip away on the edges of many channels.

I’m sure someone at Target HQ will watch these hybrid locations closely; if any show success, they would be an inviting destination to drop a “mini” Target into. (Where’s the best place to site a CVS? Kitty-corner from Walgreens, of course….)

Quite different customer base between Dollar General and Target.

I’d say Walmart is a closer bet but Walmart already tried to drop small Walmarts all over Dollar General territory and it did not end well for them.

It would not end well for Target either. It would end even worse.

You never know if you don’t try so why not? It makes sense to combine both formats to develop a format that will help them grow in markets that need something more than the basic DG format.

I don’t know enough about pOpshelf and its success with the described demographic to make a definitive comment, but creating a store that caters to two very different demographics is likely to deter the more affluent demographic. Part of selling to higher-end shoppers is establishing a level of mystique and exclusivity that creates a feeling of uniqueness. When that’s plopped in the middle of a dollar store it will turn off a segment of shoppers. I get it from a real-estate cost savings perspective and the chance to grow higher dollar product sales among the lower-earning demographic, but in the end it may just be a financial wash that stymies the growth of the more affluent segment.

I find this move confusing from branding and merchandising perspectives. Store-within-a-store concepts are typically a smart way to combine forces while still maintaining distinct, separate brands. If the goal here is to further the DG brand, consumers may not recognize that pOpshelf is still their brand.

DG is a prodigious user of analytics technology, so any move they make has been tested far in advance. Can’t wait to see how this works.

Braintrust
"Opening a pOPshelf inside a DG Market likely makes sense if they are replacing less productive floor space with what they believe will be appealing to the DG shopper."