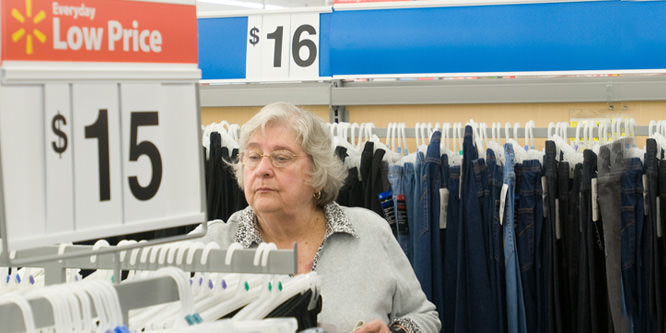 Walmart in Canada is testing whether it needs fitting (AKA changing) rooms in it stores.

According to a report by The Chronicle Herald, the chain is reducing the space given to or removing the rooms from select stores in parts of Canada to see if the actions will improve results by opening up space to offer a greater selection of merchandise. Walmart is betting that consumers will pick up clothing items to try on at home and the number of returns will not prove onerous from a cost standpoint.

In removing fitting rooms, Walmart is going against the rule that customers who try on clothes are more likely (71 percent more so) to buy than those who do not. While not generally applicable to Walmart, research has also shown that providing customers with service in fitting rooms nearly doubles the sales when compared to customers who are “just looking” on the sales floor.

DISCUSSION QUESTIONS: Is the availability of a fitting room in Walmart any more or less important than in other retail outlets? What do you think is the likely outcome of Walmart’s fitting room test in Canada?

Please practice The RetailWire Golden Rule when submitting your comments.
Braintrust
"I can’t help but wonder if this is more of a loss prevention issue than an effort to gain floor space."

"Dressing rooms at Walmarts that I’ve been in don’t seem to take up much room, so what’s the real issue here?"

"All I can say is, WOW! Evidently Walmart thinks that their customers are different from the rest of the world..."

Walmart shouldn’t accelerate its fitting room foray unless/until it backs it up with additional housekeeping. Piles of clothes in shopping baskets or on the floor will be counterproductive and could easily erase any incremental gains.

The answer is no. The fact that Walmart’s customer base has not evolved to the need for fitting rooms is the obvious reason, but the truth is closer to shrink. The company’s decision is more likely attached to the need to keep shrink lower in the face of slim margins and e-commerce competition.

If you want to sell clothes, dressing rooms are a must. Having to buy something, take it home, try it on and then return it is a hassle that most people want to avoid.

Buying from a Walmart or any brick-and-mortar location is more work and takes more time than sitting at home and ordering a couple sizes from X online retailer, having free delivery, determining what you want and shipping the rest back free of charge.

I can’t help but wonder if this is more of loss prevention issue than an effort to gain floor space.

All I can say is, WOW! Evidently Walmart thinks that their customers are different from the rest of the world who need to try on clothes before they make a buying decision. They evidently are hoping that more people just give away or throw away clothes that don’t fit once they try them on at home rather than returning them to the store which costs them lots of money in payroll and margin.

As our ongoing research confirms time and again, the biggest mover of apparel retail conversion is fitting room usage. Period.

Walmart would be better served to clean up their fitting room act by creating a clean and secure fitting room environment. They would not only reduce any shrink problems, I guarantee they would sell more.

Everyone seems to have figured it out. Housekeeping, shrink, and safety.

Maybe fitting rooms are necessary for discounters, but if the returns policy is decent, maybe they can make more productive use of the space. Costco seems to sell a lot of clothing without fitting rooms.

Don’t take away the fitting rooms! I have bought several clothing items at Walmart, nice pieces that I like, that fit (after trying on to see if it’s the right size and fit), look nice, receive compliments, but that’s not the issue. I wouldn’t take home anything that I have not tried on — unless it’s a sweatshirt or t-shirt (is that what they sell at Costco — or do they have big fashion selection?).

Dressing rooms at Walmarts that I’ve been in don’t seem to take up much room, so what’s the real issue here?

While it may seem less important for a discount store like Walmart to have fitting rooms because the prices are low, but there are several reasons why I think this will likely be a failed experiment. Clothing sales will decline. As noted in the article, people buy more when they get a chance to try clothes on. Shoppers don’t enjoy the returns process. No fitting rooms means more returns and the returns process at Walmart usually involves long lines and slow processing times. As people experience this once or twice, it will make them think twice before buying clothes at Walmart next time. Rural Stores have longer travel times. In some rural areas, Walmart is destination store that some people travel an hour or more to and the last thing they will want to do is make an extra trip to return clothes that don’t fit. More returns means more labor costs. With more clothes being returned that don’t fit, Walmart may need to hire more staff for returns and exchanges. The only way this… Read more »
6
|
0
-   Share

Century21, Filene’s Basement, thrift stores, etc. have pulled it off without dressing rooms, but the environment that it creates is more of a “barroom brawl” customer experience.

I wonder if there’s a retail equivalent of “jumping the shark,” where every new idea is some head-scratching backward step. Maybe WM is trying to one-up Target in Canadian fumbles?

Anyway, yes it’s somewhat less important than, say, a department store that sells dresses and tailored clothing; and of course much of the clothing — shoes, jackets, accessories — doesn’t need a fitting room anyway. But that seems like a feeble rationale … most other stores can say the same and yet offer them. And — as noted above — by initiating this in Canada, the move is likely to be seen as a slight to our Neighbors to the North.

Walmart is throwing a lot of ideas up against the wall these days and I hope this experiment with removing fitting rooms does not stick. Honestly, shoppers that make the effort to visit a Walmart should have the opportunity to try before they buy and be able to use a fitting room. The physical footprint is small. And, there are creative alternatives, such as pop up fitting rooms. Come on, where is the customer service improvement here? Clearly it may be a short-sighted effort to reduce theft that ends up reducing the pleasure of shopping considerably.

Fitting rooms are no less important at Walmart than any other outlet selling clothing. The key is to make the fitting room an experience worth having. Now, if Walmart said they could achieve the same outcome with “virtual reality” and “magic mirrors” I would say they could eliminate them.

Bottom line, Walmart should tread carefully if fitting rooms are removed. Their clothing sales may also no longer be fitting.

I agree it could be a loss prevention and security issue. Dressing rooms these days require staffing for shopper safety and loss prevention concerns. Walmart isn’t designed workflow-wise or staffed for it, and if you are buying a jacket, a changing room is not needed.

If you are talking casual clothes, frankly you can buy by measurement and return if needed. Costco is one example of a store that sells clothing with no dressing room, and they sell pants. I suspect Walmart is counting on any drop in conversion rate to be offset by removing security and labor issues.

Braintrust
"I can’t help but wonder if this is more of a loss prevention issue than an effort to gain floor space."

"Dressing rooms at Walmarts that I’ve been in don’t seem to take up much room, so what’s the real issue here?"

"All I can say is, WOW! Evidently Walmart thinks that their customers are different from the rest of the world..."