Does J.C. Penney still have a future? 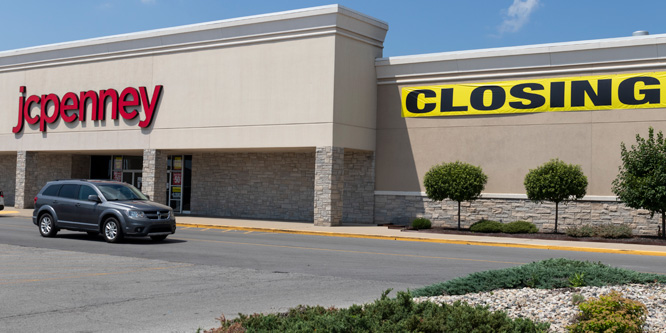 There are no white knights coming to J.C. Penney’s rescue.

An attorney representing the bankrupt department store chain, Joshua Sussberg of Kirkland & Ellis LLP, said that negotiations between the retailer and Authentic Brands Group, Simon Property Group and Brookfield Property Partners hit a wall this weekend. That means Penney has nine days to work out a deal with lenders to acquire the business or it will be forced to close significantly more stores than it planned. The retailer started with 850 stores when it filed for bankruptcy in May and has since announced plans to permanently shutter 150 of those.

CEOs of both Authentic Brands and Simon have said in recent months that they are interested in acquiring once-successful retailers on the cheap. The two companies, sometimes joined by Brookfield, have acquired the Aeropostale, Brooks Brothers, Forever 21 and Lucky Brand businesses in recent years.

Apparently, the price that Mr. Simon’s company and its partners would be willing to pay to assure it makes money is too low for Penney and its lenders to stomach.

“Our lenders are no longer going to be held hostage,” Mr. Sussberg said in a court hearing yesterday. “Time is not our friend.”

Penney’s counsel said that lenders were open to negotiating a deal involving a swap of debt for equity to help the retailer stay in business.

Reuters reports that U.S. Bankruptcy Judge David Jones said in yesterday’s hearing that Penney needs to continue talks with lenders. Failing to do so, he told a shareholder, would result in “the death of an entity.”

Penney, which also received bids from Sycamore Partners and Hudson’s Bay Co., is reported to be in contact with those companies, although their initial bids were seen as inferior to that offered by Authentic Brands, Simon and Brookfield.

“We are going to do everything humanly possible to ensure that J.C. Penney will be around for the foreseeable future,” Mr. Sussberg told the court, according to Bloomberg.

DISCUSSION QUESTIONS: Would a debt for equity swap with J.C. Penney’s lenders put the chain in a stronger position going forward than a lowball deal from other bidders? Do you agree that Penney is done if a deal is not made?

Please practice The RetailWire Golden Rule when submitting your comments.
Braintrust
"It’s certainly a better idea than turning the chain into Amazon fulfillment centers, but I still think J.C. Penney might be a chain whose time is done."

"I suspect they are going to negotiate themselves into oblivion."

"Amazingly, they sold over $1B worth of product in the quarter ending May 2. Customers are still buying there."

16 Comments on "Does J.C. Penney still have a future?"

It’s certainly a better idea than turning the chain into Amazon fulfillment centers, but I still think J.C. Penney might be a chain whose time is done.

Unfortunately, Paula is right. Their time is done. They’ve done a great job of innovating and all it did was help them hang on a little longer.

Given the size of the business, it is highly likely that there will be some kind of future for J.C. Penney – even if that’s as an online brand. However, the real question is whether the future is sustainable or whether it just consists of buying more time so J.C. Penney can limp along to another bankruptcy. From what I have seen of the bankruptcy proceedings, the latter seems to be the current trajectory. In order to have a chance of survival, J.C. Penney needs radical surgery and intensive care. It does not seem likely it will get either and that doesn’t bode well for its future.

Nah. No chance. But it’ll be interesting to see what the victors will do with all that space. Fulfillment centers? Dark stores for pickup and delivery? Could they become pickup centers for the entire mall (which are much needed to compete with the box stores)? J.C. Penney was over when they let Ron Johnson go. He provided a glimmer of hope about what the future of retail could become (right or wrong, we’ll never know) and the minute that flame went out it was game, set, match.

I respectfully disagree about Ron Johnson, Lee. Yes, the company was due for a revamp when he entered the picture — but he went several steps too far, by upending the company’s pricing strategy, dropping its most profitable private labels, and so forth. (All without the benefit of market testing.) JCP dropped more than a quarter of its volume in a single year, and it has never recovered.

Unfortunately, I believe it is a case of too little too late. So you buy more time – will that give you time to do the rest of the remodels and try to shore up losses? I just don’t think that more time is the answer.

J.C. Penney is just one of many retail brands who succumbed not to COVID-19 but to “preexisting conditions” (so to speak). In the case of J.C. Penney, it was a troubled company with sales, profitability and debt problems preceding its current leadership team. Five CEOs in 10 years (each one with a radically different strategy than his/her predecessor) is not the sign of a stable company.

Simon and its allied investors may already have a full plate with its other recent acquisitions, from Forever 21 to Brooks Brothers. Repurposing the J.C. Penney mall locations for Amazon or other tenants may turn out to be the best long-term play.

COVID comorbidity? I like it … well, I don’t LIKE it, but I think it’s an accurate diagnosis. JCP seems to be a slightly less sickly version of Bon-Ton (too much debt, too little relevancy in the current marketplace) and that relative health seems to have bought them a little more time, rather than any long-term recovery.

Rehabilitating J.C. Penney would be a steep uphill slog, and all my BrainTrust colleagues seem to agree. And a debt for equity swap would be disastrous.

The moderate department store sector has been in steady decline for more than two decades. Many years ago I started writing about the collapse of the mediocre middle–the notion that in an age of abundance, even very good was not good enough; you had to be remarkable. The pandemic has only accelerated the need to do this. In addition to the obvious struggles of the core department store categories more broadly, there is no scenario where the unremarkable middle does not continue to contract. The only question is whether it will consolidate enough for more than 1 or 2 moderately priced national retailers to have a viable long-term business. The way things look today, my best guess is Kohl’s and Macy’s will survive the carnage. J.C. Penney may find a way to emerge from bankruptcy and, like Sears, live to die another day. But the fact remains that even under the best circumstances where we have a more robust recovery from COVID, the pie will continue to shrink and without delivering something more intensely customer… Read more »
5
|
0
-   Share

I suspect they are going to negotiate themselves into oblivion. Debt for equity will dress up their balance sheet, but it isn’t going to produce revenue and customers If upwards of 30% of retail (and growing) is now done over the web … why aren’t upwards of 30% of brick and mortar going away. Oh wait … it finally is going away.

Such a sad state of affairs. Over 70,000 employees for a 118 year old company and iconic brand that’s about to end. Amazingly, they sold over $1B worth of product in the quarter ending May 2. Customers are still buying there. Just not enough to cover debts (they’ve been borrowing for over a year) or organizational structure.

I can’t predict this one; it really depends on whether there’s a white knight out there somewhere. A debt for equity swap doesn’t do anything but shift the debt to a new management team who might want to keep JCP running. A lowball deal all but guarantees liquidation, rare to see new money being added without a strong growth plan — and even more unlikely in the midst of a pandemic.

Rarely, if ever, do those waiting out for a better deal get it unless there are strong secular trends in their wake (M&A 101).

The reality: the business would go into a self-destructive spiral if they didn’t take it.

I wonder nowadays how parents explain to their children the value of learning from your mistakes when (allegedly) fellow adults don’t do the same. We “rescued” ourselves from the excess debt that helped cause the Great Recession with a dozen years of overly low interest rates … that encouraged taking on more debt.

Back to JCP, I guess the choice is between “bad” and “worse.” I’ve little faith in HBC — look what wonders they accomplished with Lord & Taylor (who finally reached their sad end last week); and while Penney’s is presumably more salvageable than L&T was, it’s an issue of being overextended and just not really having shown us much so far.

So Simon at al by default: it’s time to look not at the money offered but the bidders’ qualifications to run the company, slender though they may be in this case.

JCP the brand may in fact be on its last legs. Which is completely different than saying the space, the real estate, the supply chain and the distribution channel have no value. But the magnitude of change and re-rationalizing may be too much for any single entity to take on. Except maybe Amazon.

And no, I don’t mean mini DCs. I mean retail. My guess is that Amazon is thinking in time frames measured in decades, not years. And my further guess is that they want a meaningful brick & mortar presence sooner than later.

The fact that we are in the middle of a pandemic makes valuing the JCP enterprise and its component parts a little difficult. But the fact remains that even if the JCP brand is not in robust shape at the moment, the assets of the business are a pretty amazing platform for the right entity to leverage into a very meaningful future business.

Braintrust
"It’s certainly a better idea than turning the chain into Amazon fulfillment centers, but I still think J.C. Penney might be a chain whose time is done."

"I suspect they are going to negotiate themselves into oblivion."

"Amazingly, they sold over $1B worth of product in the quarter ending May 2. Customers are still buying there."