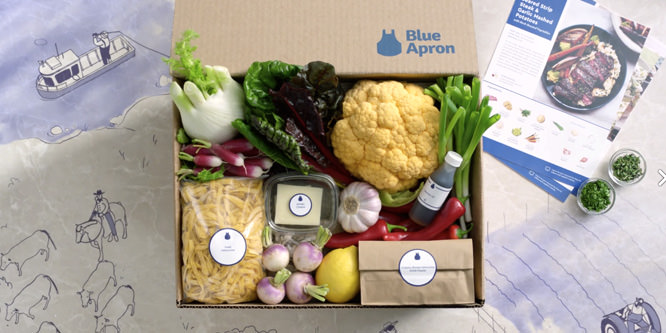 Could it be that meal kits aren’t destined to disrupt the foodservice and retailing worlds after all? Despite high expectations, Blue Apron’s initial public offering (IPO) didn’t go as well as expected yesterday. That has once again raised doubts about whether meal kit delivery can move from its current niche to capture the dollars of American consumers on a mass scale.

Blue Apron was looking for its share price to range from $15 to $17 before the first of its shares were sold. Instead, its stock never rose above $11 per share, finally closing at its opening price of $10. Some investors, according to Reuters, were apparently concerned about the IPO following so closely behind Amazon.com’s $13.7 billion bid for Whole Foods. Others see Blue Apron’s heavy investment in marketing as unsustainable beyond the short term.

Blue Apron founder and CEO Matt Salzberg was not outwardly discouraged by the stock’s performance on its first day. In an interview on CNBC’s “Squawk on the Street,” he said, “We’re focused on the long term, and the stock price today whether it’s up, down, left or right is really just the beginning of this new chapter in our company’s life, and were excited about it.”

According to a recent Market Force Information report, Blue Apron is the most popular of the meal kit delivery services currently available. Thirty-nine percent of those who have tried meal kit services have used Blue Apron, followed by Hello Fresh (30 percent) and Home Chef (10 percent).

Much of the buzz around meal kit services has centered on its potential. A recent report by Pentallect puts the size of the current market at $2.2 billion with annual sales growth projected to range between 25 percent and 30 percent over the next five years. The firm estimates fewer than four percent of households have tried a meal kit service.

The potential of the market has led to companies including Amazon.com, Campbell Soup, Kroger, Nestlé USA, Publix and Unilever either buying into third-party services or developing their own meal kit offerings.

Sun Basket, a provider of meal kits featuring organic foods, recently picked up a $9.2 million investment led by Unilever’s venture capital arm. The service plans to follow Blue Apron in filing an IPO it hopes will raise its valuation to $1 billion.

DISCUSSION QUESTIONS: How do you explain the lukewarm performance of Blue Apron’s initial public offering of stock? Will the lack of enthusiasm have any effect on retailers and food manufacturers that are currently making their own meal kit investments or considering it?

Please practice The RetailWire Golden Rule when submitting your comments.
Braintrust
"If anyone is going to do meal kit delivery cost-effectively and well, it’s Amazon."

The issue Blue Apron and the other meal kit services have is retention. How often will the fewer than 4 percent of households who have tried the service use it again? The mass market cannot afford to use these services over and over again. It is a nice novelty but until you can crack the mass market appeal, you won’t get the needed retention.

If we look back at the Let’s Dish concept, it was going to take over foodservice and supermarkets. But it did not because the economics don’t work for the average family. The economics of these home meal box services don’t work either to get retention. And retention is the key to a successful business.

Trial leads to adoption — sometimes. Blue Apron’s investment in marketing is designed to induce trial. As Phil pointed out the real measure of success is repeat business.

My expectation is that people will try it but will quickly find that the concept is far better than the reality and their use of Blue Apron and other meal kit suppliers will fade. It is likely that there will be a core group of users but not one large enough to sustain the number of meal kit suppliers in the market.

The Blue Apron IPO suffered at the hand of the Amazon purchase of Whole Foods. Blue Apron and the others have proven that meal delivery is something people really like, but the price from these providers can be prohibitive.

If anyone is going to do meal kit delivery cost effectively and well, it’s Amazon. The market believes in Amazon’s last-mile prowess and rewards accordingly. Again, advantage Amazon.

Agreed on all points. Grocery stores have long had the potential to deliver on better, cheaper meal kits but have been hamstrung by the inability to deliver to their customers’ homes. Now that Amazon and Whole Foods have hooked up, they have the culinary chops and logistics prowess to make it a reality. AmazonFresh will be bolstered by the Whole Foods private label brands, and they will have the most legitimate chance at dethroning Blue Apron and all the copycats. Only time will tell how long they try to go at it by leveraging their loyal Prime customer base and also if they are successful at turning a profit more quickly.

The meal kits just don’t provide enough total value to keep a consumer hooked and that is shown by the churn rates. This should trouble an investor. The kits save a bit of time as there is no grocery shopping, but there is a time commitment as you have to select from their menu. Besides, most consumers are still going to have to go the grocery store for milk, beer, diapers, etc. and it is just not that difficult to pick up a few more items to make a meal.

This might be better as a service where the consumer buys a block of meals and occasionally schedules one to be delivered — more like takeout. That seems more like the cadence that supports the consumer desire for the service. However, I’m not sure that frequency would power the Blue Apron business model.

To reinforce the points made above, here is a great analysis of their current subscriber economics — and it isn’t a pretty picture. 72 percent of users that try the service are gone after six months. That is a ticking churn time-bomb that will challenge their long-term chance of survival as they have to spend more on acquiring customers.

BrainTrust
Peter Fader
Professor of Marketing, The Wharton School of the Univ. of Pennsylvania

I’m not sure if this is the analysis that Tom referred to, but here’s a really good one by my PhD student Dan McCarthy.

In short: the unit economics couldn’t be worse. And I’m afraid the same is likely true of all meal kit companies — not to mention every kind of “thing of the month” subscription service. Basically, they’re all pretty much doomed to fail — unless some naive retailer or CPG firm overpays for them and makes the founders look like geniuses …

Peter – it is the very same! Nice work! As acquisition costs accelerate to woo mainstream users, the LTV of the customer doesn’t accelerate as well, leaving the service extremely unprofitable.

Blue Apron and other meal kit services are not cheap, so that limits the number of potential households that could subscribe. It does not surprise me that its IPO went nowhere. The IPO was primarily a way for investors and employees to cash out. The market did not want to buy in.

The fact that they went public with the kind of metrics that they have experienced is surprising. Two key investment metrics are the cost of acquisition (of the customer) and rate of retention.

I am guessing this IPO was based completely on the publicity as a way to get the original investors out before it was too late.

Meal kits are a bit like getting IKEA furniture at pre-assembled furniture prices. I like them, they’re fun — it gives you the feel of having a sous chef to pre-measure all your ingredients. But they’re no staple of dinnertime. They exist in a difficult space: slightly more convenient in storage and cooking, definitely less convenient in shipping and price. I suspect that many others who tried meal kits found what I did: If I want to cook, I need more flexibility. If I want convenience, I’ll order food that’s ready to eat.

A quick analysis of the financials disclosed in the Blue Apron circular shows amazing growth between 2014 – 2015, with growth in 2016, but at a reduced rate. Investors should have demanded to see how the growth pattern continues through the end of 2017 in order to draw conclusions about retention rates.

I’ve seen criticism of the marketing spend at Blue Apron, but as a percent of revenues, the numbers have remained consistent in the 18% range. Overall, Opex is decreasing as a % of revenues over the 2014 – 2016 period. At least the company is controlling overall expense levels as sales grow.

This is a company which might have been better advised to stay out of public markets. The model is too easy to duplicate for the company to sustain market value over a longer period of time. A better strategy would have been to achieve profitability and become an acquisition target on a smaller scale.

What is amazing to me is the Blue Apron valuation is still nearly $2B, even with the lower IPO price. There is no way in the world Blue Apron will be around three years from now.

The article tells us why. Competition. Amazon may have scared investors, but that’s not the only competition. Local stores are now creating meals similar to Blue Apron that are put together that day — even fresher. The stores can make it easy to pre-order and perhaps pay online and pick up later (BOPIS). The value prop of Blue Apron is good. Meals are fresh, complete, reasonably priced, etc. They will have to learn to compete with locals as well as other companies who will deliver similar goods/meals.

Well you’d never have guessed it from the comments on RW. Oh, wait a minute — that’s exactly what you’d have guessed, or perhaps hoped for (if you believe in an orderly world) since IIRC the concept was almost universally panned here.

Perhaps best not to crow too loudly, but if this represents a new era when concepts are evaluated sensibly, and even good ideas are properly discounted for the substantial risks they carry, then we should all be happy.

Braintrust
"If anyone is going to do meal kit delivery cost-effectively and well, it’s Amazon."