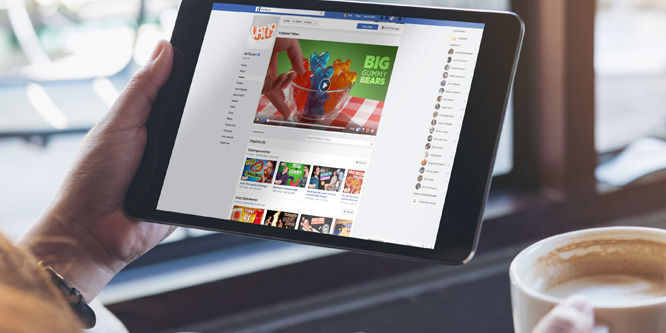 The research from The Manifest, a business news and how-to site, found that people, in general, are using social media more today than they did in 2017. Women are more active users of social media, with 75 percent using it several times a day, compared to 64 percent of men.

“[Facebook] has been defaulted to people’s home on the internet; it’s the other internet,” Mr. Loewen told The Manifest. “When people think of where to go and what media to consume, they go to Facebook. It’s like when you’re bored, you turn on the TV. Regardless of whether the channels on TV are bad or not, you’re going to turn on the TV. People are going to use Facebook.”

Retailers and brands have long struggled to figure out how to use social media to drive customer engagement and sales.

Earlier this year, Jamie Salvatori, founder of Vat19, an online store selling irreverent gifts that is known for its YouTube videos, told an audience at the Internet Retailer Conference and Exposition that driving sales via social channels requires a big commitment in human and financial resources.

Please practice The RetailWire Golden Rule when submitting your comments.
Braintrust
"The best social media platform for retailers is the platform being used by the customers they want to get closest to."

The platform that works best depends on the category that the brand is in. For example, fashion and food find Instagram a better platform for building a brand presence. Facebook is good for consumer products. Targetting younger audiences works best with Snapchat and Youtube. So the platform is determined by the audience. Where most brands and retailers have failed is using social media as just an advertising platform and that is not good. No one wants to wake up every day and have $5 off deals or coupons shoved into their social media feed. It is supposed to be a social platform. A way for the brand to connect with its audience. If you do a good job connecting, then you will build a customer base. The other mistake is resource allocation. For some reason, brands and retailers think you can market online for free or by putting some young person in charge of posting every day and sales will follow. They don’t. Social media is a great tool to find out information about your… Read more »
3
|
0
-   Share

The best social media platform for retailers is the platform being used by the customers they want to get closest to. The best way to use that platform is by fitting into it in the way that those customers are using it, like being a good neighbor or party guest. Retailers’ first foray into social media involved blunt instruments like putting their store on Facebook or trying to drive sales traffic through promotions and discounts. And whether it worked in the short term or not, that’s exactly not the way to do it. Retailers (and brands) are now doing things like focusing on content and hiring people away from magazines, etc. in order to develop that content, which makes me hopeful that they’re getting ready to try to be a “better neighbor” on social media, and add value beyond “here’s my deal for you!” And I still maintain: if you’re investing a ton and getting a ton of attention, but that’s not translating itself into brand awareness and loyalty and eventually sales, then there’s something… Read more »
4
|
0
-   Share

Sounds like Nikki kind of nails it here. Figure out your customer’s thinking, in their language, on their rhythm, and have a conversation rather than just flat out selling. It’s social media…be social.

Pinterest, Facebook and Instagram come to mind as social media sites where retailers need to have a presence — possibly a sales presence. What I have seen as a positive evolution has been the focus on great imagery with plenty of different angles, and some of the savvier have been engaging. To Mr. Salvatori’s point, getting into videos is not easy (when done reasonably well). It takes commitment. It also takes being authentic (for most brands).

Fish where the fish are. But the message is the most important thing. Retailers need to stop being process-driven. Be purposeful and never confuse activity with accomplishment.

I’ll take a different angle on this. Retailers need to invest a lot more time on LinkedIn, and stop solely using it as a network to distribute their quarterly results or maybe a new store openings. Some retailers are doing an amazing job of leveraging the platform to provide a glimpse of their culture and their leaders, training and development opportunities, as well as great community partnerships. There’s a talent war in retail, and particularly if you’re looking for job seekers — what better place to see meaningful content?

Retailers need to think outside the box with social media. Social media is a lifestyle for most people. It’s not about discounts and promotions. To succeed, retailers need to become part of their customers’ lifestyle on the social channels they live in. And that means more than just Facebook, YouTube, and Instagram. Yes, you must be where your customer is engaging and if that means SnapChat, WeChat, Pinterest, or even LinkedIn, then that’s where you need to be. I agree with Ray Riley that LinkedIn is undervalued by retailers. With so many consumers wanting to know more about the culture behind a retail brand, LinkedIn could be the corporate communication vehicle they need to deliver that message.

Ultimately, it’s a two-way dialogue retailers need to create, not just a one-way push communication to their customers. Social media is all about engagement after all!

As long as one social platform/channel or another continues to reach a retailer’s target audience, bottom line, they should take advantage of the promotional opportunities there.

When it comes to social media, authenticity is key. Understanding what shoppers value will help align a grocers content strategy to ensure it connects with their target market.

When it comes to social media platforms, that varies by demographic as there are so many micro networking communities within the platforms that retailers need to identify their targets for each campaign and take the time to build a detailed strategy around them.

The best platform is whatever platform the the majority of customers are using. While being everywhere is nice, it’s not always necessary. That said, if a customer uses a social platform for customer service, you need to be there. There are plenty of programs that will monitor mentions on all channels.

Many retailers do two things that can be improved. The first is using social media for blatant promotion. There needs to be value added content to be most effective. 100% promotion will eventually turn off the customer. And, second, is that when it comes to comments generated from customers on any channel, including review channels, some retailers don’t respond quickly enough. Also, retailers should respond to both negative and positive comments.

Messaging apps, like Facebook Messenger are gaining in popularity. Again, retailers need to be where their customers are.

It may be an unpopular view, but I think that social media isn’t the best channel for all and every retailer. There are cases when other channels may provide you better ROI.

Also, I think it is important to distinguish between using social media as another digital advertising channel and try to be “social.” The latter is even harder and relevant for even less share of retailers.

Not sure about everyone, but I as a consumer am not really interested to “have a conversation” and “engage” with probably ~90% of brands that I respect and purchase.

Braintrust
"The best social media platform for retailers is the platform being used by the customers they want to get closest to."