Do alcohol and shopping mix? 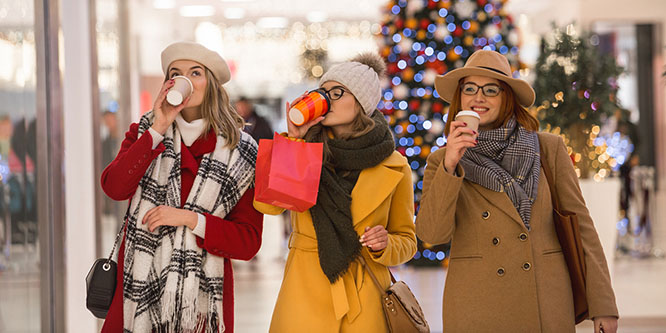 More shoppers in Virginia will be able to drink alcohol beverages openly at shopping centers if a recently-introduced law is passed.

Currently, four shopping developments have open-container access licensees in Virginia: Fairfax Corner, Loudoun Station, the Village at Leesburg, all in Northern Virginia, and 5th Street Station in Charlottesville. The license lets shoppers purchase alcohol in a restaurant or bar and take it outside to enjoy while they walk around and shop.

“It’s very much to get people away from their computers and shopping online and out into the community, into their neighborhoods,” Senator Barbara Favola, the lead sponsor of the bill, told Fox 5 in Washington D.C. “Retailers believe they really have to create a destination environment.”

Currently, only mixed-use developments of at least 25 acres in size can apply for an open-container access license from Virginia’s Alcoholic Beverage Control (ABC) bureau. The bill would trim that requirement to 10 acres or more.

“ABC was just saying that more and more communities are asking about this, and that 25 acres is a bit of a heavy lift for some of our urban areas,” Ms. Favola told Washington Business Journal.

Developments would still need to have at least 100,000-square-feet of retail space and include “national specialty chain stores” and a mix of dining, entertainment, office, residential or hotel establishments.

In November, Desert Ridge Marketplace in Phoenix became the first shopping center in Arizona to allow such open-alcohol consumption. David Larcher, president at Vestar, the owner of Desert Ridge Marketplace, said in a statement, “You can get a drink at a movie theater and walk around resorts and golf courses with a cocktail, so why not retail centers?”

DISCUSSION QUESTIONS: Are there more pros than cons in expanding open-container drinking at shopping centers? If successful, should access be expanded to enclosed malls and other retail channels with some restrictions?

Please practice The RetailWire Golden Rule when submitting your comments.
Braintrust
"Are there more pros than cons? I think with the current state of retail, it is certainly worth a shot, no pun intended."

"If you show just a bit of trust, and let people live responsibly, the overall societal effect will be positive and you can deal with law breakers as they pop up."

30 Comments on "Do alcohol and shopping mix?"

There are definitely some risks when mixing alcohol and an area where teenagers commonly hang out without parents, but if alcohol is served in the restaurants in those malls anyway, I am not sure how much risk is added with “to-go cups.” If strong security measures can be established, I see this as another step toward the future of retail as a holistic experience, rather than an isolated “shopping” activity, and I support the measure.

I have seen this trend as food markets have begun to offer beer/wine in store. What I have seen is a few things:

It is a natural extension to open this up to retail centers — of course rules have to be in place and city, state, and county laws have to be followed, so why not?

I’ve been surprised how few retailers have embraced this possibility. Look at Restoration Hardware, with its spare-no-expense flagships that serve drinks and food. The better to sell those pricey sofas! Visions of college kids boozing it up can kill the buzz but in general, looser customers are good for business.

Well clearly it will help loosen up shoppers and should help retailers ring up more sales but it is a slippery slope. It is true that drinking is allowed in other “family friendly” areas like amusement parks and sports arenas, but it is also true that some folks tend to get out of hand and need to be controlled so time will tell. Northern Virginia is a very family oriented area with many wineries, breweries and distilleries that families go to so why not try it at shopping areas? Are there more pros than cons? I think with the current state of retail, it is certainly worth a shot, no pun intended.

As evidenced by studies regarding alcohol consumption in different countries with their different cultures, open consumption of alcohol has a lot less to do with “where” and much to do with “how much.” Among cultures where wine is consumed from an early age and always with a meal, this would not even have become a question. “A meal without wine is called breakfast.”

I’m wondering why I’m not moving to Virginia (because I’m pretty sure it’s not going to happen in Georgia in my lifetime). The only negative I see is if someone is over-served. All the players in these environments have a vested interest in making sure that doesn’t happen. Let’s take the drinking out of the house, away from the computer, and in public where it belongs.

To answer the question of whether shopping and alcohol mix, heck yes!

These four areas are upscale and attract a responsible adult clientele. Making a hot toddy available during Christmas shopping sounds like a great way to get customers away from their computers. Here’s to sipping and shopping!

To your point, many upscale retailers offer their customers (within their own four walls) a glass of Champagne. The open container is the next evolution.

And look at the bar in Neiman Marcus in Hudson Yards!

And I remember the Nordstrom at the Galleria Dallas had a bar built on the ground level where it is mostly men with beer watching sports while the women shopped. I always joked they should issue claim checks like it was a coat check, LOL!

Desert Ridge in Phoenix is local to me. It is an open-air shopping complex spread out over a large area. Allowing open consumption makes sense as there are many areas to sit and relax all around the property, including a large seating area with a stage where musicians and others perform. Being able to consume alcohol in these areas makes things more pleasant for most consumers. The key, however, is to ensure that consumption is responsible and that things remain civilized. In Desert Ridge, there is a good security presence and a nice mix of age groups and demographics: this has helped to ensure that things do not get out of hand.

I live near Desert Ridge too, Neil, and you describe it accurately. My problem is that any new idea where there also has to be a way to ensure that things stay civilized and do not get out of hand might not be such a good idea. Security personnel now have to define what “out of hand” actually means.

I’m all for taking a shot, pun intended, at new concepts. On the other hand, I am with Ian on this. Let’s see what “out of hand” means in terms of both the shopping experience and the cost to patrol. For my 2 cents.

Obviously shopping malls aren’t doing what they have to, to attract shoppers. If there is actually anything they can do at this point. But personally, alcohol works for me.

Alcohol and shopping are a great mix – just look to the new Nordstrom in NYC as a fine example, offering libations on every floor, including having the cocktails delivered to you in the shoe salon. Will the next thing be offering free drinks to loyal customers similar to what Southwest does in the air?

Martinis and Manicures are popular indie retail events, some Nordstrom locations have bars on the sales floor, in some cities you can shop with a “traveler,” grocers invite customers to shop with a glass of wine in hand, and everyone at the mall already carries Starbucks, a Big Gulp or a bottle of water. Am I worried about ruining merchandise? Not so much. This novel idea will attract shoppers, I say go for it.

To keep consumers safe, shopping centers will need to use best practices to monitor and enforce consumption limits, and encourage the use of Ubers or designated drivers. Virginia will act as a case study of the balance between stimulating retail consumption vs. protecting public health and safety.

Agree! Trouble is now they can do both. Not exactly a brilliant retail strategy IMHO.

Incorrect. It is against the law in Virginia to consume alcohol while carrying a firearm (both concealed, or openly carrying).

So if I understand many of the other comments, the best, perhaps only, way to draw people to a shopping center is to let them drink as they walk around. Gosh this really opens up some possibilities. It may be a way to increase church attendance for example.

Does no one else find this kind of a sad commentary on our society? The only way to “get people away from their computers and out into the community” is to encourage them to walk around drinking. And we’re going to make it a law!

It isn’t the best, and definitely not the only way to draw people into malls. People are already consuming alcohol at malls. This just allows them the freedom to take one to go, or finish the one they had already started.

Americans spent around $40 billion last year on “drunk purchases,” most of which were online (with Amazon being the most popular). If anything, this law would allow brick & mortar to share a piece of that pie.

Anything that increases traffic in shopping centers is a good thing and certainly should be expanded to enclosed malls. If consumers can drink in restaurants in malls, why can’t they take a drink from one of those restaurants to go shopping? Consumers can take Starbucks around a mall…

All I know is I can’t even get in a Whole Foods when they’re having one of their “5 at 5” wine evenings. It’s like a giant party. I’ve always thought, though, as with anything in retail, you’d have to be prepared for the old Murphy’s Law syndrome and, in this case, that’d be pretty daunting! A drunken, belligerent customer calls for a whole different kind of employee, that’s for sure! Bouncers at the door? Not so good.

The first example I thought of is Nordstrom in Chicago, which installed a bar/cafe in the middle of the men’s floor. It’s always busy, along with the rest of the store, but is definitely a magnet for shoppers. It may not allow “open carry” but clearly adds an element of socialization to the retail experience — essential these days.

But yes, retailers do bear some responsibility — if they turn into bartenders — to control their customers’ intake. The liability and possibility of collateral damage (at the mall or on the drive home) is just too high to avoid being responsible.

Seems like a fair option given all the other places competitive with shopping malls where people spend time and are also able to drink. The “driving back” from the mall part bugs me a bit, but as others have pointed out — it’s a level of concern equal with other venues that people already drive to where alcohol is available, such as restaurants, in any event. Cheers.