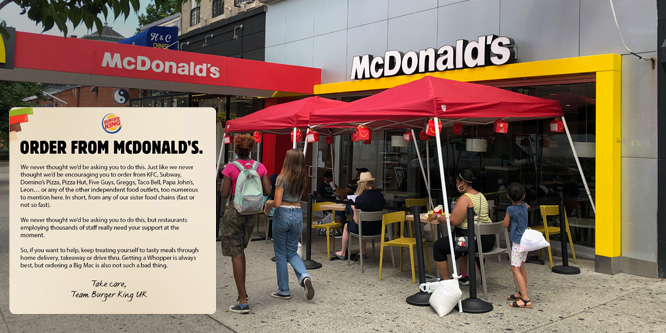 Restaurants from the largest chains to mom and pop eateries have been hit hard (re: decimated) since the novel coronavirus began breaking out in countries across the globe. Hard times have heightened competition for customers in a market affected by restrictions on sit-down operations, social distancing requirements and greatly reduced customer counts.

In what would typically be considered a counterintuitive move, Burger King in the UK has issued a statement on social media asking customers to support many of its fast-food rivals including arch-competitor McDonald’s.

The chain’s tweet reads, “We never thought we’d be asking you to do this, but restaurants employing thousands of staff really need your support at the moment. So, if you want to help, keep treating yourself to tasty meals through home delivery, takeaway or drive thru. Getting a Whopper is always best, but ordering a Big Mac is also not such a bad thing.”

The fast-food industry in England has taken hits to the top and bottom line since the pandemic first broke and more recently as cases have gone on the upswing as colder weather sets in. The competition for a share of a now smaller market makes Burger King’s messaging all the more remarkable.

The same, however, can not be said of the American division of the burger chain, according to a CNN report. Burger King in the U.S. recently ran a Halloween-themed promotion that offered a free Whopper to customers who drove by one of “the scariest places on Earth” to get it. The very scary places, as it turns out, are McDonald’s, Jack in the Box, Sonic and Wendy’s. To get the free Whopper, patrons confirmed they passed within 300 feet of one of the rival locations using the Burger King app.

Fast-feeders are not the only restaurant operators struggling in the pandemic. A New York Times report published this week looks at the role that eateries play in the social and commercial lives of city neighborhoods and shopping areas, particularly when it comes to attracting younger residents. The U.S. restaurant business has been among the hardest hit industries in the U.S. Yelp figures show that over 32,000 restaurants and 6,400 bars and nightclubs that were open for business on March 1 had closed by the end of August.

DISCUSSION QUESTIONS: What is your reaction to Burger King’s social media post in the UK and the campaign to encourage business for fast-food restaurants, including rival chains like McDonald’s? Would a similar effort be successful in the U.S.?

Please practice The RetailWire Golden Rule when submitting your comments.
Braintrust
"What an amazing initiative by Burger King U.K. to support the restaurant industry!"

"One of the best ways to grow your business is to grow the market for what you are selling. One great marketing campaign."

"Burger King will “earn points” with consumers for this – and actually be remembered – a great first move."

18 Comments on "Did Burger King just ask consumers to buy a Big Mac?"

Burger King has always excelled at marketing and this campaign demonstrates that they haven’t lost their touch. The post feels completely genuine and it has a sense of “we’re all in this together.” Such unity is desperately needed right now, and that’s one of the reasons why it has resonated with so many people. Currently, the U.K. and European lockdowns are much more severe than most of the U.S. and the impact on restaurants is devastating, as such the message may work here but I don’t think it would be quite as effective.

Friendly fire is always a winner as the Burger King U.S. promo showed. The U.K. version is more elevated and also a new tack which I think works well. I think anything that gets people to think about eating out and supporting business is great. The fact that they didn’t do it with a 50 cent off coupon is a bonus.

This is not surprising at all and I would hope businesses in the U.S. would do the same thing. It encourages support for all fast food restaurants where the urgency for sales is the same.
Good for them.

There is clearly strategy and some clever people behind this. Burger King probably knows that many customers who might try a competitor will return to Burger King with more appreciation, but this stands out as a very honest call for unity at a time when people are responding to sincerity.

I’m a bit blown away by this. Burger King is lucky to have a really dynamic and creative global CMO who I think has done really excellent work. While I don’t know if he was involved in this campaign, it is in keeping with Burger King’s innovative messaging. I think their customers are going to react positively to this. I would also suspect that this will appeal to McDonald’s customers who haven’t thought about a Whopper before. I wish we saw more of this in our business.

What an amazing initiative by Burger King U.K. to support the restaurant industry! It definitely leans towards emotional messaging and is very apt for this environment where the consumer’s emotional dimension is intensified. I can see such an effort being successful in the U.S. as well.

You know these are unprecedented times when Burger King steps up and encourages consumers to buy a Big Mac. The food industry, and now the fast-food segment has been significantly impacted by the COVID-19 pandemic. Burger King has historically had edgier advertising, which adds an element of self-mockery and humor into the mix. Well done Burger King!

The message may help McDonald’s and other restaurants, but it certainly helps consumers’ perception of Burger King whether they like their food or not. It just went from being one of the burger places to the being the burger company with empathy for its greatest competitor’s situation.

Let’s not forget that many Burger King restaurants, and McDonald’s as well, are indie owned franchises – independents are doing what they can right now to support one another so their businesses survive. The way Burger King has phrased it, “Getting a Whopper is always best, but ordering a Big Mac is also not such a bad thing” is funny, and typical of Burger King humor. The shoutouts to other “fellow burger joints” on Twitter are continuing the conversation. Well done, BK!

This has certainly made waves in the U.K. media. The imminent lockdown is creating significant issues for eateries of all kinds and there is a great deal of empathy across the industry. Enabling an order and takeaway model is critical and not everyone can do it. Burger King will “earn points” with consumers for this – and actually be remembered – a great first move.

This certainly isn’t business as usual and certainly not competition as usual. I love the spirit of the U.K. initiative. Let’s get through this with some mutual support and duke it out for market share on down the road.

The key message in here is that we are all in this together and the focus is on “employing thousands of staff.” Burger King did a great job here in humanizing big business. People, especially those operating small businesses, will see the message and remember it.

One of the best ways to grow your business is to grow the market for what you are selling.
One great marketing campaign.

VERY COOL! It takes some courage to make a statement like that. And, look at the publicity it’s getting Burger King. It worked! All that said, let me remind everyone that when a rival fast-food restaurant moves in across the street from an existing restaurant, often there is success for both. The rising tide floats all boats!

Burger King continues to show their cleverness and creative marketing approach. At some level, you can believe that Burger King knows that if they encourage more restaurant ordering they will continue to get their share of that market as they always have. Ultimately, they are going for a “rising tides lift all ships” approach. Given how hard the restaurant industry has been hit by the pandemic this is not such an odd strategy after all! Then there is also the aspect of making the Burger King brand appear “friendlier” to their target audience. Could this work in the U.S. as well as the U.K.? Absolutely. The “restaurant wars” are not a zero-sum game!

A cynical person might wonder if maybe there’s so much take-out business that they can afford to (seemingly) be generous, or if they’re trying to guilt McD’s into doing the same (I’m not saying either is true only that they’re something to think about). Beyond that, I think the move is novel, but not likely to have much impact: people don’t need permission, nor IMHO are they likely to be much moved, by BK’s foray into being a dining guide.

It certainly earns BK some good social media goodwill. I would expect something like this from Wendy’s Twitter given they have a free rein on many topics. Good to see Burger King decide to put a little levity and unity in the tough situation everyone’s in.

I do believe the only company that could pull off this kind of message would be Burger King. It’s right in their wheel-house for reverence and authenticity. It’s also very smart. All boats rise when the category rises. It’s a tough but honest thing to do to admit that you need your competitors. It’s also just not much fun without them.

The US Burger King Team can take a page from their UK Team on how not to be tone deaf and alienating during a time when we really all need to support each other.

Braintrust
"What an amazing initiative by Burger King U.K. to support the restaurant industry!"

"One of the best ways to grow your business is to grow the market for what you are selling. One great marketing campaign."

"Burger King will “earn points” with consumers for this – and actually be remembered – a great first move."