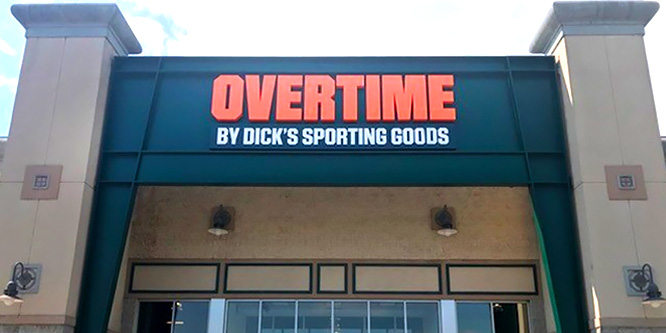 OVERTIME by Dick’s Sporting Goods will offer discounts up to 75 percent off Nike, Adidas, Under Armour and other brands Dick’s carries across categories. The retailer wrote in a statement, “New markdowns will be added throughout the year, keeping inventory at these outlet centers fresh for shoppers.” Including the three stores opened last year, Dick’s will have 11 outlet and clearance centers open in nine different states.

Dick’s officials haven’t explained the reasons behind the openings, although the moves come as inventory levels have become elevated across retail due to store closures caused by the pandemic. The sporting goods industry took about a year to overcome the promotional pressures caused by the liquidation of Sports Authority in 2016.

On its first-quarter conference call on June 2, Dick’s officials said inventories were down two percent year-over-year. The decline was helped by promotions and a $28 million inventory write-down on top of deferred and canceled planned receipts.

“We feel great about our inventory position where we’re chasing inventory,” said Ed Stark, Dick’s CEO, on his company’s conference call. “We’re actually buying some off-price inventory from some of the brands that, for whatever reason, they have available.”

Off-pricers, in general, have been outperforming in recent years and historically benefit from downturns when customers are looking to stretch their dollars as far as possible.

DISCUSSION QUESTIONS: What do think is behind Dick’s Sporting Goods’ introduction of clearance stores? Does it make sense for Dick’s to have off-price banners?

Please practice The RetailWire Golden Rule when submitting your comments.
Braintrust
"To remain standing [Dick's] must reinvent themselves and this is a great start at exactly the right time."

"I think this is more of a have-to, not a want-to. Instead of paying third parties to get rid of merch, they can keep more of their money."

Off-price is one of the winning types of retail concepts and I believe Dick’s new clearance concept will do well. This new concept has many potential benefits two of which include: 1.) tapping into the price consciousness of consumers, which is especially important now with high unemployment/uncertainty, and 2.) as a mechanism for selling through old merchandise. Notwithstanding the potential for cannibalizing sales at their full-price stores, I think this move makes good sense for Dick’s.

I think this is more of a have-to, not a want-to. Instead of paying third parties to get rid of merch, they can keep more of their money. That said, when products that are 90 percent off are out there with your name on them, I can’t help but believe it will lead shoppers there first. This could exacerbate pricing problems and traffic problems.

I have always thought of Dick’s Sporting Goods as a high-end sports store that always has a great assortment but you are going to pay for that assortment. The Sporting Goods Clearance Outlets are an extension of the store and if located away from the regular store locations, will probably do well.

Customers love a deal! It’s that simple. Take a look at the success of outlet stores. It makes sense for Dick’s to move unsold inventory through a retail channel such as this.

Retail inventory is generally a perishable commodity that gets less valuable over time. A significant portion of Dick’s mix is apparel which has historically been highly seasonal (people buy ski apparel at the start of ski season, not in the summer). Worse, many of the occasions that would drive sporting good sales didn’t happen because of COVID-19 shelter-in-place conditions. Kids didn’t have hockey season, people didn’t buy new NBA jerseys, etc. So Dick’s, like most of the rest of retail world, is sitting on too much inventory that’s misaligned with customer demand. Add to that the fact that Dick’s wholesale partners all made too much inventory that they are undoubtedly looking to unload.

Thanks to COVID-19, we’re at the very beginning of the mother of all liquidation seasons. Those retailers who can best reach their customers, especially digitally, are in the best position to succeed in this liquidation. Traditional discounters like TJX are not very good at digital, so it creates a whitespace for some line like Dick’s to launch new omnichannel liquidation concepts.

As long as there is not a cannibalization of sales from their main store fleet, I think this makes sense as a way to eliminate old inventory. Dick’s needs to be careful of the “sugar high” that comes from the high sell-throughs of the off-price world as a pendulum swing too far over to this strategy will cause reduced margins.

I think it is a smart, not so uncommon strategy. It will meet the objectives and will not dilute the value proposition of the full price retail stores.

This is a smart way of clearing down inventory. Off-price is doing so well right now and Dick’s creating its own formats to sell off excess stock makes perfect sense. Provided this concept is not overexpanded the cannibalization with mainstream stores should be minimal.

There are at least two driving forces that make clearance stores a smart choice for Dick’s Sporting Goods. First, reducing inventory carrying costs of slow moving or last season’s products will help them sell merchandise fast at stores where consumers expect deep discounts. Moving clearance merchandise to discount stores will also help protect the brand at traditional Dick’s stores. Secondly, consumers are prone to shopping online for good deals on sporting goods and it has made the sporting goods retail segment hyper competitive. Consumers expect deals and the new discount Dick’s stores should be successful. However, it does seem a little complicated to establish two discount branded stores: OVERTIME by Dick’s Sporting Goods and Dick’s Sporting Goods Warehouse. I know the warehouse stores are temporary, but it seems like they could simplify things by moving that merchandise to the OVERTIME stores.

I think it makes perfect sense for Dick’s to enter the off-price sporting goods business. They are creating a new space and have little or no competition. The history of off-price success following an economic downturn has been well documented so what better time to launch this concept. Many sporting goods retailers have been
disintermediated by the vendor community which leaves Dick’s as almost the last chain standing. To remain standing they must reinvent themselves and this is a great start at exactly the right time.

Totally makes sense at this juncture given the excess inventory that needs to move while retaining at least some of its value. At least it helps reduce the loss on the inventory or the need to stockpile it for later, which of course does nothing for sales.

Most retailers need an efficient way to clear inventory, particularly if seasonal. Writing off $28 million of inventory may make it disappear from the GL, but it still needs to be physically moved along to disappear from the stores and DCs. For now and for some unpredictable span of time into the future there’s more than enough unsold inventory out there to keep the clearance business booming.

Did Old Navy cannibalize Gap? Is Backstage downgrading Macy’s? Did outlet stores hurt Loft? Going way back, did Express kill The Limited? I’d say pick a lane and be your best and don’t try to be something you’re not due the whims of the moment. Besides, can’t you have “sale” within your own departments anymore? The other thing is, isn’t “discount sporting goods” Walmart’s territory? Do we want to compete with THAT? I’m not behind this idea. Be yourself, you already own the market.

Behind the Dick’s Sporting Goods clearance stores is 1.) reducing the excess inventory left from the store closings during the coronavirus spread, and 2.) having an outlet for reducing inventory of items not selling well. This formula seems to have worked well for many other clothing chains like Nordstrom and Macy’s and should help Dick’s balance its inventory better by clearing out slow-selling items instead of these items sitting in a full-price store taking up space and cash.

Dick’s Sporting Goods is in a unique position, where they have pivoted their customer-first strategies to offer value to their loyal base throughout all shopping channels. Their investments in digital-first capabilities, with the right supporting technological infrastructure, are paying dividends.

There is, however, an excess of sporting goods inventory in the market, and with the reopening of our economy there is an element of pent of demand for Dick’s Sporting Goods to capitalize on in both their full price and new off-price store formats. In addition to an off-price format, expanding their private label strategy will enable Dick’s to be less dependent on the wholesale market. They will be able to offer a diversified and differentiated value-driven product offering that could help not only drive revenues and margins but help to acquire new customers.

This is a great idea. Dick’s must have excess merch due to COVID and this is a great way to clear that out and it lets them experiment and see what works! As long as the locations are spread out and they can avoid cannibalization — and it seems that that is the case — this is a great idea. Everyone loves a bargain, especially parents and sportsmen, and may be watching their finances more closely now.

Dick’s has made some serious missteps over the past couple of years with their merchandising by severely scaling back some categories and exiting from certain categories to make political statements. That is fine; Dick’s has had good financial results despite these moves to this point. Other retailers who continue to sell products Dick’s has discontinued, and have not made the public statements Dick’s has made, appear to be taking market share from Dick’s. But now it appears the wheels may be falling off at Dick’s. Maybe too many items have been discontinued. Maybe customers who said in a focus group that they thought it was a good idea that Dick’s exited certain categories are now becoming frustrated when they go to Dick’s and can’t find what they need. Or maybe the problem is that it is just too much easier to buy this stuff online at a lower price than Dick’s … which is a problem all retail is having. I think Dick’s is going to be in for the same problem as the other… Read more »
4
|
-2
-   Share

I applaud Dick’s for having rapidly brought control over their current inventory position in this environment and for having a strategy leveraging their fleet to bring a unique value proposition to their customer that at the same time addresses liquidation on a sustained basis. While the immediate impact is a hit to the gross margin, this will help elevate traffic and as Dick’s resets their sales forecast they will challenge their suppliers on costs while resetting retail price points which should allow them to manage these benefits against the cost of liquidation with the added benefit of introducing the customer to a broader product offering.

Braintrust
"To remain standing [Dick's] must reinvent themselves and this is a great start at exactly the right time."

"I think this is more of a have-to, not a want-to. Instead of paying third parties to get rid of merch, they can keep more of their money."