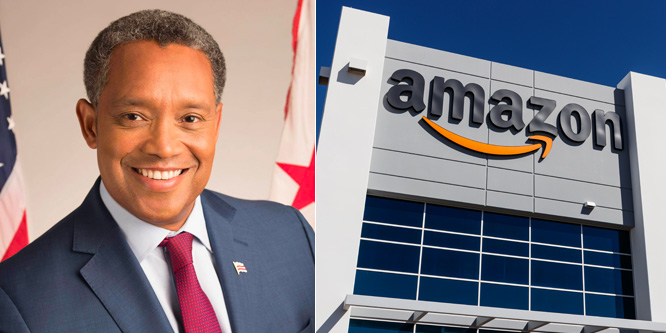 Karl Racine, the attorney general of Washington, D.C., has filed a lawsuit against Amazon.com in federal court charging the retail and technology giant with exercising monopoly power by blocking third-parties selling on its marketplace from offering lower prices or better terms when selling the same items on other sites, including their own.

So-called “most favored nation” (MFN) agreements, Mr. Racine claims, effectively result in marketplace sellers having to incorporate higher fees charged by Amazon, which may represent as much as 40 percent of a product’s selling price, on other platforms operated by Walmart, eBay and others. The result is that artificially high prices are established, causing harm to both the sellers and consumers, while limiting choice and competition.

The suit filed in D.C.’s  Superior Court Civil Division points to Walmart as a point of comparison to make its case.

“Walmart charges no setup, subscription, or listing fees, only a referral fee on each sale,” the complaint reads. “TPSs (third-party sellers) who choose to use Walmart’s Fulfillment Services program are charged a fixed monthly storage and fulfillment/delivery fees that are significantly less than what Amazon charges. Walmart sellers are not forced into a $39.99 monthly subscription.”

The fact that so few marketplace sellers abandon Amazon for alternative options is evidence of its monopolistic power, according to the suit.

“We filed this antitrust lawsuit to put an end to Amazon’s illegal control of prices across the online retail market,” said Mr. Racine in a press release. “We need a fair online marketplace that expands options available to District residents and promotes competition, innovation, and choice.”

The D.C. attorney general said that Amazon claimed in 2019 that it had ended its “price parity policy” but that, in reality, it had simply replaced what went before with an “effectively-identical substitute” known as its “Fair Pricing Policy.” The current program still results in the same penalties for sellers found to offer better deals elsewhere. Amazon subjects violators to sanctions or removes them from its online marketplace altogether.

Amazon claims that marketplace sellers alone are responsible for setting prices on their products.

“Like any store we reserve the right not to highlight offers to customers that are not priced competitively,” Amazon said, according to The Wall Street Journal. “The relief the AG seeks would force Amazon to feature higher prices to customers, oddly going against core objectives of antitrust law.”

DISCUSSION QUESTIONS: Do you see Amazon’s “Fair Pricing Policy” as being anticompetitive? Do you know of other similar agreements in force at other large retailers, whether online or in physical store environments?

Please practice The RetailWire Golden Rule when submitting your comments.
Braintrust
"As it becomes even more huge, Amazon should take care to review its policies with an eye toward antitrust violations."

The key issue is pricing to consumers and, in that regard, Amazon has generally always pushed to lower prices for consumers. This approach has provide Amazon with cover for their less than friendly policies and programs like forcing ad spends, demanding sellers offer lower pricing and of course the dubious effort to use marketplace sellers’ data to create competing house brands. Amazon’s approach to marketplace is uniquely their own and, while it has been tremendously successful, the impact on marketplace sellers is becoming problematic and dysfunctional.

There is so much faulty logic in this lawsuit which is a political play masquerading some kind of consumer protection activity. First of all, Amazon owns the marketplace that it built. As such, it has a right to set its policies on pricing and other matters. Second, the fact that the attorney general is using a comparison with Walmart’s marketplace shows that there are alternatives out there and that Amazon is not a monopoly. Third, Amazon isn’t a monopoly as D.C., and everywhere else, has plenty of other retailers that consumers can use. It’s abject nonsense to say that there is little choice in retail. Fourth, the attorney general bemoans the fact that sellers don’t abandon Amazon and claims this is proof of a monopoly. Well, no, not really. It’s proof that Amazon actually delivers for sellers and is of enormous benefit to them, hence why they remain with Amazon. Fifth, I find the claim that Amazon has resulted in higher prices absurd. This has not happened in practice and you’d struggle to find anyone… Read more »
11
|
-4
-   Share

Yes! What Neil said — with one minor quibble. The mere existence of competitive alternatives in the marketplace (i.e. Walmart’s marketplace) is not de facto evidence that Amazon is not a monopoly. But I’m guessing the point intended is that Walmart is an effective competitor due to the size and growth of their online marketplace — and that is. Great job Neil.

I am no legal expert. But this reads as being significantly weaker than other similar cases in the past – the flap over pricing e-books at $9.99 between Apple and Amazon or the current spat between Apple and Epic about in-app purchases.

I think Amazon is on thin ice when it comes to anti-competitive behavior based on how it may favor its own private labels in search results, or how vertically integrated it is, resulting in a near-monopoly. But in this specific case, I think Amazon is on solid footing.

I am pleased to see this action. Though I don’t know the legalities well enough to know how it will turn out.

Regardless, after claiming to be the small business’s friend, Amazon has turned out to be a poor partner as they have leveraged their power to force small business deals to turn sour. Yet given Amazon’s volume, it is not realistic for those businesses to move elsewhere – it’s a serious Catch-22.

For years I’ve advised small businesses to be careful with Amazon as they are an unreliable partner in many ways – this is one.

Doug, I understand your sentiments. If you don’t mind, a question — what was your position with clients on Walmart when they were growing? Same?

I wasn’t active in the industry when Walmart was growing. But, looking back, I doubt if I would have offered the same sentiments. Walmart was relatively reliable — stringent but reliable. Today I caution clients to be slow to approach Walmart because a big order at Walmart discount too early will undercut margins. They need to succeed and establish price stability elsewhere.

As to Amazon, the ad business has seriously harmed small business — in part with heavy competition from Amazon itself. And the ad biz has made it very hard to get your products seen. Amazon then lays on added costs (because they can) so that people I know who have succeeded with Amazon for over a decade now suffer badly.

Mr. Racine, who has a great reputation in D.C., appears to have an open and shut case. As it becomes even more huge, Amazon should take care to review its policies with an eye toward antitrust violations.

I’m not a lawyer, but — he says and goes on anyway — I think a good test with any restriction (or clause or covenant) is to ask “why is it (even) there?” Minimum price requirements often exist with luxury goods to preserve an upscale image. That doesn’t seem to be the case here, and I struggle to understand why it’s any of Amazon’s business what a retailer wants to charge elsewhere.

There’s no doubt Amazon twists the arms of its sellers to keep prices low — just as the DC suit states — in multiple ways. It eliminated the relevant clause in its seller agreement a few years ago, but the objective and many of the methods are the same. However. Antitrust is in general an exceptionally blunt instrument, and one that’s unlikely to change Amazon’s behavior significantly, especially in light of court rulings over the past 4 decades. But this suit is not even aimed at the most important target at Amazon. My analysis in “Behemoth, Amazon Rising” shows that Amazon loses massive amounts on its own 1P business — so it is systematically engaged in predatory pricing. An antitrust finding on that point could indeed force major structural change at Amazon. Still, the wider problem with antitrust is that it’s reactive, not proactive. It could take a decade to finally get a ruling, and by then Amazon would be a different company, and the targeted sellers would be out of business. It’s like one… Read more »
0
|
0
-   Share

Braintrust
"As it becomes even more huge, Amazon should take care to review its policies with an eye toward antitrust violations."