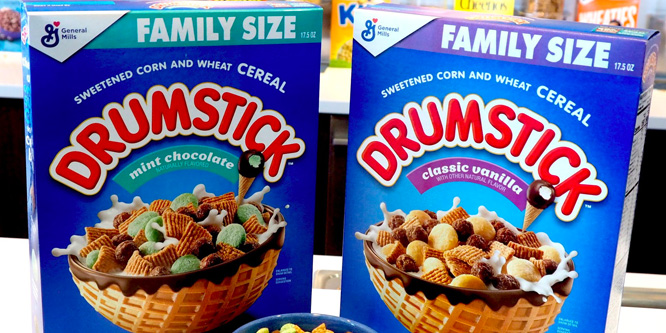 Crossovers aren’t just for comic book characters anymore as consumer packaged goods (CPG) companies are more frequently reaching across the aisle to other manufacturers to create product mashups that let both companies capitalize on their name brand recognition.

Coca-Cola-flavored Tic Tacs, Starburst-flavored Yoplait yogurt and Twinkies-flavored cereal by Post are a few of the cross-CPG collaborations mentioned by SmartBrief’s Audrey Altmann in her coverage of the 2019 National Association of Convenience Stores show, which describes an increasing number of this kind of cross-branded combos.

Brands are also trying to emulate the success of earlier CPG/restaurant brand mashups like the Doritos Loco Taco at Taco Bell. Kellogg’s-owned Cheez-it snack crackers will be making an appearance in Pizza Hut’s Stuffed Cheez-it Pizza, a calzone-like product. Taco Bell and Pizza Hut are both Yum! Brands companies.

Cereal brands have picked up on the trend more recently; in 2017 and 2018 Post began releasing cereal/snack brand mashups with Oreo’s, Nutter Butter and Chips Ahoy! in partnership with Mondelez, according to Adweek. Last year, the two teamed up again for a Sour Patch Kids-flavored cereal. Competitor General Mills got in on the act recently as well with Hershey’s Kisses- and Jolly Ranchers-flavored cereals, according to Adweek. In fact, sales of sugary cereals along these lines are up.

That sugary cereals are thriving on the grocery shelf may come as a shock given the extent to which both CPG in general and breakfast foods, in particular, have been disrupted by healthy eating trends.

The demand for healthier “better for you” snacks has compelled major CPGs to gain a foothold in the space, not so much through partnerships as through the acquisition of smaller companies. In 2017, both Hershey and Campbell Soup undertook such moves to diversify their product lines.

DISCUSSION QUESTIONS: What do you see as the pros and cons of brand mashups? Do you expect retailers to follow the example of foodservice chains such as Taco Bell and Pizza Hut and pursue mashups of their own with select CPG brands?

Please practice The RetailWire Golden Rule when submitting your comments.
Braintrust
"Whether between CPG brands or unlikely brick-and-mortar bedfellows, creating unique unions across seemingly disparate brands can be a BIG thing."

"How are these combinations even possible at a time when the food industry is touting healthy eating?"

"For products that are a combo of two brands, that provides at least one more SKU on the shelf for each of those brands. More visibility = more awareness. Not a bad thing."

The majority of brand mash-ups bring two bad-for-you foods together in a frankenfood abomination that allows each brand to use the other as a life preserver as both go under. The cereal brand combinations in particular are essentially the addition of cookies and candy to cereal, and feel like acts of desperation from the brand managers in an attempt to keep a dying category relevant.

You know, if it’s carefully thought out and it makes sense to the customer base, then why not? You get a two-for-one brand recognition and that is a plus for both brands. The Doritos Locos Tacos were brilliant – and pretty tasty as well.

The successful mashups tend to be in categories with a high level of variety seeking to start with. Cereals (particularly children’s cereals), both savory and sweet snacks, and fast food all fit that category. Gaining volume with these quick hit line extensions is much easier when another strong brand is involved. Built-in brand and flavor familiarity maximize trial with minimal advertising. No one has to tell a kid what Drumstick-flavored cereal is going to taste like. How long they last is another question. But it’s irrelevant when the strategy is to rotate novelty and variety in and out around core brand SKUs to begin with.

I’m a HUGE fan of what I have coined “newfangled collaborations.” Whether between CPG brands or unlikely brick-and-mortar bedfellows, creating unique unions across seemingly disparate brands can be a BIG thing. It not only brings excitement to a category (or retailer), but it also crosses audiences to build awareness for both brands and attract new consumers.

The pros are many, including: enthusiasm; newness; buzz; category expansion; portfolio diversification; and consumer engagement, to name a few.

There are, however, cons: loss of brand identity; alienation of shoppers; confusion; the “who’s in the driver’s seat syndrome,” and difficulty creating a unifying message.

Pro: Major CPGs get incremental sales from mainstream consumers that look for and want new, unique items. Most of these items are fads.

Con: The incremental sales are short-term meaning when next year rolls around, the CPG needs a new item fad to drive impulse sales to make their sales budget.

Pro: In many cases the mashups are cheaper to create and produce than the cost of a true innovation product development pipeline.

Con: As consumers continue to move towards better-for-you items these traditional brand mashups will become less and less relevant.

I love the idea, though I find some of the examples absolutely revolting. But that is OK. I won’t buy Jolly Ranchers-flavored cereal. Though I will buy Oreo Cookie ice cream.

There are two strong pros with these “mashups.” The first is that two brands are more powerful than one in shopper recognition. The other is that the shopper knows what to expect. I can imagine Coca-Cola flavored Tic Tacs better than just cola flavored Tic Tacs. I can depend on “Intel Inside” in my Lenovo laptop.

My reaction was similar to Ben’s – in a variety seeking category in-and-out products work well. We might argue whether this shows a lack of creativity or whether finding the right cereal flavor is a creative act (which doesn’t explain Jolly Rancher) but in a category like this, not a problem.

Brand mashups are just another way for brands to drive incremental sales beyond their core products and customer base. For many years, brand product managers were challenged to find new uses for products (e.g. baking soda in refrigerators) or create new recipes (e.g. smores) to drive incremental product demand. This is just another extension of those strategies. Brand mashups are a growing trend that appears to have long legs.

Mashups can be creative and engaging when done well. Then there is the downside.
Two examples: Sour Patch Kids-flavored cereal from Post Consumer Brands and Mondelēz, and Froot Loops Birthday Cake breakfast cereal from Kellogg’s. How are these combinations even possible at a time when the food industry is touting healthy eating?

For those products that are a combo of two brands, that provides at least one more SKU on the shelf for each of those brands. More visibility = more awareness. Not a bad thing.

Matt’s topic is interesting in-and-of-itself, but what really struck me was the comment “sugary cereals are thriving on the grocery shelf.” Wait, so the “smart food” movement was a fraud?…well, overhyped? Probably not, as much as the claim points out that a small segment can grow and become more important — less unimportant, perhaps — and yet still be less than a dynamic factor.

So back on topic: do I think cross branding will grow? Do I think it will be a major player? See above.

Braintrust
"Whether between CPG brands or unlikely brick-and-mortar bedfellows, creating unique unions across seemingly disparate brands can be a BIG thing."

"How are these combinations even possible at a time when the food industry is touting healthy eating?"

"For products that are a combo of two brands, that provides at least one more SKU on the shelf for each of those brands. More visibility = more awareness. Not a bad thing."