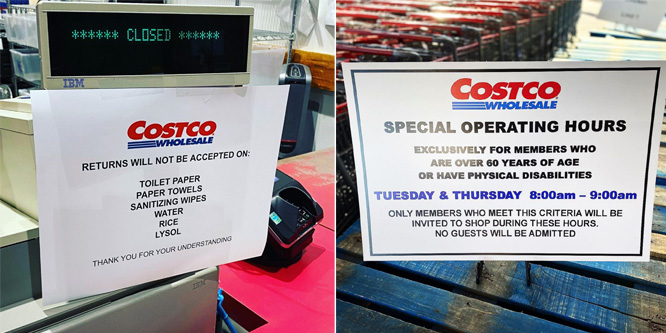 Costco recently began posting signs indicating that it will no longer accept returns on six items — toilet paper, paper towels, rice, water, sanitizing wipes and Lysol — that consumers have been stocking up in response to the coronavirus pandemic.

The signs in recent days began popping up on social media on non-affiliated Instagram sites such as Costco Insider, Costco Buy and Costco Deals. It’s uncertain whether the initiative is nationwide.

An employee at an Illinois Costco warehouse told Business Insider that the non-returns policy was for both sanitary purposes — to avoid the risk of tainted returns — as well as to discourage hoarding.

The move was praised on social media.

“This is such great news! I’m tired of all those people that buy toilet paper and think they can just return it later when they don’t need it,” one individual responded to an Instagram post.

“It’s about time! Too many people taking advantage of their return policy,” another said.

Costco in early March began placing purchase restrictions on certain items due to panic buying. CFO Richard Galanti said on Costco’s second-quarter conference call on March 5, “We’re getting deliveries daily. But it’s still not enough given the increased levels of demand on certain key items. It’s been a little crazy.”

Many stores are closing early to provide time to clean and restock stores. Costco and others are dedicating their first hour of opening to seniors and those with compromised immune systems to, not only help them avoid crowds that leave them susceptible to COVID-19, but to also give them a first shot at restocked assortments.

The ongoing hoarding has again led to some arguments that prices should be allowed to rise so supply and demand can reach equilibrium, although critics feel such a free-market solution would be detrimental to lower-income households.

Many government officials and store leaders are still trying to get out the message that hoarding isn’t necessary since grocers remain open and are continually restocking.

DISCUSSION QUESTIONS: Do you agree with Costco’s move to refuse returns of products that have been hoarded during the coronavirus outbreak? Do you see any other solutions to limit hoarding?

Please practice The RetailWire Golden Rule when submitting your comments.
Braintrust
"People who were attempting to profiteer or hoard just for the sake of hoarding deserve to get left stuck with a lifetime supply of goods they can’t return."

"While I agree with everyone here — the better strategy for Costco would have been to limit hoarding in the first place."

"Good for Costco! Customers shouldn’t be allowed to empty the store, cheating others out of accessing these products, then return them when the crisis subsides."

38 Comments on "Costco is refusing returns on hoarded items"

YES. Public safety is the primary concern and for anyone who has hoarded goods and then wants to return them, I say too bad. Returning product that might have been exposed to the virus could help spread the virus. It’s well within retailers’ rights to limit quantities and I think retailers should impose limits on fast moving goods. – This will ensure supply for others and minimize hoarding.

This brings up the question of returns in general. COVID-19 has a long shelf life on plastic, metal, glass and other materials. Not sure many retailers have thought through any new disposal, disinfecting, and restocking policies yet. Should all returned products be rejected?

It’s rare I don’t side with the customer, but there’s nothing normal about what is going on at the moment. Costco or any retailer shouldn’t have to pay for these consumers behaving foolishly.

I echo that sentiment. Besides, since these items were deemed to be so important that they needed to be hoarded they are, almost by definition, consumables that the hoarders are going to continue to need. The hoarders just won’t have to shop for those items for longer than most of us. Unlike bananas, these items won’t spoil over time. Yes to Costco!

Good! I hope other retailers do the same thing. This hoarding had no rhyme or reason – people were hoarding water and toilet paper, but also pillows, blankets, plastic flowers, multiple gallons of milk (not just two or three, but eight or more), etc. I just don’t get it.

I was out in markets yesterday and it was a little more civil in regards to buying as a lot of retailers put a limit of one on a lot of those items.

I just saw an article about a market in Denmark that had a unique approach to prevent hording of hand sanitizer. If you bought one the price was $5.75 but the price jumped to $143 for anyone who bought more than one.

I thought this was a very good move and people who were attempting to profiteer or hoard just for the sake of hoarding deserve to get left stuck with a lifetime supply of goods they can’t return. I also think Costco and others who can should put limits not just on single-visit purchases, but on repeat buying. Like, “you have exceeded your monthly allotment of toilet paper” in addition to “you can’t buy more than two packs today.” They have the data and shopper visibility to do it. An uncontrolled free market leads to people getting shot in parking lots or aisles. Let’s not let it get to that point!

This is a reasonable and smart returns policy. Hopefully, consumers will think twice on some of their hoarding purchases. I also heard that Costco was not allowing returns on some other COVID-19 inspired purchase, such as bidet seat covers. We will probably see a lot of these on Craigslist after the virus fears subside.

The customer is always right, except when they aren’t. These people weren’t right. Those who bought items at the hoarding level were denying others their opportunity to buy something they may need now, not some time in the future. Costco’s decision will not likely impact this type of behavior in the future but as Mark stated it does potentially protect others from exposure to the virus.

As long as customers are able to purchase these items, I agree with not taking returns. But what if, for example, a customer hoarded, felt badly about it, and tried to return items so others can buy them now? These items are still in short supply. Most Costcos have them, but they are limit-one. I’d fully agree with the policy if it were time-bound (i.e. returns won’t be accepted after Friday, March 27).

I absolutely agree with Costco’s no-return policies on hoarded items. It is a travesty to see people behave this way in times of a crisis. Rather than pass legislation directed at this problem, Costco’s approach will likely be followed by other retailers relieving the interest in hoarding. Retailers can limit the number of items per sale, throttling store purchases. Another solution is to increase supply. Producers who are able should increase production and take the pressure off the increased demand in stores.

Yes! Let the hoarders sit with their two-year supply of whatever, or find a way to give it away or donate it somehow. While the retailer could probably resell the product quickly, that’s not the safe or appropriate answer right now. The supply chain will catch up, especially if hoarding is penalized AND if retailers implement some kind of “one-per customer” rule. I saw a video yesterday of a customer who had bought out a Dollar General store of ALL of their paper products. Their pickup truck was being stacked high with box after box as other customers looked on. WHY would any retailer ever let something like that happen? Hoarding and price gouging cannot be tolerated. The guy that hoarded over 100,000 hand sanitizer products in hopes of making a buck should have provided a sufficient lesson to all. He ended up having to give most of it away.

Bravo Costco! I can’t wait too see one of the hoarders try to bring something back. 🙂

Yes this makes total sense. Costco needs to focus on serving as many customers as possible, not just making a few who have more money to spend happy. Plus, their store associates need to focus on re-stocking and ringing, not returns. The sanitary considerations are a side bonus.

I commend Costco for taking this position. More recently many retailers, particularly grocers, are limiting the number of items consumers can buy. We have a pandemic, but we also have mass hysteria from a few people that cause this craziness. The other day I was in a store and overheard a conversation with two people. One was talking about how pleased she is that her husband finished building the bunker over the summer, and all they’ve been doing is stocking up. This behavior is nuts! So it’s people like this that have got to be limited with what they can buy. In their minds, it’s all about “their” survival. We will ALL get through this. Yes we still have a hard road ahead of us, but we’re so much stronger together than independently. So if we have to limit quantities of an item and refuse returns on hoarded buying, that’s fine because it’s a matter of everyone getting through this and not just a foolish few.

Good move by Costco. There is some “extreme” behavior that is being exhibited by irrational consumers. Two things… First, I agree with the return policy. Second, retailers should have placed limits on these types of items to begin with. Both of these decisions come after-the-fact, now that we know what history has taught us. I side with the retailer on this issue.

Costco is right. Hoarding is bad enough, but trying to return unused items and adding to the pressure on retailers like Costco is beyond the pale. If hoarders find themselves with an excess of product, I suggest they give it away to the vulnerable and needy.

The fear that people feel is real and they need to control something in their life right now and it appears to be relieved by hoarding. It’s toilet paper in the U.S., pasta in Italy and rice in china. It is an almost universal phenomenon. But it isn’t rational. There is plenty of these items for everyone if people would just calm down but they can’t because they need to control something in their lives. Costco and now others need to step up to stop the madness.

Absolutely! Without question. I just wish there was a “Like All” button for my colleagues comments today. A “thumbs-up” to all.

Twenty years ago both brands and retailers could play the price equilibrium game any time they wanted, but today the stakes are too high and thankfully the wrath of the internet will put in check any who are greedy enough to attempt.

In hindsight, this seems obvious but all bets are off as far as any retailer knowing how to navigate this surreal landscape we find ourselves in. I applaud their actions.